Housing and health: hazards at home

My home is making me ill

In the first of a new series of articles, Mike Parrett considers the problems in UK properties that contribute to the ill health of occupants

The poor state of many UK buildings is a serious issue. Their condition affects the quality of life in some neighbourhoods and can cause significant health problems, which cost the NHS £760m a year. The scale of the issue is huge, with almost 6m serious hazards in UK homes that would cost an estimated £21bn to remedy (see Table 1).

Table 1: The costs and benefits to the NHS of reducing HHSRS category 1 hazards to an acceptable level in the UK. Source: The cost of poor housing to the NHS, BRE

* Data from The real cost of poor housing, BRE, based on 2005 and 2006 English Housing Survey (EHS) data for occupied and vacant dwellings

** Data from The cost of poor housing in Wales, based on 2008 Living in Wales data for occupied dwellings only

The housing health and safety rating system (HHSRS) was introduced as part of the Housing Act 2004. This empowers local authorities to act against landlords where housing conditions are deemed to affect occupants’ health adversely. The most severe are category 1 hazards that often constitute a statutory nuisance under section 82 of the Environmental Protection Act 1990. There are 29 category 1 hazards arranged into 4 main groups: protection against infection; physiological; psychological; and protection against accidents.

This series of articles will discuss the main HHSRS category 1 hazards and include relevant case studies. It will examine the causes of overheating, which relate to high external air temperatures, internal heat gains, the location and orientation of dwellings, ventilation, design and construction. It will also consider preventative measures to minimise these issues, and help address the failure of professional bodies to make the connection between ill health and potential problems in the home.

Another major problem is excessive cold, which often relates to people in fuel poverty – those spending 10% or more of their disposable income on heating their home – who live in a house with poor insulation and construction. There will also be those who are not in fuel poverty, but for whom heating their home is not a priority; they may have a frugal mentality but are at severe risk of hypothermia. The Office for National Statistics (ONS) has published Excess winter mortality in England and Wales. This shows that in the early 1950s, there were more than 100,000 such deaths a year; these had diminished to around 25,000 by 2015–16, but there are still many fatalities due to cold weather.

There are also deaths from overheating, as confirmed by the ONS’s Health Statistics Quarterly – No. 48, Winter 2010: Exploratory analysis of seasonal mortality in England and Wales, 1998 to 2007. Overheating in homes from the Zero Carbon Hub also states: ‘Long continuous periods of above-average indoor temperatures in homes are thought to be a significant factor affecting people’s health’ (see Figure 1). Meanwhile Overheating in dwellings from the BRE’s Centre for Resilience reports that the 2003 heatwave in Europe led to more than 20,000 heat-related deaths in France, England, Portugal and Italy. 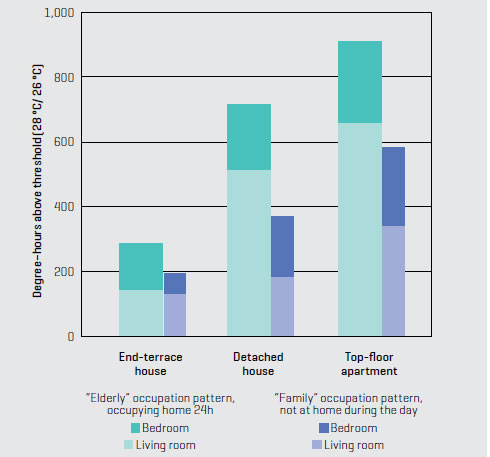 Figure 1: The potential extent of overheating: the modelled predictions for overheating during the 2003 summer heatwave in London show the number of degree-hours above 28°C in the living room and 26°C in the bedroom that could occur in some homes. The research is confirmed by temperatures recorded in homes in 2003. Source: Overheating in homes, Zero Carbon Hub

While heating and cooling might grab the headlines, there are less obvious issues that can harm occupants, such as the following.

There are 2 main categories of these.

I was involved in a case where a rented property had suffered a plumbing leak under the bath that had spread down to the ground floor. As it took a while for the leak to manifest, there was an outbreak of mould. The tenant persuaded his insurance company that the mould was severely damaging his health, having sourced information from the USA where the same issue had been linked to fatalities. Although there has not been a similar case in the UK, he believed he was going to die.

He persuaded the insurance company to move his family to another house. As he believed the mould had contaminated his clothing, carpets, appliances and TV, these were replaced, as were the wallpaper and plaster. Despite only having mild symptoms of asthma, his hysteria was so great he lived in fear that all his family would eventually be killed by the mould.

Even if a landlord attempts a repair, it often does not cure the problem and the tenant’s suffering continues, creating a vicious cycle

This was an extreme example of the psychological harm people experience when faced with problems in their home. However, I have seen many cases in social housing and with private landlords where people are living in homes with category 1 hazards of mould and dampness but feel they cannot do anything. They are physically ill but frustrated with their landlords, who do not fix the problems. Solving the issues can become a protracted process, and so tenants’ mental health deteriorates because they feel no one is listening. Even if a landlord attempts a repair, it often does not cure the problem and the tenant’s suffering continues. There is a vicious cycle of degradation that causes tremendous psychological harm to tenants.

In the past, tenants in social housing, for example, would be supported by housing welfare officers – with input from social services and external agencies such as Age Concern and the Citizens Advice Bureau – when working with in-house surveyors to resolve their property problems. Unfortunately, this relationship has become almost adversarial rather than collaborative.

The ‘support’ staff see themselves as looking after occupiers’ mental and physical health, while the surveying and technical staff involved with maintenance and repairs try to solve the myriad problems in the homes that were contributing to ill health. But often the support staff do not understand that sometimes the residents themselves cause problems, for instance by underheating their home. My article ‘The golden rule of surveying’ looks at this in more detail.

In turn, a tenant’s use and occupation is not an area in which surveyors have often been fully interested. I believe building surveyors should go beyond dealing with the physical building alone. A responsible surveyor, like a responsible GP, should connect the possible effect of the building with the occupants’ health. The culture of deciding who is at fault needs to be redressed.

The lack of multidisciplinary working seriously hinders tenant support, certainly in social housing, but it is also happening in the private rented sector. Tenants are dealing with individual landlords who might only have a small number of properties; landlords in the social sector with larger portfolios will have advice surgeries and reception centres for tenants with problems.

Unfortunately, the lack of joined-up thinking and collaborative working between the various professions, including building surveying, fails to address the physical problems of properties and the physical and mental illnesses of the occupiers. To function properly, multidisciplinary working must be based on knowledge. We need a pathological understanding of a building and a means of measuring and testing its various elements to discern whether it is contributing to the ill health of occupiers or whether they are causing the problems.

In January 2018, the government announced that it would support the Homes (Fitness for Human Habitation) Bill, brought forward as a private member’s measure by Karen Buck. Government support means that it is highly likely this bill will become law, amending the Landlord and Tenant Act 1985 to create a new duty on residential property landlords to ensure that a dwelling is fit for human habitation throughout the life of the tenancy. The fitness duty will be contained in a new section 8 of the 1985 act. Where a landlord fails to comply with this duty, a tenant can take legal action for breach of contract.

The duty will dovetail with the more familiar and existing obligations on landlords, outlined in section 11 of the 1985 act. This makes the landlord responsible for keeping in repair the structure and exterior of the dwelling; basins, sinks, baths, toilets and their pipework; and water and gas pipes, electrical wiring, water tanks, boilers, radiators, gas fires, fitted electric fires or fitted heaters. Responsibility for the last two groups of elements may vary for leaseholders, depending on the terms of the lease agreement. However, for tenants the repair responsibilities under the 1985 act override what the tenancy agreement contains. Also, a landlord is not allowed to pass on the cost of any repair work to a tenant.

There is an historical context to property issues affecting occupants’ health. Every type of building, construction process and material have caused problems that are often only revealed over time. For example, anthrax was once prevalent in many historic buildings because they used horse, goat and other animal hair in wall plaster.

But these issues do not just relate to the distant past; think of lead and asbestos in our recent history. These were once acceptable in construction, but we now know the awful effect they can have on human health. More recently, the wood dust from MDF has been found in some cases to be carcinogenic.

As technology develops, and new and innovative materials and methods of construction are used, do we really know what effect they will have on our health?

Mike Parrett is a building pathologist, chartered building surveyor and founder of Michael Parrett Associates. He is an Eminent Fellow of RICS and the lead author on the Damp section of isurv

Download a complete “Housing and health: hazards at home” PDF