Damp: use and occupation of dwellings

The golden rule of surveying

Continuing his series on the connections between building design, failure and occupants’ lifestyle, Michael Parrett considers how use and occupation contribute to damp problems

In considering the use and occupation of a dwelling, we should look at how humans function in a space that architects and builders have provided for them. How does this result in damp?

A fundamental cause is underheating, especially in social housing or rented properties. This may be because heating is expensive but provides little benefit, especially in thermally inefficient buildings; because the occupier is in fuel poverty, that is, spending more than 10% of their disposable income on heating their home; or because they spend their money elsewhere.

The Local Government Association’s 2013 report Tackling fuel poverty through local leadership stated that there were 3.5 million households living in fuel poverty in 2010, compared to one million in 2004.

Reports of condensation and mould are higher in the private rented sector than local authority or housing association properties, although when combined these latter groups are where most of all types of damp problem occur (see Figure 1). 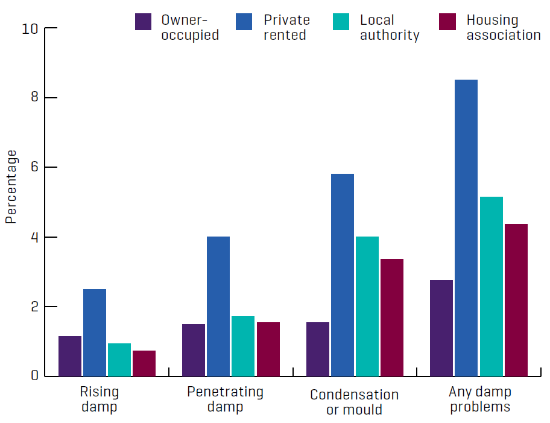 We have often found properties where internal temperatures struggle to reach 11–12°C in winter, and even cases where tenants never used their heating. However, internal temperatures below 15°C can seriously damage the health of pre-school children, the sick and the elderly. The World Health Organization recommends that an ideal internal temperature during winter in the northern hemisphere is 18–24°C. Overcrowding is another issue, especially in social housing, as the more people there are living in a property, the more moisture they produce through their daily activities.

Conversely, such properties also experience underoccupation, for example, where an elderly person is still living in a family home that is now largely empty. They often do not heat the entire property so many rooms remain cold throughout the year.

Ventilation is another major factor: it is common for through-wall air vents in old properties to be covered over to reduce draughts, while trickle vents in double-glazed windows are often covered by curtains or roller blinds, making them ineffective. People also tend not to open their windows, especially when it is cold or because of security considerations. These all demonstrate that occupiers often do not understand ventilation and condensation risks.

Other aspects of occupiers’ lifestyles that produce excess internal moisture include drying clothing over radiators, removing internal kitchen doors, historic use of liquid-based fuels such as Calor gas, running unvented tumble dryers, and cooking, washing and bathing. When combined, these cause increased moisture as a result of use and occupation, poor heating and reduced ventilation, creating an environment ripe for condensation.

Moisture moves from a centre of high concentration to one of low concentration. Condensation, leading to mould growth, happens when the moisture content of the air remains at or above 70% at any given internal temperature.

Table 1 demonstrates that the warmer the air, the more moisture it can hold and the higher the vapour pressure, and vice versa. When the temperature is higher, moisture moves away from its source, for instance the kitchen and bathroom, further into the property. As the air cools, for example in a bedroom, it can no longer retain the same amount of moisture. Water vapour-laden air then forms a liquid condensate on any surface where the temperature is below the dew point.

Table 1: The relationship between air temperature and water vapour (created by Michael Parrett Associates, based on psychrometric chart calculations taken from BS 5250:2002)

Table 2 shows that in every 24 hours, a typical four-person family produces a lot of moisture through normal daily activities. What happens to all this? Can it escape or be expelled from the building?

Table 3 shows that a dry occupancy produces around a third to a half of the moisture of a wet occupancy. 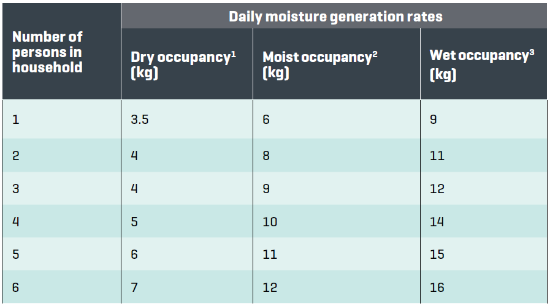 When the moisture content of internal air remains at or above 70% relative humidity, mould will start to grow on cooler surfaces such as walls and ceilings.

Any large items of furniture in an internal corner, between two external walls for example, will only trap water vapour-laden air and increase the condensate forming due to a lack of airflow.

To understand damp and mould, we have to go through a deliberate process of eliminating what is not causing it until we are left with what is

Humidistat-controlled extractor fans in kitchens and bathrooms are usually sensor-driven; typically, when moisture in the air reaches 65%, the fan will switch on to ensure that the humidity is kept below 70%. But if the internal temperature is too cold, the moisture may not be in a vaporous state long enough for the extractor fan to be effective.

If a property is adequately ventilated and heating levels are good – which may require good insulation – then mitigating moisture that results from use and occupation should be possible.

Damp bedevils many surveyors who, when visiting a property and finding mould on a wall, often make the automatic assumption that it is caused by the tenant’s lifestyle – certainly in the private rented or social housing sectors.

This is a huge mistake. The golden rule of surveying is to assume nothing. At this point, we still do not know whether the cause of the mould is the tenant, the property or a combination of both.

To understand damp and mould, we have to go through a deliberate process of eliminating what is not causing it until we are left with what is. This is driven by knowledge and measurement. 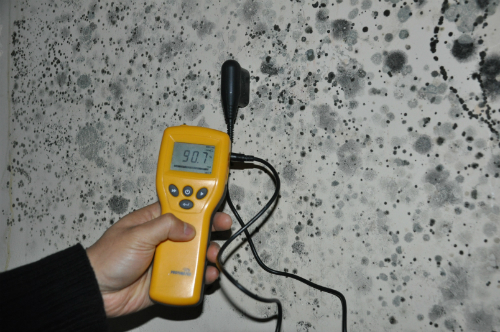 Figure 1: Severe Aspergillus and Penicillin mould colonies forming on the internal surface of an external wall in an underheated wet occupancy with three adults and two children (see Table 3).The most toxic of moulds in aspergillus fumigatus is part of a ubiquitous, saprophytic fungi, invasive aspergillosis, in the immunocompromised patient population, which causes very serious illness with high mortality rates

The first question is: if the residents were not living in that property – and so there was no cooking, washing or bathing – would there still be mould? Is it the result of use and occupation, or is it wholly or partly due to the design of the building or any defects? I am often asked this question when acting as an expert witness in court cases.

We have to take an holistic approach, which will often involve a level four survey – for more information, refer to Diagnosing damp and Michael Parrett’s guide to building pathology film series. These surveys entail invasive procedures, such as calcium carbide testing, using an endoscope to look inside cavity walls, and hygrometers to see whether a solid floor is exuding damp. We are trying to discover whether the building fabric has failed or is experiencing endemic moisture that has nothing to do with the occupiers. Without measurement and monitoring, a surveyor cannot truly define the source and cause of a damp problem.


Any theory about the cause of damp has to be proved, and this often involves long-term monitoring

This holistic approach means the surveyor has to understand design (see Don't be afraid to ask) and defect issues (see Nothing lasts forever), and how these are both related to use and occupation (see One thing leads to another).

When ruling out causes, we should gather important information as we first inspect a property. For example, if visiting in January, when condensation may be related to low outside temperatures, use the opportunity to question residents about their use of heating. Just because the system is on when we visit does not mean that it is always on. How does the tenant use it on a typical winter’s day? 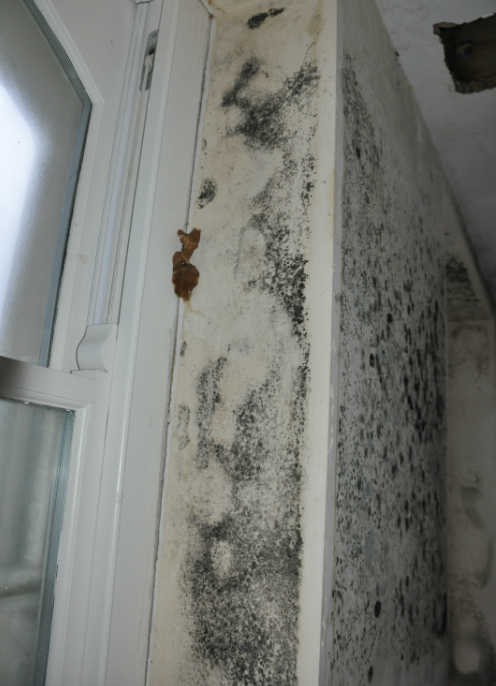 Figure 2: The presence of mould colonies similar to those shown in the image, left, with the addition of the domestic cup fungus (Peziza domiciliana) indicates that there is more than a single cause of the dampness. In this case, use and occupation of the dwelling coupled with rainwater penetration around the ill-fitting window frames results in both mould and fungal growth to the external solid wall overclad with ‘dot and dab’-applied plasterboard dry lining

Take electricity and gas meter readings and use these as a baseline for any subsequent visits. Understanding energy consumption over time can be very revealing about heating use and can be modelled with energy providers – they can tell you how much energy four occupants in a typical two-bedroom ground-floor flat should be using to keep their home warm, for example.

Take some initial environmental measurements, such as internal and external air temperatures, and calculate the amount of moisture in the internal air, expressed as relative humidity. By correlating temperature, relative humidity and vapour pressure, the dew point of the internal air can be calculated. This is critically important because, by measuring internal wall, window and ceiling surface temperatures, we can then determine whether these surfaces are below the dew point. If so, there is a risk of condensation.

Education of surveyors and residents alike is crucial to understanding and minimising condensation. For example, some surveyors maintain that moisture caused by plants, fish tanks and pets in properties is an issue, but unless these are at excessive levels then they are rarely identified as making a significant contribution to condensation.

Measures that can minimise condensation problems include whole-property ventilation systems – as used in Passivhaus properties – and heat-recovery systems. However, some simple preventative measures for residents include:

Identifying use and occupation issues

Any theory about the cause of damp has to be proved, and this can only be done with proper training and thorough measurement, which often involves long-term monitoring. Surveyors must acquire the knowledge that various building types dating from different periods are susceptible to inherent defects, which can cause damp.

Solving condensation problems is often complicated, but always remember that it is not a cause of damp but a consequence of different factors. It is not just down to the heating and ventilation habits of occupiers – it is very often about design, defects and the materials that have been used in construction.

An incorrect diagnosis is easily made, but can have huge consequences for occupiers and for the choice of remediation or improvement to the property. Forming properly considered opinions and recommending appropriate solutions can only be done by understanding the complex links between these issues.

Michael Parrett is a building pathologist, chartered building surveyor and founder of Michael Parrett Associates. He is an Eminent Fellow of RICS and the lead author on the Building Pathology Damp section of isurv

Download a complete “Damp: use and occupation of dwellings” PDF