Is the buy-to-let market dead and buried or ready to thrive? Policy changes seem to be helping some but hindering others

Any landlord or letting agent will be feeling the effects of government policy changes intended to curb buy-to-let (BTL) investment in England. Landlords and agents must adhere to more than 400 rules and regulations, with possible local authority fines of up to £30,000 or even a prison sentence for breaching them.

The additional 3% stamp duty on investment purchases or second homes and the loss of mortgage finance relief are also starting to have an impact on the BTL business model. Ministry of Housing, Communities & Local Government data suggests 3,800 landlords are leaving the sector each month, while the number of BTL mortgages fell from 183,000 in 2007 to around 70,000 in 2018.

So is the BTL model dead? For some, yes – depending on their investment objectives and where they own properties. Those hoping to purchase properties and secure an income will find it tough to make the model work under the harsh new tax regime unless they are letting houses in multiple occupation (HMOs).

But BTL was never a great income generator, particularly at the start of the investment. Originally, the BTL business model was to purchase a property, let it, and hope to make enough money to cover maintenance and refurbishment costs, maybe generating some extra profit. The most significant benefit, however, was that while the tenant covered the ongoing costs, the property’s value increased.

That provided an equity lump sum on sale, which could translate into an excellent return on investment, assuming the purchase was positively geared. This model was then hijacked by people claiming it was better to invest in BTL than keep money in the bank, given a low interest rate as opposed to a return of 5% or more from a rental.

Unfortunately, this general assumption failed to take account of void periods, rent arrears, maintenance and tax. It meant many BTL properties were only providing a low-percentage net income, although their growing value as properties meant they would command a good return on investment once sold.

For those hoping for an early income from their property investment, borrowing with the latest taxation changes is probably going to make this tough, unless they are let as HMOs. This is the case in areas where property prices grew rapidly since the credit crunch but are now falling back or stagnating. Average prices in London, the south, and parts of East Anglia have grown by 58%, 36% and 41% respectively since the previous peak in 2007/08, while poor wage growth has prevented rents rising correspondingly. Despite reports of extortionate rents, the Office for National Statistics’ private rental index in fact shows they typically rise in line with wages rather than property prices.

It’s not all plain sailing for those turning to HMOs either. In some places, this market has become incredibly competitive, with landlords struggling to fill rooms. Besides other concerns, Brexit uncertainty has led to some Europeans leaving the UK because the fall in the pound has affected the value of their wages in their homeland. So all round, new BTL investors probably have a tough task ahead of them.

For investors in UK property as far back as 2000, or until 2014 in areas such as the south, the east and London, capital growth and income returns are probably still strong, even allowing for increases in taxation. Average prices in most areas have risen quite dramatically since 2000, as Table 1 shows. As such, long-term investors could well survive, and even thrive in the future, with predicted growth in tenant demand and dwindling stock levels.

Those hoping to invest for capital growth will not find it easy; longer-term investors will have already experienced good growth, as Table 1 indicates, but this is not forecast to continue. Rightmove puts the average annual capital growth between 2005 and 2018 at 3.7%, Nationwide at 2.6% and the UK Housing Price Index at 3.4%, for example, but Table 2 shows some companies’ forecasts for growth over the next few years. 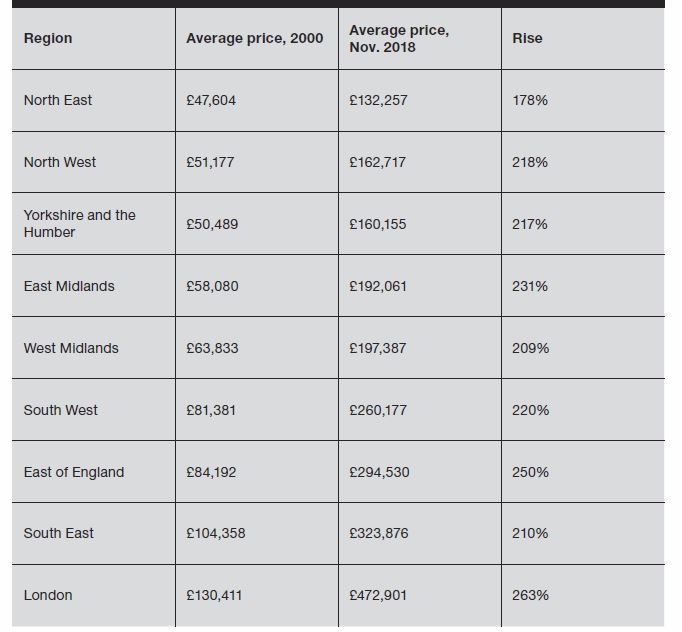 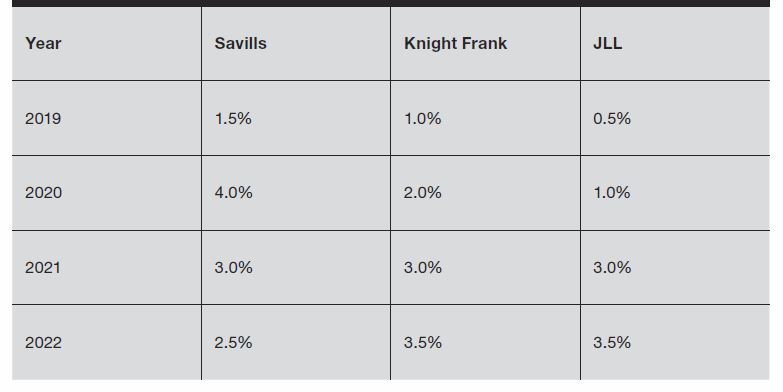 What immediately jumps out from these numbers is that when you add in data from the 1980s, average property prices have risen by 2.6% in excess of inflation, as Figure 1 shows. It’s clear that the trend for long-term growth has already ended and is not forecast to recur. In summary, the BTL model will still work for those who have invested since 2000, from a capital growth and income perspective. However, a postcode lottery and investors’ ability to buy well will have determined whether they have made any returns since 2005. Anyone investing now will have to work hard to make the model succeed. 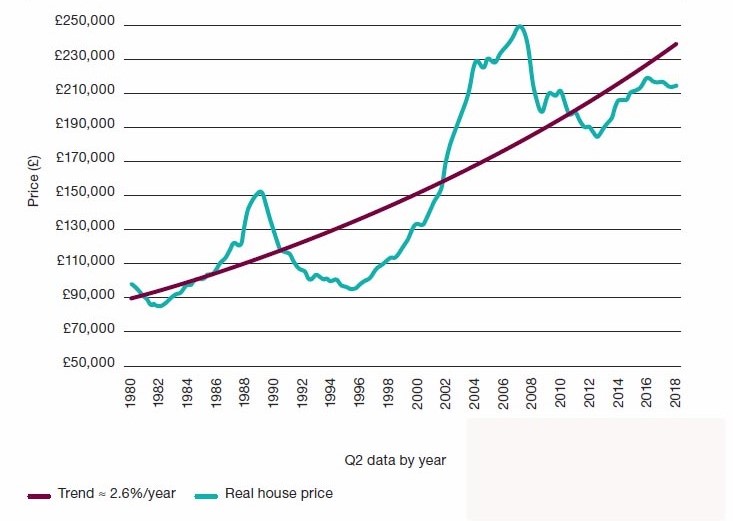 Some people’s response to lower returns is to invest with cash rather than a mortgage, but the main reason that BTL succeeds is gearing: take that away and, in real terms, many cash investors will have been losing money for some time, often without realising. Cash investors in most English regions have on average seen a fall in the value of their asset, bearing in mind that the compound inflation rate from 2007 to 2018 has been 36.29% except in the South East, East of England and London.

Sadly, the government’s policy to reduce BTL returns is primarily affecting tenants rather than landlords, and there has been a rise in homelessness. According to a government briefing, the proportion of homeless people put in that position due to ending an assured shorthold tenancy has risen from 15% in 2010/11 to 27% in 2017/18 in England, and 31% in London, although this is partly due to the growth in households in the private rented sector.

Greedy landlords get the blame for evicting tenants to raise rents, although this is not borne out by statistics. According to the Association of Residential Letting Agents, ‘the number of tenants experiencing rent increases fell for the 4th month running in December [2018], with [only] 18% of agents reporting that landlords increased rents’. The government’s own private rental index states that prices paid by UK tenants in this sector rose by 1% in the year to December 2018, up from 0.9% in the preceding month.

I believe the rise in evictions and homelessness in the private rental sector is due to landlords selling up as a result of tax changes, and no longer letting properties to those on benefits thanks to London housing allowance caps and universal credit, which have together led to rent arrears.

The anti-BTL policies were introduced by the government to reduce competition for first-time buyers, boosting homeownership and encouraging investment from large institutions. Unfortunately, it didn’t realise what would happen to tenants in rented properties being sold to first-time buyers. Effectively it ignored the fact that tenants don’t only rent because they can’t afford to buy; rental demand and the UK population are also increasing. Local authorities cannot now rely on the sector to support those evicted as there are insufficient social homes and private landlords.

Tenants have as much right to a roof over their heads as first-time buyers or second steppers. Taking away properties previously let to tenants who could never afford to buy is making the housing crisis worse rather than helping. Also, continuing with a policy of discouraging individual BTL purchases at the same time as subsidising institutional BTL may improve standards, but it won’t meet growing demand. If just 1% of individual landlords were given incentives to build 1 more home each a year, that could add 20,000 properties to the private rented sector annually, all constructed to a high standard. This could be done quickly by, for instance, taking an underoccupied house and splitting it into 2 flats.

Tenants need quality homes from good landlords at affordable rent. These need to be provided by both social housing and private lettings. Current government policies have been good news for landlords who can make the model work but they are bad news for tenants, especially those who are already vulnerable.

Kate Faulkner is managing director of Designs on Property