To ensure the significance of heritage assets is protected, conservation professionals must get to grips comprehensively with the legislative context in which they work

There is a vast amount of legal information for professionals involved in heritage planning to understand, with definitions, documents and case law providing a solid knowledge base for UK practitioners. One key concept is listed building consent (LBC), which falls within the broader remit of conservation and offers a way to label or identify the social value of heritage assets.

Conservation itself is the process of assessment or approval and is defined by the Historic England (HE) Conservation Principles, Policies and Guidance 2008 as ‘managing change to a significant place in its setting in ways that will best sustain its heritage values, while recognising opportunities to reveal or reinforce those values for present and future generations’.

This is similarly expressed in the UK’s other nations as follows:

In contrast to conservation’s specifics, significance is a term that covers the sum of cultural and natural heritage values; implicitly, a range of values that together enhance the overall status of a place, which may be archaeological, architectural, artistic or historic. A key, established principle is that heritage assets should be managed to sustain this value, and that needs a thorough understanding of significance.

A listed building is one that is for the time being included in a list compiled by or approved by the secretary of state as defined in the relevant legislation:

Listed status will cover the building itself, and any object or structure fixed to the building or in its curtilage that, although not fixed to the building, forms part of the land and has done so since before 1 July 1948, or later if specified in the listing. Listed buildings come under the bracket of designated heritage assets (see Figure 1). An assessment of the degree to which an object or structure is attached or annexed and the purpose behind this is required to determine what is fixed to a building. It is possible for an extension or structure to be listed because it is fixed, but if it is of no special interest its alteration may not require LBC, although its demolition would. 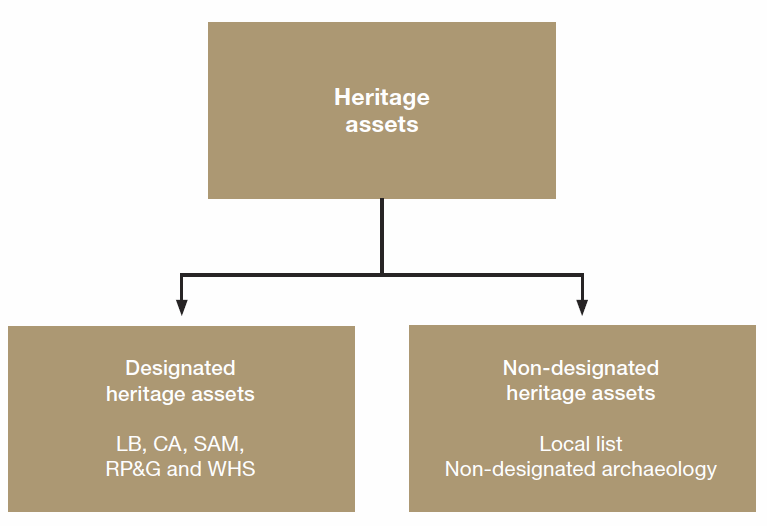 Shimizu UK Limited v Westminster City Council [1997] UKHL 3 clarified the point that if the partial demolition of a listed building is deemed an alteration that affects the character of the building as one of special architectural or historic interest then LBC will be needed. In effect, to claim a matter is simply an alteration so LBC is not required would be the wrong approach.

The extent of a listed building’s curtilage can be notoriously difficult to establish. In heritage cases, curtilages may extend beyond current ownership boundaries to those of the historic estate and its relationships; for example, a farmed landscape once linked to the estate and a part of its wider context and setting could readily be deemed the original and relevant curtilage. Where such cases become complex and intractable, specialist legal advice is often required.

In England, the principal legislation governing the protection of listed buildings is still the 1990 Act. Section 66(1) of this establishes a key duty that ‘In considering whether to grant planning permission for development which affects a listed building or its setting, the local planning authority … shall have special regard to the desirability of preserving the building or its setting or any features of special architectural or historic interest which it possesses’. The equivalent guidance in the other nations is:

Specialist national guidance has furthermore emerged in all jurisdictions as:

In recent years, such policy and guidance has set out a series of presumptions making significance central to the system, defining some heritage assets or elements as critical and some as tradable when balanced against other benefits. These are referred to as the substantial or less than substantial harm tests in the revised 2018 NPPF in England. Welsh TAN 24 guidance states that heritage assets represent a finite resource, and the HES policy statement that listed buildings can be robbed of their special interest by inappropriate alteration or demolition.

While the main duty of preservation is legally mandated, practitioners may become embroiled in complex and sometimes lengthy discussions as to the critical and tradable elements in an LBC application. For example, a project may involve restoration or repair that results in the loss of some historic fabric, understandably exacerbating tensions. An assessment mechanism is therefore required to support LBC applications. This would most appropriately take the form of the following, according to the nation in which it is made:

Consulting the documents in Table 1 is recommended for projects involving heritage appraisal in LBC applications.

The UK system of heritage control is built around the broad philosophy that heritage assets such as listed buildings are retained in optimum viable use or the most appropriate conservation use, and, where change is necessary, this should respect and retain special interest, that is, significance. The lexicon of heritage language constantly evolves as international conventions and national legislation and policy define and refine new ways of approaching this LBC regime. This LBC is itself a separate consent from planning permission, and may be required in addition to it, or by itself for works such as internal alterations that do not themselves require permission.

Importantly, the planning law concept of development does not apply to LBC, so that works for the maintenance, improvement or other alteration of a building that only affect the interior – which ordinarily do not require planning permission – may require LBC. LBC is always required if works affect the character of a building of special interest, but this is a matter of judgment. As a result there is scope for differences of opinion between different local planning authorities and listed building owners.

To list a building is to identify it as important and to attribute to it a value or worth. These values are themselves based on judgments and the current interpretation of what is appropriate restoration, conservation and repair: note that conservation is a process, while restoration and repair are methodologies or end states. Although some policies across the UK diverge, it is commonly agreed that any decision to demolish, alter or extend a heritage asset must be assessed against the implications for its special interest.