Questions about fire detection and alarms for buildings persist despite BSI’s revised standard for systems. Simon Sandland-Taylor offers some clarification

These range from systems consisting of just 1 or 2 manual call points (MCPs) and sounders to those that are complex and networked and which incorporate a large number of automatic fire detectors, MCPs and sounders, connected to numerous intercommunicating control and indicating panels.

The term also includes systems that initiate the operation of other fire protection equipment, such as extinguishers, automatic ventilators and automatic door releases.

The fact that BS 5839–1 does not cover domestic premises has been questioned, but this 1st part of the standard was never intended for application to domestic premises, which are covered by BS 5839–6: 2013 instead. Nevertheless, many designers and installers continue to ask the question.

In order to address this, when part 1 of the standard was updated in 2013, the title was amended to Fire detection and fire alarm systems for buildings – Part 1: Code of Practice for design, installation, commissioning and maintenance of systems in non-domestic premises. Despite this addition to the title of both the 2013 and 2017 standard, which specifically excludes domestic premises, the question is still raised.

An appropriate life protection system will satisfy the functional requirement of Building Regulation B1, Means of warning and escape. Such systems help to provide early warning of fire and can therefore afford occupants more time for escaping before conditions might become untenable.

Property protection systems, meanwhile, are required for a number of different reasons, including the need for business continuity, insurers’ requirements, and safeguarding the fabric of listed and heritage buildings.

It is thus essential any fire detection and alarm system designed for a building satisfies all the fire safety objectives, supporting the overall fire strategy and not being considered in isolation.

As category L and P systems are designed to satisfy 2 different and distinct objectives, their design, installation and performance are quite different. Attempting to compare, for example, a category L1 system with a category P1 would like to comparing apples with pears, neither being an appropriate alternative to the other.

A fire strategy could in certain situations require provisions for the protection of both life and property. In such cases, a mixture of category L and P systems would be incorporated, being referred to as L1/P1, L2/P1, L2/P2, L3/P1, L3/P2 and so on, according to the subdivisions detailed below.

Category L systems are subdivided into category L1, L2, L3, L4 and L5 depending on the parts of the property that they cover (see Figure 1). Category L1 systems, shown in the area ringed in blue, are installed through all areas of the building. They offer the highest standard of life safety because they provide the earliest possible detection of fire, and therefore the longest possible time in which to escape. 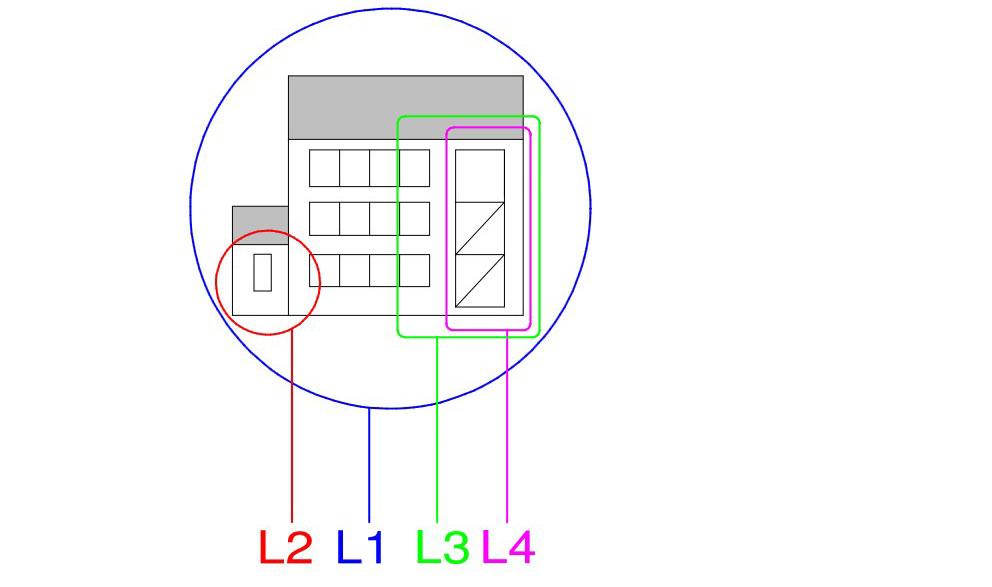 Before explaining the features of category L2 and L3 systems it is first necessary to consider category L4. Included in the area ringed in magenta, such systems are installed in those parts of the escape routes comprising circulation areas and spaces, such as corridors and stairways.

Category L3 systems, ringed in green, are in turn designed to warn of fire at an early stage to enable all occupants, other than those in the room where the fire originates, to exit safely before the escape routes are impassable owing to the presence of flames, smoke or toxic gases. To achieve this objective, detectors are normally installed in rooms that open onto an escape route.

Category L2 systems are installed according to the same principles as those for an L3, with the additional objective of providing early warning of fire in specified areas – which are ringed in red in Figure 1 – where fire hazard, fire risk or both are at their highest.

Category L5 systems provide automatic detection to satisfy specific fire safety objectives other than those of category L1, L2, L3 or L4 systems. Protection might be provided as a compensatory feature to justify a departure from the normal guidance, as part of a fire-engineered solution, or as part of the operating system for fire protection equipment.

The simplest form of electrical fire detection and alarm system for life protection is provided by a category M system. Unlike category L systems, these do not incorporate automatic fire detectors, but rely solely on manual activation to raise the alarm, hence category ‘M’. Such systems are used in relatively simple buildings where occupants will not need to be woken from sleep to effect an exit. All category L1, L2, L3 and L4 systems should incorporate the features of a category M system as a minimum standard.

Category P systems are subdivided into P1 and P2 in turn (see Figure 2). Category P1 systems are installed through all areas of the building, thereby providing the earliest possible warning of fire so as to minimise the time between ignition and the arrival of firefighters. 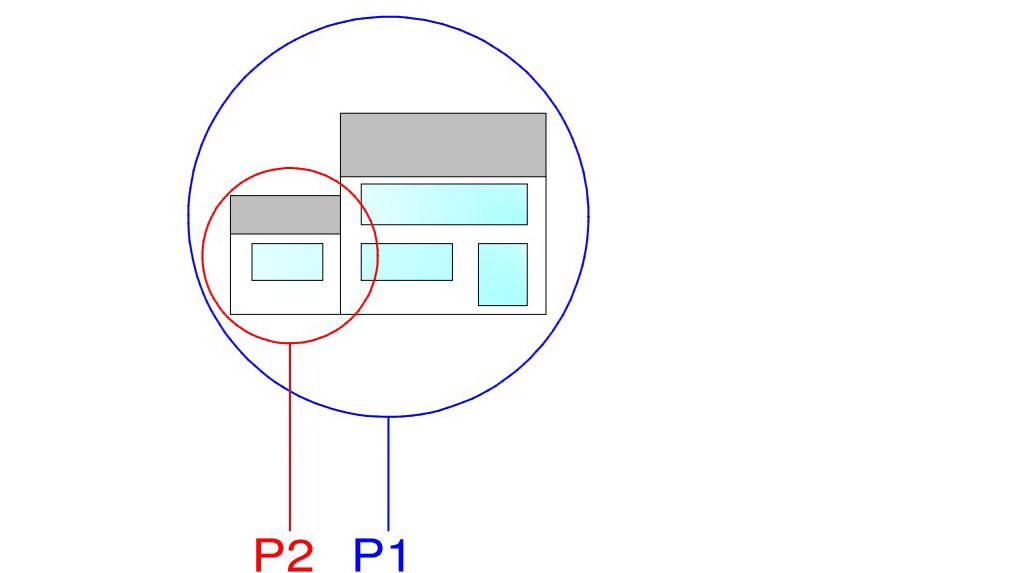 Category P2 systems on the other hand are installed only in areas of high fire hazard or where the risk to property or business continuity is high, to provide early warning of fire. The parts of the building so defined might be as few as 1 or 2 rooms or may amount to an entire floor.

Where the fire strategy requires the provision of a category M in conjunction with a category P1, P2 or L5 system, the resultant combination should be described as a category P1/M, P2/M or L5/M system respectively.

A common question posed by designers and installers is that, when considering a Building Regulations submission for compliance with requirement B1, is it acceptable for the agent or designer to include a standard note stating ‘Fire detection and fire alarm system to be designed, installed, commissioned and certified in accordance with BS 5389–1: 2017’?

At first glance, this would appear to be fine, as it refers to the necessity for certifying the design, installation and system commissioning as recommended in the standard.

However, such a note is in fact completely meaningless as there is no reference to the actual category of system to be used in the standard. Because a BS 5839–1 life protection system could be any 1 of the 6 systems to which clause 5 refers, it would be prudent for the building control body to seek clarification.

There would also be a need to verify the areas where detection is to be provided should a category L2, L3, L4 or L5 system be specified.

The acceptance or approval of an incomplete note could also result in confusion, and the wrong system may then be installed on site. For example, a contractor following the suggested note could install, commission and certify a BS 5839–1-compliant system to a category M standard, completely unaware that a category L system is needed to satisfy functional requirement B1.

The rationale for MCPs to be located at exits on all storeys, whether or not these are specifically designed as fire exits, has also been queried. This particular recommendation was introduced in the previous version of BS 5839–1 in 2013.

It had always been the norm to provide MCPs on escape routes and at all dedicated fire exits. When drafting the 2013 standard, it was recognised that a building occupant might on discovering a fire choose to escape via a familiar, non-dedicated exit.

In such a situation, it would therefore be possible for someone to escape without having the opportunity to raise the alarm if they did not pass an MCP on their exit route from the building. To prevent such situations arising, it was decided to require the provision of MCPs at all exits from buildings.

Subsequent to the introduction of this recommendation, it was observed that MCPs were being provided at all exit doors, even if they did not lead to a place of safety. This led to instances where occupants unfamiliar with a building layout could on seeing a call point adjacent to an exit door try to escape via the door only to discover it did not lead to a place of ultimate safety. They would also have to re-enter the building to find a dedicated fire exit, having lost vital escape time in the process.

To overcome this problem, clause 20.2(a) of the new standard was amended to read: ‘MCPs should be located on escape routes and in particular at all storey exits and all exits to open air that lead to an ultimate place of safety (whether or not the exits are specifically designated as fire exits)’.