An alternative to fracking?

The upsurge in US oil and gas production due to advances in horizontal drilling and hydraulic fracturing ('fracking') technology has been watched carefully in many other parts of the world. But governments have also taken note of the significant environmental concerns associated with the procedure.

There are 3 major issues: the amounts of water used, the potential for groundwater contamination from chemicals, and the earthquake potential from deep well injection disposal of fracking flowback water. As a result, many countries such as Bulgaria, France, Germany, Ireland, South Africa and the UK have imposed temporary moratoria, or in some cases permanent bans, on fracking while the environmental and economic issues are studied.

As an oil or gas well is drilled, the drill bit passes through various formations and encounters water, oil and gas that have been compressed over past geological eras. To keep these pressurised fluids from escaping onto the surface as the well is drilled, and to separate the targeted oil and gas from groundwater, drillers circulate mud to create a hydrostatic weight that exceeds the pressures in the formations.

This method is referred to as 'overbalanced drilling'. With over-pressurisation of the casing, and therefore the borehole, and use of cement to seal the space between the rock strata and the metal casing, pressure on the bottom of the well while drilling will always be higher than the pressure in the formation. This serves primarily as a well-control mechanism to prevent dangerous blow-outs. The trade-off for controlling pressures in the hole with mud, however, is damage to the reservoir’s permeability which prevents oil and oil gas from being produced naturally without fracking.

Once the well is drilled horizontally into a shale formation and production casing and isolation packers have been installed, fracking begins. A mixture of sand, millions of gallons of water and/or other fluids, and chemicals are pumped at high pressure down the well and through holes – perforations – in the casing, created either by the use of perforated pipe or by setting off charges to blast holes in the horizontal pipe at regular intervals.The pressurised mixture opens up naturally occurring cracks, and this fracturing releases oil and gas into the well bore. Then the pressure in the well is reduced and the fracking fluids are sent to the surface, allowing oil and/or natural gas to escape through the well bore to the surface, where it is collected and transported from the well site.

Figure 1 shows a typical horizontal drilling and fracking operation in a poor-quality reservoir previously bypassed when drilling for conventional reservoirs, that is, formations with good pororisty and permeability. 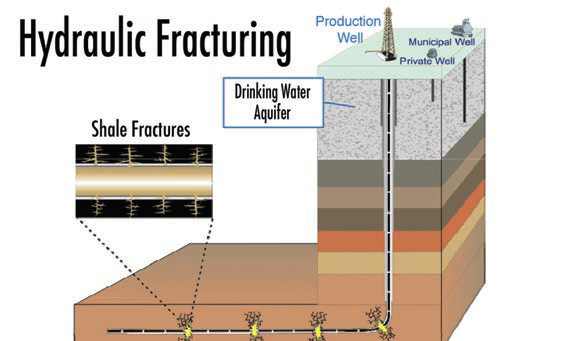 By contrast, underbalanced horizontal drilling (UBHD) does not need steel casing and cement to separate the resource formation from the borehole. Instead, as drilling proceeds in the horizontal section without circulating drilling mud, the resource enters the under-pressurised borehole and rises to the surface.

As a result, there is no need to install casing or blast perforations or insert isolation packers or sliding sleeves, nor any need to use a pressurised mixture of water, chemicals, acids and sand to fracture the shale formation and stimulate the flow of the resource into the borehole.

The naturally occurring micro-fractures in the shale allow gas and oil to escape into the open uncased borehole without artificial stimulation because the micro-fractures have not been plugged up with drilling mud. UBHD uses a mixture of mineral oil and nitrogen gas to keep the hydrostatic pressure of the drilling medium below the pressure in the formation being drilled.

The result is that fracking is no longer necessary to recover the resource, and the serious environmental concerns associated are eliminated. None of the chemicals involved in fracking are used, nor is sand necessary to prop open the micro-fractures.

The UBHD process protects the natural permeability of the micro-fractures in the shale. Mineral oil, which is non-toxic, biodegradable and recyclable, is used in place of drilling mud, and no water is used. In UBHD, 100% of the drilling fluid is recovered, compared to only 30% of the fluids used in hydraulic fracturing.

Because UBHD does not use any water, it eliminates the need for deep-well injection of fracking wastewater, and since it does not use high pressure, it also minimises the risk of earthquakes as a result of drilling near faultlines.

The elimination of the need for fracking saves significantly on the overall cost of the entire drilling and production process. In the Eagle Ford formation in South Texas, wells drilled and completed using UBHD technology have cost between $3m and $4m (£2.1m–£2.8m) compared to costs of $6m–$8.5m (£4.2m–£6m) for wells in the same formation using overbalanced drilling plus fracking. Recent business plans for UBHD forecast typical cost savings of 40%, with even greater savings in future due to wider use and commercialisation.

So why has the oil and gas industry continued to embrace overbalanced drilling plus fracking as the preferred technology? Tradition, training and vested interests.

In the early years of oil and gas exploration, blowouts were a significant safety risk. A spark could ignite an explosion or raging inferno. By the mid-1920s, rotary drilling techniques combined with a blowout preventer (BOP) began to control the pressure in the rock formations. Since then petroleum engineers have been trained primarily in overbalanced drilling techniques.

However, change is risky and retraining costly. Although a few US producers, most notably Shell and some smaller operators, have begun to see the benefits of UBHD technology, it has been supported in just a few countries, such as Oman, and on a very limited basis in Colombia.

At least 7 steps are needed to get underbalanced drilling more widely recognised internationally.

Richard J Roddewig FRICS is President of land use and real estate consulting firm Clarion Associates, Inc.
W James Hughes is a professional geologist with more than 30 years’ experience. He holds 18 US patents related to UBHD