Quincey and Jonathan Carrivick report on how glacial lake outbursts can be modelled in unprecedented detail, offering lessons for flood prevention

The largest floods ever to have occurred on Earth are known to have been outbursts from glacial lakes, and they continue to threaten many towns and villages downstream of ice-sheet margins and mountain glacier termini. Outburst floods are increasing in both frequency and magnitude, but modellers and flood prevention engineers trying to predict inundation levels now have a new tool at their disposal.

Structure from Motion (SfM) provides hyperscale landscape models with unlimited temporal frequency and centimetric point density and accuracy, offering unprecedented detail with which to model flood events. The models are based on images acquired by nothing more than a standard compact camera. 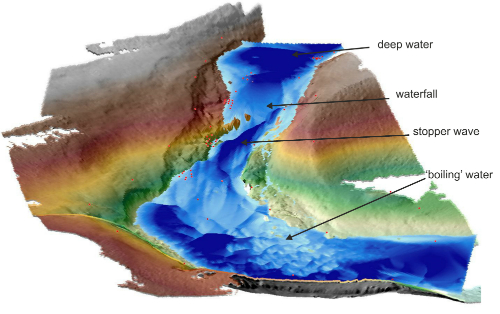 Figure 1: Model of a gorge

In western Greenland, outburst floods or jökulhlaups are a relatively common phenomenon. Some ice-dammed lakes that abut the margin of the Greenland ice-sheet drain periodically, following a cycle that is characterised by between five and 10 years of discrete drainage events and subsequently long periods – in excess of a decade – of lake refilling. One such lake near the town of Kangerlussuaq, or in Danish Sondre Stromfjord, recently started a jökulhlaup cycle after a 20-year period of inactivity. Tourist roads, major bridges and even a 20-tonne mechanical excavator have all fallen victim to this latest round of sudden and unpredicted floods.

Despite the clear impact that these high-magnitude events have on people, property and infrastructure, models of flood progress and extent are often constrained by relatively coarse terrain data. Part of the problem is the inaccessibility of the terrain and the need to make repeated surveys so as to update changes in channel shape from erosion and sedimentation.

These kinds of survey depend on traditional procedures that are both time-consuming and expensive to carry out. Remote and automated approaches for acquiring reliable topographic data can therefore prove particularly valuable in such terrain.

Most people are already familiar with airborne and terrestrial laser scanning and the quality of earth surface elevation data that these approaches can supply. But the cost of the technology is restrictive for most research projects, with short-term rental charges running into thousands of pounds even before data processing has begun.

SfM is an image-based method that has come to prominence in geoscientific applications over the last five years, being low in cost, flexible in terms of data acquisition requirements and easy to run through post-processing. The accuracy and density of the resulting digital elevation data are also routinely comparable with those acquired by terrestrial laser scanners.

The application uses images acquired from multiple viewpoints to determine the three-dimensional geometry of a surface, a method that diverges significantly from traditional photogrammetry in two main ways. First, it uses a new generation of image-matching algorithms that allow for unstructured image acquisition – indeed, SfM typically uses hundreds of images to model a terrain surface rather than just several, as in traditional photogrammetry. 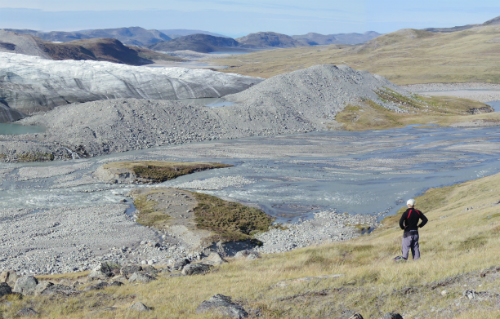 Second, ground control points (GCPs), which are used to scale and orientate the resulting point-cloud data, are introduced as one of the final steps in the photogrammetric process rather than one of the first. This means the final quality of the digital elevation model relies less on the quality and distribution of those GCPs and this can be beneficial in areas that are hard to access with a differential GPS.

The SfM processing chain varies slightly between software, but commonly follows several main steps. First, homologous ‘keypoints’ are matched between photographs, so that the basic scene geometry can be constructed.

Second, those keypoints are refined by excluding those that do not conform to a perfect geometric model, then assessing the proximity and relation of the remainder to neighbouring ones. Camera orientations and geometries and 3D object point coordinates are adjusted iteratively to provide a coarse point cloud.

Third, three-dimensional coordinates are calculated for all pixels in the images used in the scene reconstruction, yielding a dense point cloud that comprises one to two orders of magnitude more points than the coarse cloud. Finally, the 3D model is georeferenced and filtered.

Perhaps the most challenging part of the whole workflow is to capture the appropriate images in the first instance. Many users fall into the trap of acquiring a large number of images from a handful of places rather than taking single shots at many different locations. Indeed, the algorithm requires the camera’s ‘motion’ so as to resolve the terrain geometry. This can be quite challenging in remote terrain or areas of extreme topography.

The flood route in Greenland definitely falls into this category. The bedrock gorges through which the waters flow are deeply incised, and the initial channel even flows under the ice sheet for several hundred metres. Capturing images for SfM in such areas requires remote access, so researchers often use drones or fixed-wing aircraft. Several hundred images later and with a bit of computational wizardry, a full digital elevation model of the flood route can be derived, with a pixel spacing of tens of centimetres and an accuracy comparable to data from a terrestrial laser scanner or by traditional stereo photogrammetry. 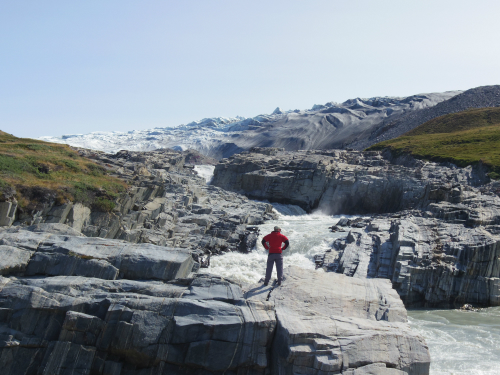 With the new digital elevation model (DEM), extreme flows down bedrock gorges that were poorly resolved in the existing topographic data for the flood route can now be simulated. For instance, a bedrock gorge that was represented by 350 pixels in the original DEM is now represented by more than 570,000 data points in the new model. Such detail lets researchers identify individual boulder clusters and even detect relatively subtle hydrological scour features on a scale of centimetres or decimetres.

The model used to simulate floods in western Greenland is open-source, 2D, and can fully describe the motion of water. It can also incorporate sediment transport and changing bed morphology, which many models are not sufficiently sophisticated to do. Assumptions must be made about the bed topography of the channel because SfM cannot resolve surfaces underwater, particularly if the water is turbulent and the bed is not visible. Yet the resulting photorealistic point clouds generated by the SfM workflow and the hydraulic modelling are powerful aids to understanding and communicating the phenomena.

It is easy, for example, to visualise how rapid transitions in flow regime can occur, from deep flow to flows drawn down over a lip to form a near-vertical thin sheet or waterfall. It is equally obvious how a plunge pool and a stopper wave may exist beneath a waterfall, with these represented in the model as discrete zones of super-elevated and deep water. As the flood progresses into flatter areas and loses velocity, the water begins to ‘bubble up’ due to intense upwelling and recirculation, represented in the model bya rough surface and shallow water.

The ability to model extreme flows in such fine detail is beneficial for several reasons. First, it enables the prediction of areas of inundation with much greater confidence and thus more effective preparation for flooding. The Greenland project demonstrated the benefits of using the finer resolution grid on a relatively sparsely populated section of the jökulhlaup route, but its true benefit could be realised in simulating extreme flows through the more densely populated town of Kangerlussuaq. 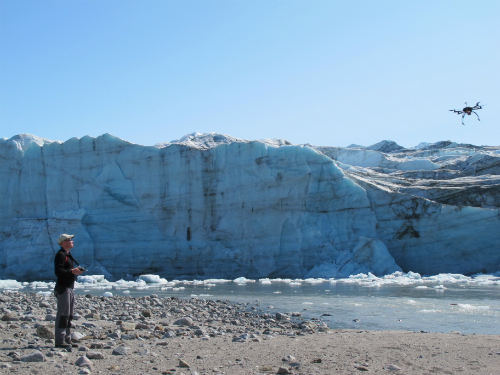 Figure 4: Drones are needed to capture images for SfM

Here, the key stakeholders who could benefit include the municipality officials responsible for the town’s infrastructure and water supply, local tourism operators and the airport authorities, because the runway – the gateway to western Greenland – is bordered by the Watson River. Of course, taking this same approach to modelling outburst floods in more populated areas of the world, such as the foothills of the Himalaya, could improve predictions and preparedness for disasters still more markedly.

Second, given the extra detail afforded by the SfM data, the ability to include sediment transfer processes in fluvial modelling is made possible. Previous models have neglected or oversimplified sediment transport and thus failed to offer accurate representations of reality. Critically, channel geometry changes as a result of sediment transport have been shown to be both intense and rapid, making their inclusion in future numerical simulations a clear challenge for the modelling community.

Finally, by repeating measurements on an annual basis, it becomes possible to make the quantitative assessments of erosion and deposition rates that are required for models of landscape evolution. Indeed, there are virtually no quantitative data for the geomorphic effect of regular meltwater-fed flows as compared with extreme flood events. For the cost of a camera, two flights, a tent and a pile of drone batteries, the derivation of such fine-resolution data becomes much more feasible.