Few would argue that outstanding leaders are needed to deliver major projects successfully. As projects become bigger, leaders must be capable of managing complex temporary organisations, which often mirror complex businesses. This requires a diverse range of experiences and competencies; as a result, there are not many people who have the pedigree to be entrusted with driving often colossal undertakings towards success.

The leader affects many elements of a major project, and vice versa. This article will identify these factors and discuss how to develop leaders who are capable of handling these challenges.

Competencies that make the difference

There are three core competencies that successful project leaders should exhibit and exemplify for other team members. Without these, there is less chance of collaboration and the collective energies, expertise and knowledge of the team can be squandered. Besides technical abilities and experience, these competencies make the difference. They rely strongly on business acumen, interpersonal skills and organisational intelligence.

I’m often asked that if I could recommend only one thing to secure more success in major projects, what would it be? My answer is to hire a project leader who has done it before, that is, who has a documented track record of being able to deliver major projects successfully. At Oxford we call such leaders Master Builders.

Developing these competencies, as distinct from the more technical skills such as planning, requires more than simply imparting knowledge.

The complexity and multiple expectations of the leader’s role on major projects can be captured in a model. The idea is that a leader must look in eight directions to identify and understand the whole picture: upwards, outwards, internally, externally, backwards, forwards, inwards and downwards.

These directions can be paired because they focus primarily on stakeholders, vision, keeping on the ball and focusing on results (see Table 1). Where does your focus lie, and is it appropriate for the context in which you are delivering?

Table 1: The Eight Lookings: where a project leader must look to understand the full context of a major project

I have used the Eight Lookings in different ways; for instance, to check how well project leaders’ focus is aligned (or not) with that of the project sponsor, and to help project teams in trying to understand whether their collective focus was creating blind spots. The Eight Lookings can also be used to assist leaders or teams where things are going well but they want to improve their performance further.

To have meaningful conversations with organisations, I developed a project culture matrix (see Figure 1). This identifies the type of project leader and the leadership style that will thrive in an organisation’s culture, distinguished by the level of centralisation and collaboration. It applies to the organisation for which the leader works or their client. It has led to interesting observations, such as: 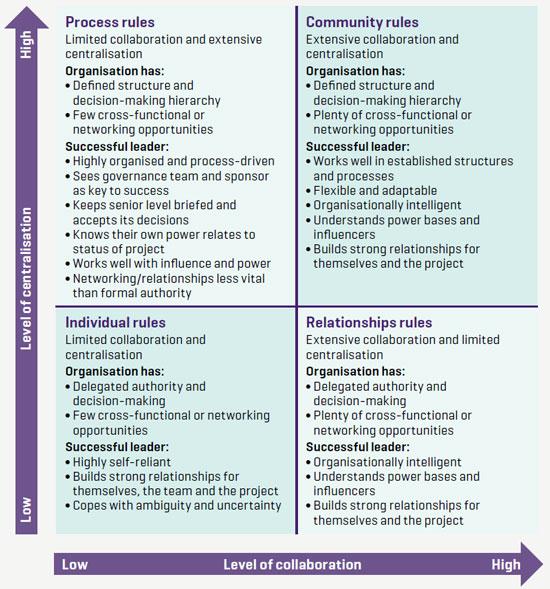 Figure 1: Project Culture Matrix: identifying the type of project leader and style of leadership that thrives in an organisation's culture

A major project goes through multiple stages over time, and its leadership needs can also change. Initially, it requires someone who can take an idea and shape a project. Then project approval requires a shrewd political and business-orientated leader.

The early stages of implementation mean bringing together an even larger, disparate team to collaborate on design and procurement. Implementation itself entails a move into performance and then operation. As the project progresses, maintaining momentum and keeping on track become more important.

Eventually, the focus shifts to project closure, ensuring business readiness and handing over to the client. At this point, it often moves from being a project to an operating asset, but a leader is still required to ensure that its overall benefits are delivered.

Individuals have different experiences, skillsets and motivations; what is boring to someone at the early stages of a project may excite another person. These personal drivers and project needs have clearly prompted leadership changes on major projects such as the Channel Tunnel, Heathrow Airport’s Terminal 5 and Crossrail.

It is often assumed that anointing an individual with the title “project leader” automatically confers on them the ability to fulfil that role. Clearly, the reality might be different, so consideration is needed of how to develop that ability and the many other issues affecting the leader’s chance of success.

I agree with leadership experts Kouzes and Posner, who said that “leadership is a set of skills and abilities”. They found that leaders who devote more time and energy to learning then perform better than those who do not. They said there are many ways to learn to be more able, but the most important was to learn more often. Their data was also clear that learning comes before leading. Project leaders should ask themselves “Am I devoting sufficient time and energy to learning to get better at leading?” and “Am I making use of all the opportunities offered to me?”

At CH2M, the outstanding project leaders all exhibit three characteristics: they exemplify the firm’s values, they instil loyalty and courage into our team and they develop trusting but challenging relationships with the client. It’s being able to do all of these things every day that makes them what they are.

Ultimately, organisations use leadership development programmes to improve the capabilities they require of their leaders. An ideal programme should map the multiple elements involved, and intersperse experiential learning modules with local implementation groups and community investment, sharing and collaboration. Support should come through mentoring and coaching, with different things done by different people.

Eventually, this must be aligned with project execution, where the leader is able to apply their learning, the project is helping them to develop and the project itself is benefitting. It is critical that success criteria for an effective development programme are identified and suitable resources allocated, so it is no different from any other project.

Sadly, leadership development nearly always concentrates on training – it is easy to buy and makes senior management feel as though they have taken positive action. Yet in many cases it is impotent and may even be worthless.

McKinsey & Company highlighted the importance of taking a broader perspective in its report The construction productivity imperative – How to build megaprojects better, in which it proposed 15 practices to help improve productivity.

It said: “One way to devise and institute these capabilities on a company-wide scale is to set up an in-house project management academy, as a number of companies with large project portfolios are doing. Good project managers are a rare breed. It is no easy task to manage the contractors, engineers, lawyers, procurement specialists, and public relations experts any big project needs. The best approach is to combine structured training, including certification in specific modules, with on-the-job coaching, so that people can apply the skills they learn.”

Academies acting as a hub for individual and collective development are an increasingly popular approach. In collaboration with Aspire Europe, I developed the Academy Framework. This has three primary and five support elements; the typical organisational functions responsible for each element highlight the need for a concerted approach to ensure success.

As a major projects director, with experience in the infrastructure and technology sectors, I believe the skills critical to success are three-fold: the ability to drive decision-making in the ‘fog’ of project complexity; high emotional intelligence and cognitive aptitude; and to have fun. If any are missing, it is time to call a taxi!

Each organisation is unique and has different needs, but the elements that need consideration and investment when developing capability are broadly the same. The Career, Competence and Development elements of the framework are the building blocks of any academy and are typically what are developed first. I have found that organisations gain value from training, a key part of the Development element, provided they support professionals by investing in the other elements at the same time, as described earlier.

Organisations such as Shell, Amec and NASA invest in academies for a variety of reasons, including providing a brand for organisational development efforts and hoping for synergies from disparate initiatives. Driving the development of a particular capability (for instance “programmification”, where an academy offers a mechanism to introduce the new ways of working) is becoming increasingly common as organisations are more involved in programmes or major projects.

So what of the future for the major project leader? Competent and experienced project leaders who can demonstrate their success will become even more sought-after and scarce. The following list came from my research and from Simon Pratt, a leading executive search expert at Grosvenor Clive & Stokes. He is often charged with finding these elusive major construction project leaders who have to move:

Demand for those with leadership capabilities and potential will grow. As an existing or prospective project leader, you should ask yourself the key questions of whether you are you well placed to benefit from the opportunities presented, and how you can maximise your chancesof being the inspiration for a future major project case study.