In a recent planning appeal decision, policy compliance on affordable housing delivery proved to be a central issue. Against a local authority’s strategic target for 50% affordable housing, the Planning Inspectorate determined 14% as complying with policy. It also accepted that the price paid for the site could be taken into account when assessing site value.

The site was bought following a public tender exercise by the MoD, attracting 26 bids. The final planning submission proposed 112 dwellings, but the application was refused by the London Borough of Islington on 3 grounds, including inadequate affordable housing provision. The key decision for the inspector was 'whether the proposal complied with policy objectives relating to the provision of affordable housing'.

At the outset, the inspector recognised that there was a 'substantial unmet need for affordable housing both in London and in Islington', but added that 'while 50% is the strategic target, any level below this could be in accordance with the plan, providing it is shown to be the maximum reasonable amount'.

Paraphrasing the National Planning Policy Framework (NPPF), he said that

'to ensure viability the costs of any requirements likely to be applied to development, such as affordable housing … should, when taking account of the normal cost of development and mitigation, provide competitive returns to a willing landowner and willing developer'.

Referring to the national Planning Practice Guidance (PPG), he continued: 'where the viability of a development is in question, local planning authorities should look to be flexible in applying policy requirements wherever possible'.

Table 1 shows the various valuation figures submitted by the parties, ranging from the notional existing use value of £750,000 to the winning tender of £13.25m. The question was which of these figures should be the relevant land value benchmark for assessing viability, and therefore for the level of affordable housing necessary to comply with policy. 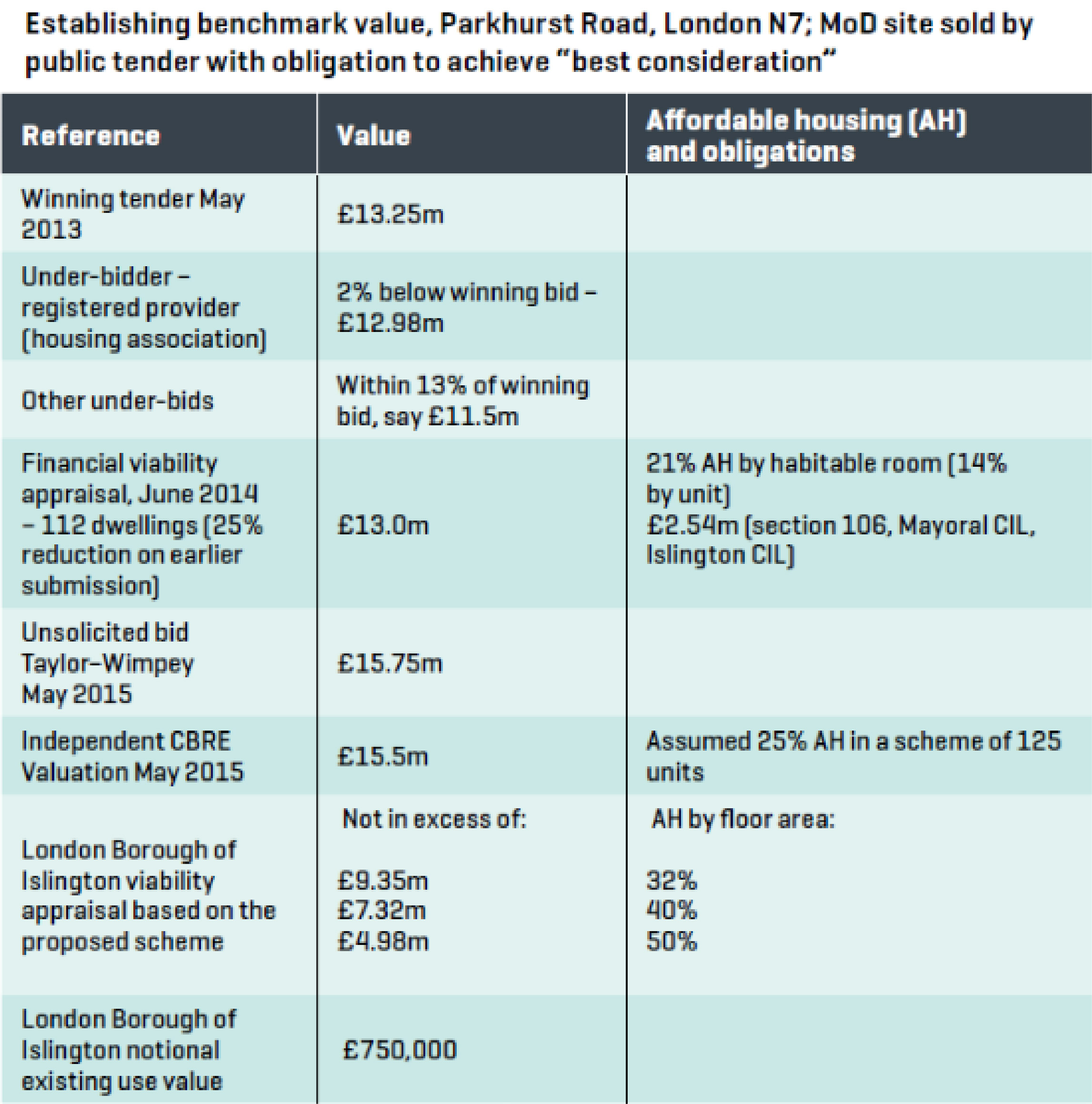 The appellant argued that the site value of £13.26m – in accordance with RICS guidance – was the relevant land value figure to be entered into the development viability appraisal as a fixed acquisition cost. The council disagreed, arguing that the site value adopted and also price paid, was an overpayment that did not fully factor in the need for 50% affordable housing.

The local authority carried out a number of residual valuation calculations based on the proposed scheme at different levels of affordable housing of 50%, 40% and 32%. The calculations gave a residual land value of £4.98m, £7.32m and £9.35m respectively.

Critically, the inspector said that the council had not put forward any market-based evidence of the kind that the PPG indicates is important. In contrast, the appellant had the following evidence to support the £13.26m figure.

First, the MoD was bound by a statutory requirement to obtain the 'best consideration'. The under-bid was only 2% lower and was made by a registered provider. It was not contested that such a purchaser could be assumed to have reasonable knowledge of the local market and be unwilling to overpay for the land. A number of bids were received within 13% of the winning bid, suggesting that the winner was not out of line.

Second, the site was the subject of an unsolicited and unconditional offer of £15.75m in May 2015 by one of the unsuccessful bidders, a major housebuilder. Third, the site was independently valued the same month at a figure of £15.5m.

Finally, the appellant carried out an assessment of comparable evidence based on 21 larger residential development land sales in Islington since 2010. These placed the price paid for the appeal site at the lower end of the range.

A subset of seven sites, mainly those without planning permission at the time of the transaction, generated a comparable range in value for the appeal site of £12.98m–£16.44m. One of the comparables was located in the neighbouring borough of Camden, which has similar affordable housing policies: a 0.27ha site sold by the local authority in 2014 for £11.2m. This was granted planning permission by Camden, based on a proposal offering 22% affordable housing against a policy target of 50%. The borough was also bound by 'best consideration' requirements.

The inspector commented that the appellant’s evidence showed that the price paid for the site was not significantly above the market norm. There was no counter-evidence. The council pointed to the PPG’s statement that land or site value should reflect policy requirements as well as planning obligations and CIL. The inspector regarded this as consistent with the special assumption approach of the RICS Financial Viability in Planning guidance note in defining site value, which should equate to market value but have 'regard to development plan policies and all other material planning considerations and disregard that which is contrary to the development plan'.

Development plans are full of broad statements of policy, many of which may be mutually irreconcilable

It was argued by the council that the appellant’s evidence did not assess the extent to which these sites took account of affordable housing policy and therefore may be importing the constraints of other sites inappropriately into the assessment of the appeal site.

The inspector recognised that, in recent decisions in Islington, around 25% affordable housing was typical but with a wide variance. The council expressed concern about the possible effect of using purchase prices based on a downgrading of policy expectation for affordable housing as this would perpetuate under-delivery. The appellant stressed that their comparable sites had been acquired at risk prior to seeking planning permission.

The inspector emphasised the need to take account of market signals, and concluded that the only information on these supported the use of the appellant’s land value figure. He concluded that the evidence did not suggest that a reasonable landowner would have an incentive to release the land for development at the value suggested by the council.

The inspector found that the appellant’s land value figure of £13.26m reflected policy requirements to achieve the maximum reasonable rather than the maximum possible amount of affordable housing. He did conclude that the delivery of 14% affordable housing would comply with policy, but also provided for a pre-implementation review mechanism.

The inspector, however, dismissed the appeal on amenity and other environmental grounds.

Islington started proceedings for a judicial review of the appeal decision. In its 'letter before claim', it argued that the decision would have 'significant implications for affordable housing provision within London and beyond'. It was concerned that the appellant would rely on the inspector’s reasoning in a re-submission. It could also be used by other developers to justify affordable housing levels well below the 50% strategic target, drawing on land transactions that do not reflect development plan policies.

It argued that the inspector addressed the wrong issue by seeking to establish whether the price was sufficiently above the market norm to be an overpayment, when he should have been identifying whether the land value had 'reflected policy requirements', particularly on a relatively unencumbered site.

Specifically, the council asserted that the inspector:

The government’s legal department rejected a judicial review. It said the council was not a 'person aggrieved' because the inspector had dismissed the appeal on other grounds. This would result in a hypothetical case being presented that the High Court would not entertain. The case did not meet the 'exceptional circumstances' test necessary for special treatment; besides, there were many other avenues open to the planning authority in taking decisions on future proposals. The council discontinued the judicial review.

The government’s response also addressed the issue of 'reflecting policy requirements' but chose not to go beyond the content of the PPG. It said the Secretary of State had given such guidance as he considers appropriate in his PPG, which states, among other things, that land value should 'in all cases … reflect policy requirements'. It added that any necessary working out of its consequences should proceed on a case-by-case basis.

The government response also referred to a leading case where a judge stated that, in principle, interpretation of planning policy is a question of law. He did point out, though, that policy statements should not be construed as if they were statutory or contractual provisions.

'Although a development plan has a legal status and legal effects, it is not analogous in its nature or purpose to a statute or a contract … Development plans are full of broad statements of policy, many of which may be mutually irreconcilable, so that in a particular case one must give way to another. In addition, many of the provisions of development plans are framed in language whose application to a given set of facts requires the exercise of judgement'.

This appeal reveals the tensions in the planning system between the need to satisfy policy objectives and achieving them through specific development proposals. Overriding national policies emphasise the need for plans to be deliverable; but being 'deliverable' in a market economy requires maintaining the business case for development, which comes down to a question of viability in each case.

Planning appeal decisions do not set precedents. In accordance with the government lawyer’s rebuttal, the application of policy should 'proceed on a case-by-case basis in practice'. The inspector’s application of policy proceeded on the basis of taking the headline affordable housing target and moderating it by reference to other material considerations, to arrive at a level which he judged to be deliverable at the time.