One thing leads to another

In the first in a series on the causes of damp, Mike Parrett looks at the connections between building design, failure and occupants’ lifestyle

In 2006, CABE’s publication, The cost of bad design stated:

'Too often, the people who design and construct buildings and parks don’t worry about whether they will work properly or what will they cost to run ... But the public has to live with badly built, poorly designed buildings and spaces.'

It cites examples such as the Holly Street ‘snake blocks’ built in the 1970s in Dalston, London. Before their demolition, problems included dark staircases, badly situated lifts and poor estate lighting. But this publication only offers architects’ views of poor design and does not comment on the towers’ actual functionality, the effect on residents and the many damp problems.

William Morris, founder of the Society for the Protection of Ancient Buildings, advocated regular maintenance to stave off decay. Various types of buildings since demonstrate that poor access leads to poor maintenance, decay and decline, and often to damp problems.

The Construction (Design and Management) Regulations were introduced in 1994 to improve building design and the safety of those maintaining them. At their launch, a speaker showed photographs of a building with a ring of lights high above the lobby. Without access for a safe working platform, changing a lightbulb was expensive and risky. Poor design meant they would gradually expire and may not be replaced.

Materials also play a major role. The original design of Borough Market required 70 tons of thin code 3 lead to be resin-bonded on to plywood sheets for roof panels, but when the sun warmed the lead it just de-bonded. The architect was trying to reduce the roof weight and expense, but did not consider the environmental issues.

Surveyors should consider the failures associated with different classes of buildings, which often provide clues to the risk of dampness.

Improvements to older properties (e.g. adding loft insulation and blocking up old fireplaces) mean inherent defects from different building types may not be identified. Many improve the energy efficiency of buildings but also hermetically seal them and retain moisture. 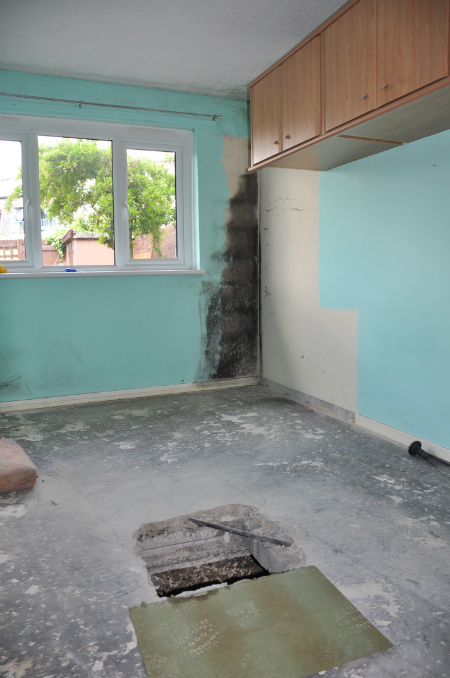 Figure 1: Black mould to external corner of party wall behind bedroom furniture. Mould also found at bottom of external wall. Level 1 or 2 surveys suggested use and occupation and/or penetrating damp (via high abutting external timber decking) was to blame. A Level 4 survey found construction and design issues were the main causes

A serious problem associated with energy-saving solutions is retrofit cavity wall insulation. Some fibre insulation retains moisture penetrating from the outer leaf of the wall. After flooding, wet cavity wall insulation may not dry fully, allowing moisture release through the inner leaf into habitable spaces. This creates the conditions for mould long after the drying-out period.

Without large-scale monitoring of environmental conditions inside properties, it is impossible to fully establish the effect of use and occupation on dwellings. However, I have seen many examples of people unwittingly contributing to damp issues.

Someone on a budget may buy a second-hand tumble dryer with a missing hose, for example, but an unvented dryer can pump around 7.5 litres of moisture into the atmosphere in 24 hours. Occupants in social housing or fuel poverty often underheat homes; in some, I have struggled to record internal temperatures above 12ºC (below 15ºC damages the health of children and the elderly). These homes are often thermally inefficient, with large external solid wall areas, single-glazed windows and no loft insulation. Poor heating and heat loss increase the risk of condensation and damp, especially when combined with building defects.

Societal and cultural problems may contribute to dampness. Some people living on ground floors may choose never to open their windows or curtains because their rooms are visible from outside. Installing tinted, one-way glass may encourage them to do so and improve ventilation.

Accommodating different cultures is very important. Some bathe by pouring water over themselves; if this splashes over the floor it could penetrate into a property below and/or cause the rotting of nearby timbers. If bathrooms were converted into wet rooms, people could bathe however they wanted.

Another occupant-related issue is overcrowding. Even an overcrowded PassivHaus would have problems because of the extra moisture in the internal air.

It can be dicult to identify the true cause of damp. For example, crescent-shaped mould can indicate internal atmospheric moisture, but from use and occupation, building defects, such as dampness coming through the solid floor or walls, or both?

We should consider some definitions:

These definitions are important because:

It is easy for surveyors to assume that mouldy walls are due to occupants’ lifestyles. In a HomeBuyer Report, surveyors can cover themselves by stating it could be caused by the three principal mechanisms of rising damp, penetrating damp or condensation.

But there is no specific diagnosis. This inexorably leads to the recommendation that the homeowner or purchaser seeks ‘commercial’ help … from those benefiting financially from their own diagnosis. This is like a doctor passing their patient on to a drug company. I have rarely known a surveyor recommend damp-related pathology tests.

Conjecture is risky for surveyors but they should assume nothing. Understanding the different contributing factors causing damp in buildings is pivotal and not assessing all possible causes, or recommending the required tests for a Level 4 survey, is a mistake. 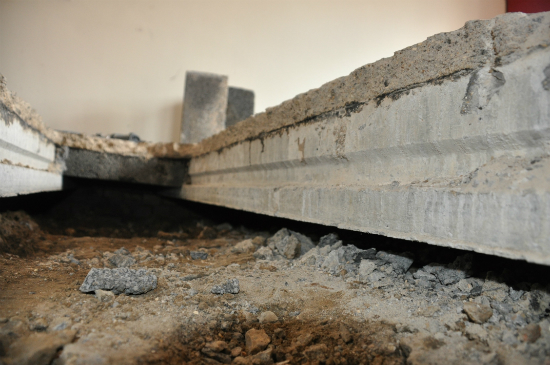 Figure 2: Opening a suspended (block and beam) solid floor revealed high rubble and arisings from original construction, in some areas in contact with the floor’s underside. No DPM to the oversite or vapour barrier to the floor (not a requirement in late 1970s/early 1980s properties on level sites)

Surveyors might make an intelligent assumption from tangible findings, e.g. high readings from timber skirtings, but in my experience, the three main assumptions about damp in walls is that it is caused by failure of:

I can confidently say that if a surveyor finds a high moisture reading in a wall it would be a huge error to assume a problem with the damp-proof course. It is likely to be, for example, a solid floor without a DPM, or even the resistance or capacitance meter coming into contact with conductive material.

The first action should be to ask the occupier about the damp problem. Has it always been present or has it started suddenly? Does it happen when it rains or during cold weather? Is there a problem next door? In social housing, the repair history of a portfolio can allow a surveyor to identify common problems.

Figure 3: With evidence of distressed wood laminate flooring, a mechanical hair floor hygrometer was sealed to the exposed floor trapping a pocket of air, which stabilised at 90% relative humidity. As per BS 8203:2009, the solid floor was damp above the tolerable level (75%) for overlaying with floor coverings. Further investigation was required (see figure 4)

The next step is to produce a floor-plan drawing, particularly if damp is at ground level. This is a pathological storyboard showing your measurements, indicating, for instance, where they were taken and the equipment used. You should photograph your instruments to record evidence of your readings.

Measurements using a range of equipment to a Level 4 survey should be considered to find the causes and sources of the dampness, including:

The findings of internal and external reconnaissance should then be compared. For example, if there is dampness in the corner of two external walls, is this from internal condensation or is there a defective rainwater pipe at the corresponding external location?

A surveyor should then form an opinion about the potential causes of damp and indicate any further measurements to pinpoint the source of the problem. 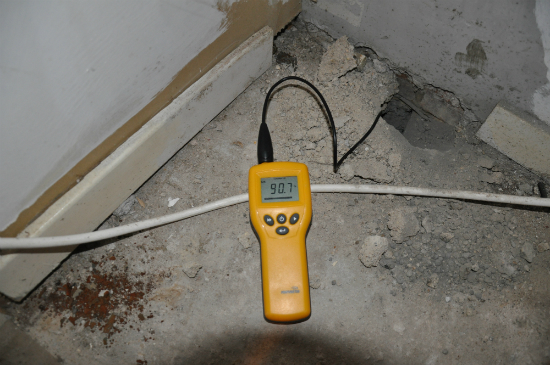 Figure 4: Floor section removed to look for a DPM. We found the solid floor was not ground-supported but suspended block and beam. A hygrometer probe was inserted to measure the moisture content of the sub-floor air, which was found to be 90.7% relative humidity and at equilibrium with moisture transfer through the floor. An optical endoscope examination confirmed significant rubble and arisings in contact with some sections of the floor

Some tests may be beyond the scope of standard surveys, but by understanding the symptoms, surveyors can refer clients to further pathology work in a more prescriptive way, similar to a GP referring a patient to an independent medical specialist. The findings will help educate clients in follow-up actions and conversations with experts in damp.

Understanding a building’s design, layout and construction materials are vital when determining the risks of moisture intrusion. If there is little or no contribution of dampness from these sources then occupiers’ lifestyle must be considered, possibly requiring periodic environmental monitoring to measure their impact on the dwelling.

Without a holistic approach to damp, it can be difficult to differentiate between the various causes due to building design, building failure and occupants’ lifestyle – and the connections between these. That is why Professor Malcolm Hollis said: 'Surveying buildings is an art, verifying the cause of failure is a science'.