Comparing the market is not enough

So many times in my years as an auditor I have heard the statement: “Why should I justify my valuation? I have been doing this for 30 years and know my market.”

It always sets alarm bells ringing. It shows a shocking lack of professionalism, ignorance of the Red Book as a set of mandatory minimum standards for all valuers, disregard for published RICS guidance, a worrying lack of concern for the long term and total amnesia about events in the profession during the past 10 years.

The selection of comparable evidence relies on the well-established principle of substitution – a prudent buyer will not pay more for an item than the cost of acquiring a satisfactory substitute. Where the market is imperfect and these are not identical, the substitute will require quantifying and analysing to render it directly comparable to the subject.

On this basis, the identification of comparable evidence is the search for the most appropriate substitutes. A supporting rationale is the process by which imperfect substitutes are made directly comparable. The extent of the rationale will reflect the diversity of the identified substitutes.

The valuer needs to look for properties that are identical or similar, recently transacted, arm’s-length transactions and verifiable. Recent transaction data can be either direct (properties sold by local estate agents, transactions about which the valuer knows personally) or publicly available (e.g. Land Registry, industry websites, databases). Where this is not available, asking prices and historic data may be considered, but not without a comprehensive supporting rationale for your final valuation. As a support to existing comparables and as part of the rationale or adjustment for the final figure, the use of market indices and automated valuation models can be considered.

Comparable evidence should be recorded on the file, preferably in a consistent format in all cases, its relevance to the subject property and final valuation identified and contribution to that figure made clear.

When researching comparables, do not rely on influencing factors that could distort the end result; each valuation should stand alone

Suitable comparables need to be analysed and adjusted, in line with the principle of substitution detailed above. Ensure that you are comparing like with like and not just obvious factors such as property type, location, size and condition. Are the lease details comparable (remaining term, escalating ground rents, onerous stipulations); are there any restrictions that may affect value; are planning and Building Regulations approvals distorting figures – have they been obtained where required; is listed building consent a factor?

The adjustment may reflect qualitative issues (is it in a poorer condition?) or quantitative matters such as difference in size. It may be necessary to break down the elements of the property to render it comparable. Above all, your analysis and conclusions must be clear to any third party who may read the case file.

Once this exercise is complete, review your analysis to ensure that it fully reflects your thinking. Ask yourself whether it is legible, relevant and comprehensive. On reading your file, would a third party arrive at a similar conclusion?

Legal and General Surveying Services (LGSS) research confirmed the need for both comparable evidence and an effective rationale to explain a valuation. LGSS audits a proportion of the many thousands of cases it manages each year. When challenged, many valuers responded that a rationale was not required because “the comparables speak for themselves”.

Geoff Bramall, LGSS Technical Manager, conducted a simple experiment based on a real-life case, which was published in the LGSS Technical Newsletter. A sample of 160 residential valuers was divided into two groups and asked to analyse a test property and select an estimated value from a range of options. One group was provided only with a matrix of three comparables; the other was given the same matrix and a brief explanatory rationale.

However, when the comparable evidence was supported by a simple rationale, it produced a much narrower range of opinions, as seen in Figure 2. 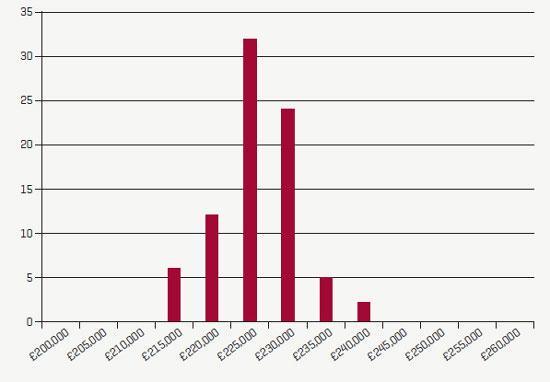 Put together, it is clear that it was easier for a third party to arrive at an opinion when presented with a rationale to explain the valuation thought process (Figure 3). 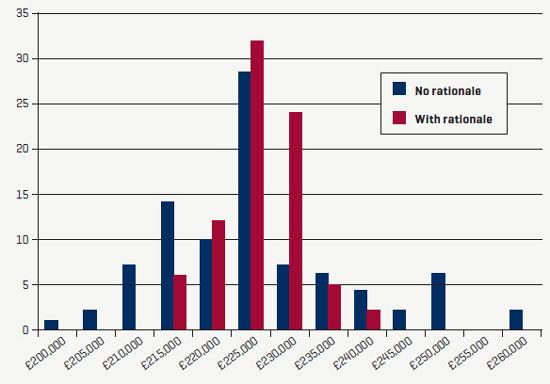 The rationale simply explained the adjustments made by the original valuer to the presented evidence to arrive at the end value:

The comparables certainly did not speak for themselves. Surely this case study proves the value of a rationale.

A word of caution: when researching comparables, do not rely on influencing factors that could distort the end result, e.g. a purchase price, builder or vendor-supplied information or incentives. Each valuation should stand alone. Valuers who work back from a purchase price or estimate to justify their own valuation are (and have been) open to criticism in court.

Case law accepts that there is a level of tolerance in valuation (depending on the nature of the property), but undue reliance on external influence and indices will not reflect well on you if you have to justify your figure.

The LGSS case study was a fairly standard property, but what happens when comparable evidence is in short supply? This could be for many reasons, including an over/underactive market, an unusual or unconventional property, a new market or development, or restrictions on the enquiries you can make. The Red Book is clear that the valuer must comment on any issues affecting the certainty of valuation. Their report must not mislead or create a false impression about the level of confidence in the valuation (VPS3).

Where you find yourself faced with an element of valuation uncertainty, consider the use of special assumptions; these must be realistic, relevant and valid (VPS4) or sensitivity analysis (the effect of a change in variables). All issues affecting the degree of certainty must be detailed in the report and any mathematical models used to arrive at the figure explained. Ultimately though, you must come to a clear conclusion and provide only one valuation figure, not a range.

Emma Vigus of Howden Insurance Brokers confirms that, in its experience, a claimant is most likely to succeed when the valuer fails to show they have followed the right methodology. Howden suggests approaching every job as if a claim will arise, ensuring that the site notes provide the ‘muscles to the defence of a claim’.

In its words: “Neither an overvaluation nor a missing defect is negligent in itself. The aim is to show that even if an overvaluation has been made or a defect missed, nevertheless the survey was carried out with the reasonable skill and care of the ordinary, skilled professional.”