The detection of asbestos in soil is becoming a pivotal point in the redevelopment of brownfield sites and in contaminated land projects. However, for many developers and demolition and construction companies, the risks associated with asbestos in soil can sometimes be overlooked or underestimated at the desktop stage. Consequently, asbestos is commonly identified only during ground works or after demolition or redevelopment works begin.

The impact of not suitably reviewing, risk assessing and characterising a site for asbestos-containing materials (ACMs) may not only significantly increase a project’s duration and cost, but also risk exposing site workers and local residents to such materials. This can lead to reporting of injuries, diseases and dangerous occurrences (RIDDOR) and Health and Safety Executive (HSE) involvement, as well as possible criminal prosecution and civil claims.

Asbestos is a category 1 human carcinogen that was extensively used in construction materials before its use was banned in the UK in 1999.

Asbestos in made ground and soils is predominantly immobile, although when contaminated ground soils are disturbed, fibres are more likely to be released. These fibres may be inhaled and could potentially cause respiratory diseases. At present, there is no safe exposure threshold for humans, and the main risks are associated with breathing in asbestos fibres.

The Control of Asbestos Regulations require employers to assess any potential for their employees to be exposed to asbestos. Asbestos can find its way into made ground and soils in many different circumstances. These include the historic demolition of buildings containing ACMs, fly-tipped waste, earlier use of the site, and previously ineffective remediation of areas that may have been contaminated. 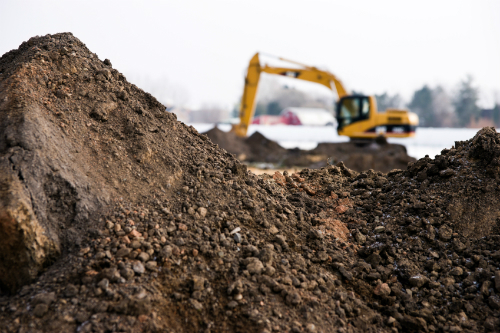 The following questions are useful to take into account when planning asbestos-related fieldwork.

Asbestos fibre release from soil depends on multiple factors including:

Very low concentrations of asbestos fibres may be present in soil and made ground, and these fibres may not be visible to the naked eye. Thorough analysis of soil therefore accurately quantifies any asbestos fibres present as a percentage of the overall mass, and this information can, in turn, be equated to occupational risk and the practices associated with its removal and disposal or re-use.

The control limits in the Control of Asbestos Regulations 2012 stipulate that if the work generates less than 0.1 fibres/cm3 over four hours or 0.6 fibres/cm3 over 10 minutes (also referred to as STEL – short-term exposure limit) then it is non-licensed work. If these levels are exceeded, then the work becomes licensed, and the contractor must be an HSE Asbestos Licence holder. In addition, the type of ACM identified also dictates if work is licensed or non-licensed. In all situations the work must be carried out by suitably trained personnel and companies.

In traditional building surveys, there is no requirement to undertake quantitative analysis of asbestos, with the regulations instead focusing on the type of ACM in use rather than the percentage content of asbestos. However, for those involved in the contaminated land sector, there are many legal and regulatory obligations that need to be considered.

To meet all regulatory requirements, and to ensure that the potential presence of asbestos in soils is assessed in the required manner, soil samples are assessed in a tiered process to identify whether asbestos is present (qualitative analysis), in what composition (asbestos type determination) and in what quantity (quantitative analysis).

Prior to a site investigation, an initial site pick of ACMs at the surface may reduce the likelihood of asbestos fibres being disturbed. However, in order for a sampling strategy to enable adequate characterisation of a site for ACMs, soil samples sent for laboratory analysis should be targeted both horizontally and vertically, and, importantly, include visual assessment of excavated soil arisings.

Trial pit and borehole sampling are carried out through the made ground layer on a site or land area and 1kg (around a litre) of soil is sampled. Careful attention is given to the entire sample collection as well as to laboratory handling to avoid any spread of potential contamination. Trial pits and borehole locations in the site under consideration are properly reinstated.

This original soil sample is screened for visible asbestos products in the laboratory; if these prove to be present, they are weighed and analysed. Further analysis for asbestos fibres is undertaken, and these are also separated and weighed. Measured weights are then scaled back up to represent the entire sample quantity, and an overall percentage for asbestos content in the soil is worked out. 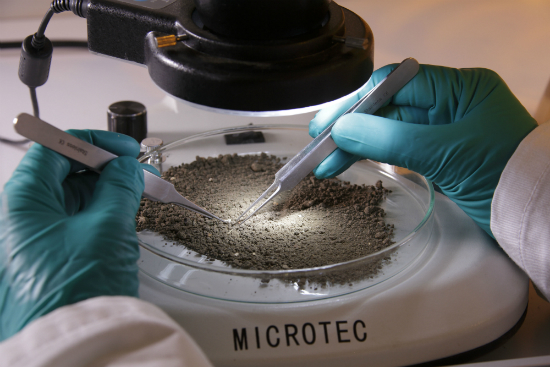 If asbestos products or fibres are not detected, further sedimentation analysis may be carried out if a client requests. This involves a sample of soil being dissolved in water and an aliquot passed through a filter. The filter is analysed using scanning electron microscopy (SEM) and energy-dispersive spectrometry (EDS). If fibres are found, then quantities are measured and scaled up to the original mass and an asbestos percentage content is reported.

Air monitoring analysis on a contaminated site is carried out using phase contrast microscopy (PC M). This is the UK standard method and analysis is in accordance with HSG248 Asbestos: The analysts’ guide for sampling, analysis and clearance procedures. The PC M must be carried out by a UK Accreditation Service (UKAS)-recognised testing organisation, and measures the airborne concentration of fibres that have dimensional properties (i.e. within the correct width/length range) consistent with those of respirable asbestos fibres.

A PC M test does not, however, discriminate between asbestos and non-asbestos fibres, because all fibres fitting the correct criteria are counted; as such other 'background', non-asbestos fibres are a possible component of the result. However, where there are known sources of interference fibres, such as organic machine-made mineral fibres, SEM UKAS-accredited laboratory testing may be appropriate, because it is able to achieve the higher sensitivity that is more appropriate to environmental monitoring.

The ‘wonder’ mineral of over 50 years ago, asbestos continues to leave a lasting legacy of considerable health risks. To minimise these, it is vital that all those who have a responsibility for managing asbestos or who could potentially come into contact with it during building works should have the correct knowledge, training and support to deal with this material safely.

Alec Hales is a specialist in contaminated land at Lucion Environmental