It is more important than ever for property professionals and landowners to be aware of invasive weeds in the UK. A combination of a recent EU regulation and community protection notices have put plants such as Giant hogweed and Japanese knotweed firmly in the spotlight.

The new approach started with the reformed Anti-social Behaviour, Crime and Policing Act 2014 and associated community protection notices, which can force landowners to deal with these plants. Companies could be fined up to £20,000 and individuals up to £2,500 for failing to tackle the problem.

Meanwhile, EU regulations that came into effect in January 2015, could mean fines of thousands of pounds and prosecution if certain invasive plants are not managed appropriately and in a timely fashion. That list is currently being drawn up.

The regulations empower government agencies to issue control orders for the removal of high-risk species from specified areas, which could include derelict sites, public land, construction sites, residential and other properties.

Importantly, these measures are promoting risk-based assessments linked to avoidance and preventative measures as well as identifying and cutting off pathways of spread. The ability to implement a rapid response, should an undesirable plant invade a property or asset, is encouraged – a direction already being taken in Scotland.

The weeds to be listed could include Himalayan balsam, Giant hogweed and Japanese knotweed, as well as species not yet present or widespread in the UK and Northern Ireland, such as Ragweed.

As a result of the measures, there has been a significant shift in the number of property professionals wanting to get a bigger picture of the implications.

The Property Care Association (PCA) Invasive Weed Control Group recently added guidance on non-native plants Giant hogweed and Himalayan balsam to its series of briefing notes, giving the history and identification, the impact of each plant, and details of control methods.

The PCA information supports existing guidance on Japanese knotweed (Fallopia japonica), which has become increasingly well known in recent years, and is a growing commercial problem because of the challenges it causes in the urban environment. 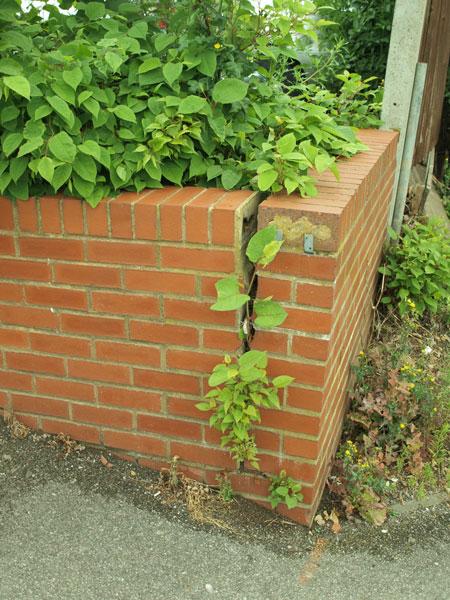 Where the plant grows on development sites it can cause damage to services and any structures and surfaces that are in poor repair.

We continue to hear from specialists about homeowners who are struggling to sell homes or secure mortgages on properties where Japanese knotweed is within 7m of buildings.

Loan applications and re-mortgages are being refused by lenders, without first seeking the views and advice of the specialist, despite guidelines set out by RICS in 2012 to assist surveyors in understanding the procedures that should be followed where Japanese knotweed is discovered.

The species was introduced to the UK in 1825 as an ornamental plant for large gardens due to its imposing size and attractive sprays of creamy-white flowers. But, by 2000, it was to be found in just about all urban areas across the UK.

The plant spreads very effectively through fragments of underground stem (rhizomes) and, occasionally, from sections of fresh-cut stems.

Giant hogweed (Heracleum mantegazzianum) was introduced to the UK and Ireland from south-west Asia as an ornamental plant in the mid-19th century. It soon escaped cultivation, aided by its prolific seed production (as many as 50,000 per plant) and now grows wild across the country and is spreading to more and more locations.

It spreads using pathways such as wind dispersal, for example along transport corridors, through watercourses, and in transported topsoil.

It can cause delays and additional costs on development sites and seed heads and soil containing seeds must be removed as controlled waste.

There is also a significant health factor associated with this plant. The sap is extremely toxic to the skin in sunlight. 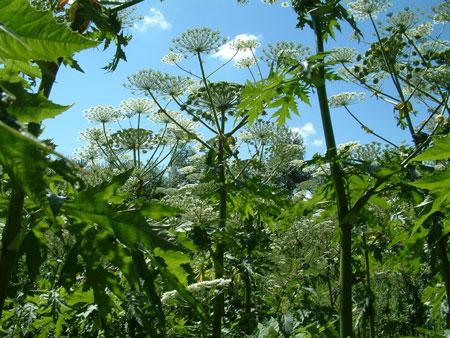 The chemical in the weed, a furanocoumarin, causes blistering and other dermatological discomfort that can recur over a number of years. Hence, fine weather and the plant’s occurrence in locations accessible by the public increases the likelihood of people being injured.

While Himalayan balsam (Impatiens glandulifera) does not have the same economic impact as Japanese knotweed, nor the health concerns of Giant hogweed, it is of concern particularly in relation to watercourses. It is well established in Great Britian and Northern Ireland and extremely invasive in lowland areas especially along streams and rivers.

The plant can spread rapidly on the soft banks of watercourses and grows to 2m tall. In times of flood, it can seriously impede water flow in streams and rivers. In winter, when the plant dies away, the banks are exposed to erosion much more so than in Japanese knotweed. These factors make it an important plant to target.

Ragweed (Ambrosia artemisiifolia) could become a significant problem if it were to spread and proliferate in Great Britain and Northern Ireland. The recently published Field guide to invasive plants and animals in Britain describes it as a “medium to tall erect annual herb … the stem giving an aromatic smell when broken and with deeply lobed leaves”.

The pollen causes hay fever and for this reason the plant is a serious weed in North America and other parts of Europe, but although found quite frequently in the UK it rarely persists. But given factors associated with climate change, Ragweed might well be able to establish itself and become a problem species.

Japanese knotweed will continue to be a focus for land and property professionals because of the delays it can cause on development sites.

But Giant hogweed has opened another debate in terms of the impact this invasive weed can have on land managers and owners, including local authorities. Particular concerns have been raised regarding liability issues given the significant health threats, as well as effective methods of controlling its spread.

Recently the PCA held an inaugural conference in Cardiff, dedicated to the subject of non-native invasive plants, providing a platform to debate these issues and many others.

Japanese knotweed and other invasive weeds can be managed, controlled and eradicated using the knowledge and experience of specialists in this field. By bringing together professionals collectively, we saw how we can work together and collaborate – and start to root out the issues of invasive weeds effectively.