"When we survey buildings we aim to minimise the time we spend on-site," explains Luke Blake, an Associate and technology expert at Australian-based architectural practice Conrad Gargett. "We find clients prefer to spend the majority of their budget on design time to realise the very best architecture possible."

Using traditional tape and Disto techniques, the practice found that survey teams were recording hundreds of measurements as they tried to capture every detail, increasing the cost of measured building surveys. "We even took photos as a memory-jogger but still on occasion we missed bits, forcing us to return to site a second time to fill in the blanks," says Blake.

This 'analogue' approach is a common problem for all architects and building survey teams. In response, UK-based GeoSLAM developed digital survey solutions for the measurement and mapping of multi-level 3D environments. Now, with its ZEB1 handheld laser scanner, an individual can collect measurement data while walking through the target survey environment; eliminating the need to return later.

Blake first saw ZEB1 when representatives from the University of Queensland and CSIRO (Australia’s national science agency) visited Conrad Gargett in Brisbane. "We were all immediately impressed with the speed and accuracy of the measurement data," he recalls. "We could see that with ZEB1 we would spend far less time on site and could more easily measure inside hard to reach places such as manholes and crawl spaces under houses."

After comparing the ZEB1 with fixed-point laser scanners mounted on tripods, the team found that the scanner was easier to use, offered greater mobility and enabled survey teams to complete measured building surveys in a fraction of the usual time. "We recently spent 3 months measuring 12 heritage buildings using a tape and Disto," explains Blake. "With ZEB1 we could have completed all 12 in just 1 week." 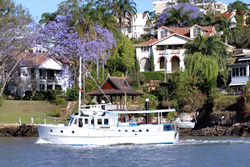 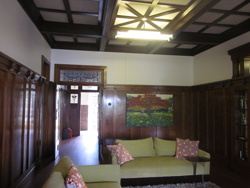 During the trial, the survey team learned a number of valuable lessons. "To achieve a high level of accuracy we break up our scans into logical groups and we close the loop on every scan," says Blake. "For example, we completed the survey of a 3-storey house using 4 separate scans: ground floor, first floor, second floor, and external envelope." Back in the drawing office, the team aggregated the scan data to reconstruct the building inside their building information modelling (BIM) software environment. "We bring the scans into Autodesk Revit as links and align them so we can accurately build our virtual model."

With this scan-to-BIM workflow, Conrad Gargett is able to omit the usual scan registration phase, most common when using multiple fixed-point scan locations, saving time and money. The team is also achieving accuracy levels of +/-10mm in some places, which according to Blake, "compares favourably with a Disto in real world conditions."

The levels of accuracy achieved by Conrad Gargett while using the GeoSLAM ZEB1 could be aligned with International Property Measurement Standards (IPMS) and the new RICS Property Measurement 1st edition 2015. Relative accuracy tolerances of +/-25mm can be achieved in compact buildings, and ongoing industry testing compares it favourably with 'traditional' laser scanning when dealing with large areas.

Best practice procedures such as the inclusion of 'survey control' is still needed to reduce absolute control errors and the accurate linking of building elements, for example rooms and floors. But James Kavanagh, RICS Land Director, comments: "It is a wonderful technology with a great future ahead of it. Possible applications are myriad and it could be a perfect solution for valuation and agency measured surveys when medium accuracy requirements (1:100 – 1:500 scale) are needed."

The ZEB1 advantage realised by Conrad Gargett is even greater. According to Blake: "Unlike a measuring tape or Disto, which takes a single measurement between two walls, the ZEB1 takes thousands. Our Revit users can then pick the average of all measurements as a reliable distance when constructing their BIM models."

There are, of course, situations where greater levels of accuracy may be required; perhaps where steelwork is fabricated off site before being bolted together on-site. In such a scenario, Blake's survey team may return to site to check those areas with a steel tape or a hand laser.

"We have enjoyed great success with ZEB1 because we set expectations honestly; we are clear with stakeholders that ZEB1 is not a fixed-point scanner and as a result you will not get a beautiful, dense, colourful point cloud. What you do get is a very fast way to measure a building far more comprehensively than you might with a tape measure and at a fraction of the cost. For our needs the ZEB1 is perfect 95% of the time."

Conrad Gargett is at the forefront of architecture in Australia with a legacy of prominent and enduring designs. Since 1890, the practice has grown and now operates from offices in Brisbane, Sydney, and Townsville to deliver projects across health, heritage, research, defence, education and commercial sectors.