A significant gap separates countries making the leap from 'developing' to 'developed' economic growth. Peruvian economist Hernando de Soto, author of The mystery of capital, believes the chasm that separates countries is attributable to the formalisation of land and property rights. As a consequence of exclusion, a black market economy exists, according to de Soto, which results in 'dead capital' that can neither be taxed, capitalised, nor protected under the rule of law.

According to the Lincoln Land Institute, OECD member nations – a collection of 'developed' plus middle-income countries such as Mexico and Colombia – generate on average 2.12% of GDP from property taxes. In comparison, the percentage for developing nations is 0.6%.

A clear link exists between a government achieving self-sustainable and self-managed revenues for their people and its ability to operate the institutions and technology that serve to generate and process those revenues.

Valuation information and data is under-used. This is especially acute in the developing world. Worse, there seems to be a prescribed linear notion that without land rights recording and registration, effective valuation and property tax systems cannot be implemented.

Richard Almy, in his formidable work A global compendium and meta-analysis of property tax systems, refers to "a little studied topic" – the effectiveness and costs of valuation systems and prescribes strategies – "for economising on valuation".

This relates to what the industry refers to as the 3Ss of a land information or property tax system project — designed with sustainability, security, and scalability as a guiding standard. There are 2 bases of the 3S; operational and technical, which are interrelated and interdependent (see Table 1).

It was against this backdrop that Thomson Reuters endeavoured to examine more closely the benefits of a valuation modernisation project for a specific country, applying a model developed by international consulting firm KPMG to the City of Cape Town’s Valuation Office modernisation project.

"The process of assessing the consequences/impacts likely to flow from a specific course of action. The focus is on the impacts that alter the manner in which people live, work, and relate to one another."

Sustainability: The modernisation project served to reduce the cost of general valuation, increase staff productivity, add more property taxes to the tax roll, and reduce the number of citizens' objections. By all measures, the valuation offices achieved their goals. 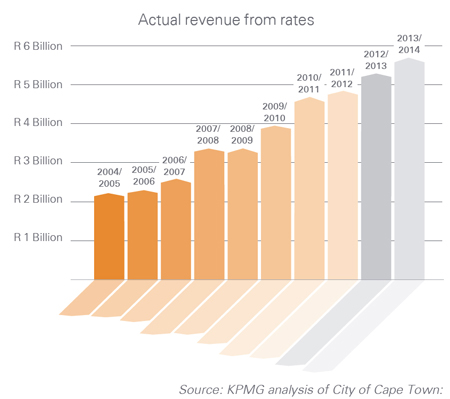 Modernisation was designed to reduce costs while enhancing revenue generation. From 2000 to 2009, general valuation costs were reduced by Rand 94m (US$7.7m) with the introduction of improved methods, processes, and technology. Adding the increase in tax revenues from 2008-09, the return of investment from the cost savings and revenue increase versus the system cost, the city had a return of $97 for each dollar invested.

Again, not all of the cost savings, nor all of the revenue increase, are attributable to the technology. This needs to be considered in the light of the city's entire modernisation effort, inclusive of legislative changes.

Scalability: Improving data accuracy and accessibility led to greater reliance on the valuation roll to check the authoritative ownership status. Scaling this system for greater use by more stakeholders, such as through web access, and having trust and confidence in this information source, has spread the use of this data across government.

One example is verifying seller information as a check against fraudulent land sales. This is an acute problem across Africa and many other developing nations, with a very large black market for land and property sales. The valuation roll identifies those responsible for paying taxes, and discourages nefarious practices.

A clear link exists between a government achieving self-sustainable and self-managed revenues for their people and its ability to operate the institutions and technology that serve to generate and process those revenues.

The city's transportation department is using the valuation roll to create new bus routes as the values of homes in specific townships determines demand for services. The data is being scaled to connect low-income townships with
transportation to central business districts. As a smart city, Cape Town recognises that urbanisation requires getting people closer to jobs. The treasure trove of data also helps the municipality for planning purposes. Future analytical applications could include extrapolating information on predicted future government revenues to support either areas with home values, or by conducting planning scenarios based on the impact of a rising or falling tax revenue base and the ability of the government to deliver services or infrastructure projects.

Security: The importance of security of land tenure is stressed, and government effort to value properties to generate tax revenue and encourage more active participation are a key outcome of the modernisation project.

More people have been spurred to join the formal system, and the Cape Town Municipal High Court bases estate values and decisions on this information. First, ownership rights can be authenticated from the valuation roll and secondly, land value can be queried when making decisions over estate inheritance. This is hugely important for parents, who want to be assured that their family or next of kin will receive their property and land. They want rights well recorded by the courts, and these rights to have an authoritative rather than arbitrary value assigned for this property.

The report also identifies a link between bank lending rates, and the use of government valuation data to support lending decisions based on collateral – as a source to confirm and identify land ownership rights associated to an individual's collateral assets.

Cape Town has instigated an incentive programme to support people whose incomes fall below a certain threshold by offering them free water management and leak services. Since 2003, they have added 18% more households, in total supporting 238,000 households.

To instill trust and belief that the processes and systems are fair and equitable, the city is providing the incentive before instituting taxation – engendering an understanding of the benefit of the formal system.

The African Tax Institute summarised this point in its recent report How property tax would benefit Africa:

"The future of African national and municipal governments will depend on institutions and tax policy that are equitable, improve local service delivery and encourage compliance through establishing a social contract between taxpayers and the state. Property tax is one of the more effective means of realising these goals."

Thomson Reuters commissioned the report to add to the professional body of knowledge so it can, in partnership with governments, better assist design, fund, plan for, and support modernisation. The KPMG approach has great applicability for other governments, especially in the 3S framework. Practical applications include:

It has been recognised, such as through research Thomson Reuters conducted with the US National Association of Counties, that deeper and better analytics is a top technology trend for governments. What we are now seeing is only the tip of the iceberg for societal and government-wide gains related to the use of authoritative valuation information.