Out of the ordinary

With most of 2015 passing without any dilapidations cases, three – quite unusual – cases have emerged in recent months. The Creative Foundation v Dreamland Leisure Ltd & Ors [2015] EWHC 2556 (Ch) concerned part of a wall removed by the tenant that contained a mural painting by Banksy. The art had been applied without the consent of landlord or tenant and was estimated to be worth £300,000. The Creative Foundation had stepped into the shoes of the landlord and was seeking delivery up of the wall by way of an application for summary judgment.

The lease contained fairly standard covenants about keeping the premises “in good and substantial repair”, painting the outside of the premises at regular intervals and not injuring any of the walls of the premises or making any alteration without the landlord’s written consent.

For the purposes of this early hearing, the judge accepted that the paint sprayed by Banksy amounted to the wall being out of repair or condition. The options available for remedying the issue were:

The judge accepted that the more invasive work of the third method might be justified if it provided a more long-term solution, but the tenant needed to show that this method was at least as objectively reasonable when compared with the first two options.

The tenant sought to justify the removal of the wall on the basis of the advice it had received, that the wall was likely to attract further graffiti because of the knowledge that Banksy had painted there. However, the judge accepted The Creative Foundation’s point that this problem of future graffiti would remain the same however Banksy’s work was removed. The judge therefore concluded that the tenant had no reasonable prospect of establishing that it was entitled – let alone obliged – to remove the wall containing the mural in order to comply with its repairing obligations.

The court then moved on to consider the parties’ request to imply a term into the lease to address the question of what should happen to parts of the building replaced or otherwise removed by the tenant when complying with its repairing obligations. (The parties were agreed that these items revert to the status of chattels once removed from the building.) The judge decided to imply that such chattels should be the property of the landlord. His reasoning was that:

Presumably, the relevant slice of wall will be making its way back across the Atlantic for the enjoyment of the people of Folkestone shortly. 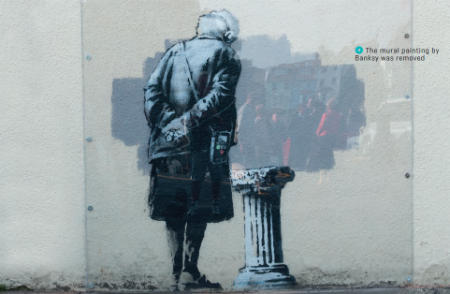 Figure 1: The mural painting by Banksy was removed

Another recent case offers a good illustration of the fixture versus chattel argument – where the decision on this point had very serious and unexpected implications for the landlord.

Spielplatz v Pearson [2015] EWCA Civ 804 concerned a naturist resort established in the 1930s and owned by Spielplatz. Members originally used their plots to pitch tents and caravans but tastes changed over time and the chalet on the Pearsons’ plot had been built by their predecessor in 1975.

After his death, a tenancy of “the plot or clearing” was granted to the Pearsons in 1992. There was no reference to the chalet within the tenancy document, apart from an obligation to keep the “keep the exterior of any Cabin Hut or other building in GOOD repair and properly painted or creosoted”.

In due course, the Pearsons came to use the chalet as a full-time residence. Spielplatz became concerned about this and served a six-month notice to quit. The jointly instructed expert in Spielplatz gave his opinion in evidence that the chalet “would have been intended to be permanent and was not mobile or movable at any point in its life”.

The Pearsons contended that their chalet formed part of the plot. Their case was that, while the parties did not realise it, the 1992 letting was a “tenancy under which a dwelling-house [was] let as a separate dwelling” and therefore an assured tenancy within the meaning of the Housing Act 1988.

Spielplatz accepted that the chalet belonged to the Pearsons and contended that it had only let the land under the 1992 tenancy agreement. It therefore disagreed that there had been a letting of a dwelling-house so as to attract assured tenancy protection.

The Court of Appeal held that the chalet was not a chattel; it formed part of the land and the Pearsons were therefore assured tenants. The court considered it irrelevant that both parties had regarded the chalet as belonging to the Pearsons. This decision followed guidance from the House of Lords in Elitestone Ltd v Morris [1997] 1 WLR 687, where it was held that a house built in such a way that it could not be removed except by destruction could not have been intended to remain a chattel and must have been intended to form part of the land.

Moving onto a more ‘traditional’ dilapidations case, we have recently had the judgment in Consortium Commercial Developments Ltd v ABB Ltd [2015] EWHC 2128 (TCC). Here, the tenant’s breaches of covenant at the property had not been remedied by the landlord during the four years between lease expiry and the trial date. The landlord claimed that it wished to recover from the tenant before spending money on the repairs required.

The parties’ surveyors agreed that remedying the tenant’s breaches would cost £315,258 and that the works would take around 12 weeks to complete. The claimant landlord also sought loss of rent and rates during that period, amounting to £45,666. It was common ground between the parties that, given the weak state of the market in 2011, the property had little prospect of being let while out of repair.

Since the landlord had failed to undertake the required works to the property, its claim for damages for disrepair was subject to section 18 of the Landlord and Tenant Act 1927. (This provides that such damages cannot be greater than the diminution in the value of the landlord’s property as a result of the disrepair.) The experts’ valuations of the premises at the expiry of the term were widely different, with the tenant contending that the section 18 cap meant a £75,000 limit on any damages claim.

The judge was fairly critical of the approach of both experts to their evidence in the case. The landlord’s surveyor was described as showing “excessive subjectivity” and the judge felt there should have been more careful analysis of the comparable evidence. He preferred the evidence of the tenant’s expert, although he noted that the figures required significant adjustment. Damages for lack of repair were held to be capped (by section 18) at £225,000.

On the landlord’s claim for lost rent and rates for the 12-week period required for the works, the judge concluded from the evidence that the market in the area in 2011 was very difficult even for properties in good condition. He therefore did not feel that the property would have let promptly even if it had been in good condition and rejected this element of the claim. The judge also rejected the landlord’s claim for interest on the damages at the rate of 6% and awarded 2.5% above base rate.

The landlord’s claim of almost £361,000 was therefore significantly reduced to an award of £192,910 plus interest – although this was still almost three times the £75,000 cap that the tenant had sought to impose.

Emma Humphreys is a Partner at Charles Russell Speechlys LLP