One map at a time

The communities living around Outamba-Kilimi National Park near Sierra Leone’s northern border have survived off the region’s lush rainforest for generations. But rapid deforestation, slash and burn agricultural practices, and bush fires are ravaging the area and other parts of the Upper Guinean Rainforest.

The problem for Sierra Leone, when STEWARD was launched in 2009, was that there were no accurate maps of how much forest remained. This is far from an unusual problem in Sierra Leone, where records of land use and ownership were destroyed during a bloody civil war that ended in 2002. Sierra Leoneans still struggle to get land titles for plots that may have been in their families for generations.

While in the capital Freetown multiple people often have titles to the same plot as a result of corruption and fraud, in remote areas, no full cadastre ever existed. Such official registers denote what rights and responsibilities people in the community have to specific plots of land.

Instead, the land and resources are owned by local chiefs and leased to the population by word of mouth. People’s rights to parcels of land and resources are determined by complex relationships between clans, as well as immigrants from neighbouring countries and regions and conflicts festered. Boundaries were traditionally defined by landmarks such as big trees or streams. Thus, a family might be given the right to farm a piece of land between two mango trees. But if the trees are chopped down, they struggle to prove what is theirs when others lay claim to the same area.

And as Sierra Leone opens up to foreign investment in the logging, mining and agri-business sectors, swathes of rural land have been leased or sold to companies without consulting communities or providing any form of compensation. In other cases, it is possible for chiefs who do not have accurate maps to promise companies a certain amount of land without knowing whether they have that much territory to sign away.

With no government official to resolve land disputes within 200km of the Outamba-Kilimi National Park, anyone wanting official documentation has to hire professional surveyors, who charge far more than an average Sierra Leonean can afford.

With the help of Thomson Reuters, 19 communities in northern Sierra Leone and the nearby region have overcome this challenge by surveying and mapping almost 325ha of land themselves.

USFS then taught the communities about the concept of land and property rights, while Thomson Reuters trained them to use Aumentum OpenTitle. This inexpensive software allows rapid documentation and processing of rights and embeds ESRI GIS technology to digitally link people to parcels, and needs little technological know how to build maps and record information. 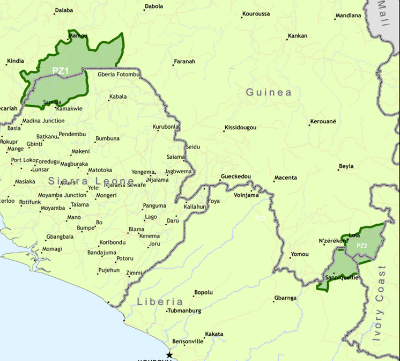 The importance of recording land use agreements on paper was stressed and volunteers administered a survey of each household on size and resources. Where neighbours disagreed on their boundary, the volunteers helped them work it out and note it down. Then they took photographs of people with their plots, and any landmarks, and used hand-held GPS devices to map the boundaries of household land and community forests.

The data, along with satellite images and information from conversations with elders of the community, was aggregated at the mini-GIS centres with Esri’sArcGIS to produce maps detailing the land and resource rights of members of each community and individual households.

Each household received a set of papers with maps and pictures outlining their land rights while each village knew the size of its community forest. Now, disputes can be resolved by checking the records, rather than relying on word of mouth, and the evidence of land rights can be passed down through generations.

The government land and forest agencies were also involved in developing the methodology behind these new records, and the data was structured to fit the official formats, lending real legitimacy to the documents.

It is also the first time that the government has a complete record of the local forest and what belongs to the community enabling design policies to save it. Together with maps that Thomson Reuters is producing for communities and governments in Guinea, Liberia and the Ivory Coast, this will play an important role in preserving the West African rainforest.

Historically, community forests in northern Sierra Leone had been managed by male elders or chiefs who prohibited activities, such as logging and hunting in certain areas, but their ideas and knowledge of sustainable practices were limited. Now community members are taking on board the concept of forest co-management introduced by Thomson Reuters and STEWARD.

Decisions are made through forest management committees, which include men and women of all ages, formed to collectively manage the forest as a shared resource and responsibility. They meet regularly to discuss how to use their land sustainably and, little by little, the community forests are coming alive with environmentally-friendly activities, ranging from honey production to the cultivation of medicinal plants.

Members of the community are also farming more sustainably by using crop rotation and other techniques that keep land fertile, in addition to cutting back on and managing slash-andburn agriculture, a traditional practice that leads to uncontrollable bush fires.

With the maps identifying responsibilities, local communities are beginning to have serious conversations about preserving the forest for their children and future generations. And when logging or mining companies want to invest in the region, local communities can hold up their documents as proof of their rights. No matter how poor they are, it gives them a chance to say, “This is my land and you can’t just take it from me.”

Hectare by hectare, the community members are standing up for themselves and becoming agents of change.

Jamil Hasan is a Project Coordinator at Thomson Reuters