The approach has been used in Singapore, Vietnam, Malaysia, Indonesia, Thailand and Philippines. As the Public Private Partnership (PPP) model is both flexible and adaptable, the definition tends to vary between countries.

Globally, PPP is far from being a new method. Mature PPP markets, such as the UK, have seen the industry and model evolve to address many of the obstacles associated with early projects. This is due to several factors:

The lessons learned throughout this process have political, societal and cultural sensitivities. As such, while the global PPP community benefits from the experience gained from more mature markets, it is also important that each PPP is assessed within, and tailored to, the unique project context. Because of this, new users will still experience a learning curve, while existing users continue to do so on a lesser scale.

Governments using PPP for the first time can make the most of the lessons learned by the global industry.

As mature markets have demonstrated success in delivering PPP projects, there has been an increasingly strong interest for PPP procurement-based projects in Asia in the recent years. As the region develops, there is a need for building and maintaining quality infrastructure to meet the demand for the growing population and the increase in economic activities.

According to the Asian Development Bank, from 2010 to 2020 it is estimated that Asia’s total infrastructure investment needs will top US$8 trillion, to cope with current challenges of economic growth and population growth. 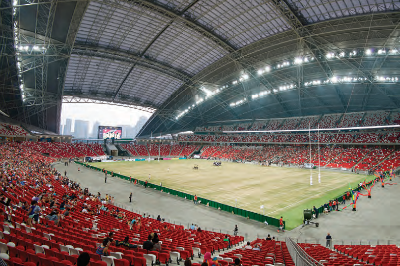 There are numerous and diverse PPP project deals being structured in the emerging markets, ranging from transport and energy infrastructure to social infrastructure. Thailand, Philippines and Indonesia are among the emerging countries with PPP experience with mixed success in development and implementation of the projects.

Highlighting one of the projects in the region, the Singapore Sports Hub (figure 1), is the world’s largest sports facility infrastructure project and includes the National Stadium, multi-purpose indoor arena and the Aquatic Centre. Costing SGD$1.33bn in construction, the 25-year PPP deal was structured to achieve a balance of interest between the public sector, the private sector and members of the public.

It allows the government to get better value for money in the delivery of public services, and provides the private sector business opportunities and gain efficiency and innovation in providing solutions for the government. Since its inception in 2008, various parties have been involved in the collaboration and this has built business partnerships and created job opportunities. The construction took four years and was completed in June 2014.

The 28th Southeast Asian Games was recently held at this facility, hosting most of the competitions, and many upcoming major sports events are scheduled including the Barclays Asia Trophy, the Asian Fencing Championship and the 5th Fina World Junior Swimming Championships.

Since the Hub's inception, various parties have been involved and this has built business partnerships and created job opportunities

As PPP procurement models progress in mature markets, the experience is adopted in the Asian market and integrated in local cultural context. Lessons learned provide valuable guidance in execution of PPP projects.

With the rapid urbanisation in Asia, traditional public service delivery will be inefficient in meeting the demands of people. Provision of public services through PPP will help to alleviate the financial burden on the government. Besides enabling capital investment, PPP encourages knowledge sharing between private sector and public sector.

Continued growth for PPP projects is expected. In the joint ministerial statement at the 21st APEC finance ministers’ meeting in 2014, infrastructure investment and financing is welcomed in the region to realise growth potential and meet development goals. PPP project investment is needed to address funding gaps between infrastructure needs and existing resource capability of the public sector.

While PPP procurement strategy brings about various benefits and opportunities to the public and private sector, there are challenges that limit its progress:

For the developing Asian countries such as Vietnam, Philippines and Indonesia, there will be continued increase in PPP in 2016 to 2025. Looking at sectors specifically, power, water and waste water, and leisure and sports are expected to provide the greatest opportunities.

However, many factors will have to be considered in determining the viability of PPP projects and ensuring success of the long-term contractual deal between the public and private sector.