What are those characteristics of buildings and developments that contribute financial value? RICS commissioned property consultants CBRE to research the link between good placemaking and value. The initial message is that if developers create places that are well planned, designed and built, people are prepared to pay more for homes there.

Good placemaking is about vision, tenacity and standards. It relies on the skills of planners, urban designers, architects, engineers and surveyors. It is also about land management and economics, finance, sales and marketing. Most of all, it is about community participation and politics.

The five residential case studies varied in size, phasing, progress, location and market conditions. Three are extensions to settlements formerly designated as new towns. All were distinct residential neighbourhoods or districts that had an equal opportunity to create a positive sense of place and a cohesive new community.

A number of elements were used to evaluate successful placemaking:

Land Registry data accurately reflected how schemes have sold in relation to local market conditions. Possible connections between successful placemaking factors and the values achieved on these sites were then explored.

The performance of each case study in their local market and against the national average for house prices are shown in Figures 1 to 3. The findings demonstrate positive relationships between placemaking and commercial value. However, a considerable disparity in the size of the premium was revealed, as well as in relation to the typology of the unit. 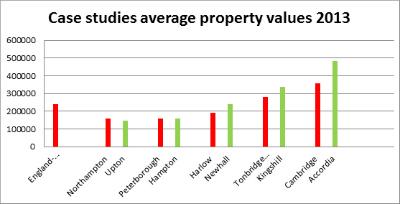 Existing Tonbridge-Malling and Cambridge properties significantly exceed the England and Wales average and the values in the developments at Kingshill and Accordia further exceed these local averages. Where values are already high and demand is strong, good placemaking would seem to further enhance values. The exception is Newhall, Harlow. Of the cases in areas below the national average, Newhall has succeeded in outperforming local area values.

Figure 2 indicates that good placemaking enables housing in the case studies to achieve values in excess of other local new build housing when sold as new. Upton, the weakest performer, exceeded average local new build values by 25%, while Accordia, the strongest, gained 56%. 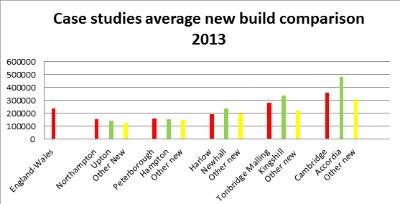 Many case studies followed a similar layout and street pattern. There is typically a core from which main tributary roads spring, interspersed with groups of dense housing. The layout feels less formal and implicitly ‘organic’, even though it has usually been conceived by masterplanners. It is supported by the height of the buildings, and landscaping of the roads. The consistency suggests some unanimity about how to achieve the placemaking goals of planning that satisfy commercial requirements.

Although critical to creating a sense of place, phasing of commercial and community buildings inevitably proves difficult. The lack of provision is probably the most common complaint among pioneer residents and is still common on schemes that should already be well established. This undermines confidence and encourages car dependency.

The most successful examples in the case studies have been where flexible space has been provided. Kings Hill offered offices to early residents as a meeting place, which helped the parish council to engage with the landowners and developers.

Some schemes have built a large supermarket in the centre, such as Kings Hill. Supermarkets are often ‘outward facing’, due to the car parking provision, but ideally would integrate with residential. This is difficult to correct later. 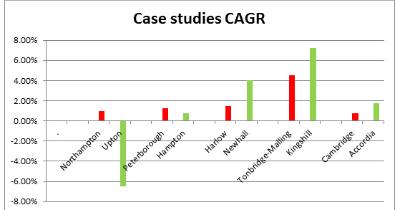 This has been the most prominent community offering. It sets an aesthetically pleasing tone to the development, which creates an ideal shop window and gives pioneer residents confidence. The use of open space balances the high-density levels; rather than larger rear and front gardens, the preference has been for usable space that residents can enjoy. Natural amenities, across all the case studies, allow developers to promote sustainable living.

The intentions were more obvious at some schemes than others. Upton emphasised sustainability through extensive sustainable drainage schemes, as well as the design of the housing. Of particular note was the Metropolitan Housing Scheme, with its experimental eco-houses. Although substantial premiums may not have been achieved, these types of endeavour arguably benefit the industry through innovation and education.

The choice of architecture on new settlements is inevitably subjective. It is essential that it is in line with local market and buyer expectations. Newhall’s contemporary architecture may not suit a location where demand is for traditional homes. Similarly, a neo-traditional development might not suit Harlow. However, in Harlow, where there has been a dearth of new development, the architecture stood out as creative and confident. Similarly, Accordia was a creative departure from the local traditional architectural landscape.

The convincing quality of both the design and materials meant that it was highly regarded both by architects and housebuyers. The architectural standard at these case studies creates a high quality of development. Design codes, which allowed some degree of flexibility, have generally proved successful. They help to create consistency, and with the landowner and planners on board, offer housebuilders sites with much less risk.

The forms of leadership ranged from a hands-on landowner to a detailed masterplan with prescriptive design codes, or to a collaborative exercise. The latter, at Upton, could not respond easily to changing needs and external conditions. The most successful leaderships have been by Liberty Property Trust (LPT) at Kings Hill and O&H Properties at Hampton.

LPT has engaged with residents, instilling a strong sense of ownership. Hampton residents have been slower to take responsibility, but O&H has played a pivotal role in creating a sense of community.

The value analysis revealed that on the most successful schemes in placemaking terms the cheaper family housing achieved the highest premiums. This suggests that young families are willing to pay a premium for these sorts of developments even if they have to compromise on the size of the property.

Where demand is strong, good placemaking would seem to further enhance values

The market for larger executive homes is more open, with more affluent families often preferring a traditional house in a rural area with more space. The detached properties at Upton bucked the trends by outperforming the local market, reflecting the architecture and configuration of these homes.

The greatest re-sales uplift has been at Accordia, whose reputation has grown considerably since its original conception, illustrating the long-term potential of creating a strong sense of place. Most of these settlements would benefit from a greater range in dwelling types and pricing. Smaller and more affordable units at Kings Hill would provide accommodation for the elderly, divorcees and first time buyers. This is key to maintaining and growing the local population.

Pioneer residents typically purchase at a slight discount; at Hampton this was around 10% below local market value. At Accordia, the early sales were key to setting good pricing later. This is likely to be easier on a smaller scheme.

At a time of acute housing shortage, there is a temptation to focus on the numbers of dwelling units built rather than the quality of the places being created. The findings have shown that with clear vision, strong leadership and a creative team, placemaking can achieve enhanced value. But it does require patience, dedication to high standards and the capital resources to think and act with a long-term perspective.