One of the biggest threats to building performance is water, and in particular water vapour, which is simply water in its gaseous phase. Invisible and lighter than air, it forms part of the Earth's atmosphere, but while it is vital to human and many other forms of life it is the most potent of the natural greenhouse gases. Unlike other greenhouse gases, however, water vapour only exists in the atmosphere for a few days; contrary to popular belief air does not 'hold' water. Warm air is able to accommodate more water vapour than cold air – it is formed as water evaporates and lost as water condenses.

Because it is a gas, water vapour exerts a pressure, termed partial pressure. The higher the pressure, the more moisture is present. A body of gas at high pressure will tend to migrate towards an area of lower pressure even if it passes through various obstacles en route.

Another way to assess the amount of water present in air is to measure density. Using the above examples, in saturated air the density of vapour at 0oC is 4.85gm/m3 and 17.3gm/m3 at 20oC. However, simply warming air does not mean that the vapour pressure will automatically change; it will remain the same unless further moisture is added. 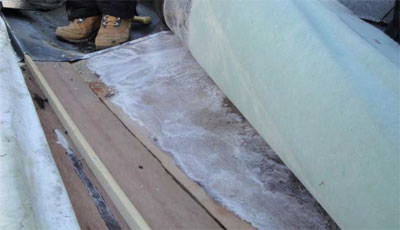 Figure 1: Severe condensation forming on the underneath of lead roofing

To help illustrate the point, consider a body of air externally at 0oC and 100% RH. Suppose that body of air is now moved into a building and heated to 20oC. If no moisture is added, the vapour pressure will remain the same at 0.6kPa but because the air is now able to support more vapour, the RH will drop to approximately 24%. Normal living activities all generate moisture; a person sleeping will produce around 40g per hour, rising to 300g per hour when undertaking moderate manual work. Drying clothes indoors can produce about 1,500g per day and cooking with gas about 3,000g per day. All of this vapour can be accommodated by the warmer air until a state of equilibrium is reached.

Let us suppose that the warm air now accumulates moisture with a density of 10g/m3 of air. This creates a vapour pressure of about 1.35kPa and shifts the RH to 58%. This is comfortably below saturation levels and no condensation is forming. But what happens when the heating is turned off or the air enters a cold room? If the temperature drops to say 16oC the RH increases to 74%. We are now in danger territory, because although condensation has not formed we are uncomfortably close to the point at which mould growth can occur. Generally, the RH in a room will be about 10% lower than the RH close to the surface of an outside wall. So at 74% RH in the room we can expect 84% on the external wall. If conditions are left like this for more than a few days, mould growth is inevitable – long before condensation actually occurs (which in our example would be at 11.1oC). Once mould spores are established, they can continue to grow at RH levels below 80%.

Given the increasing numbers of people suffering from respiratory illness it is very important to keep RH well below 80%. It should ideally fall within the range of 45% to 60% to avoid the development of moulds, some of which are harmful to health.

Once mould spores are established, they can continue to grow at RH levels below 80%

We can see that a high RH can occur at a low as well as high temperature – but it is the vapour pressure that gives a better indication of moisture levels. Our example shows how air has been heated and 'topped up' with water, thus increasing vapour pressure. The pressure differential between inside and outside air means that our body of air will now diffuse through the structure of the building where the vapour pressure is lower. The outside surface of the wall is at 0oC so at some point in the thickness of the wall, the temperature gradient will reach 11.1oC and interstitial condensation will form.

Interstitial condensation may or may not be harmful. In masonry, there is a good chance that the condensed water will dry out fairly rapidly in warm weather. However, in a timber-framed structure the consequences of condensation could be far more severe, particularly if the water accumulates and is prevented from drying out by roof membranes or other impervious layers.

The rate of diffusion through the structure will depend on its vapour resistance and the vapour pressure differential. However, it would be a mistake to assume that diffusion is the sole cause of condensation within a structure; it is far more likely that air leakage will create a bigger problem. To counteract this, a good air and vapour control layer (AVCL) is needed.

The established orthodoxy is to put an AVCL on the inside or warm face of the insulation and provide materials of progressively greater permeability (less resistance) moving toward the outside. However, many external finishes have quite a high resistance to water vapour and this can create interstitial condensation problems. Ideally, impervious (or highly impermeable) systems should have a suitable cavity behind them to drain any moisture that may form and allow it to dry out.

There are potential dangers in any well-intentioned efforts to improve the thermal performance of a building. Adding insulation to a wall might provide a warmer room surface, but the formation of interstitial condensation could have more insidious side effects. By way of example, a rendered brick cavity wall was insulated with blown cellulose fibre. The home owner started to identify damp patches internally and over the space of two winters the external rendering started to deteriorate noticeably. The insulation was restricting air circulation in the cavity while the outer leaf was now remote from the warm interior, lowering its temperature and permitting condensation to form behind the render. This was then freezing and causing the render to delaminate.

In another case, a pitched roof was insulated at rafter level. The lack of an efficient AVCL enabled air and water vapour leakage past the insulation and caused profound condensation on the underside of the slate roof and below a lead-lined valley gutter. Had the situation been left, the life expectancy of the lead lining would have been reduced to no more than a couple of years – if the gutter sole did not rot beforehand.

In the latter case, improving ventilation to the roof space helped to combat the problem although this did rather make nonsense of the additional insulation. Care is needed in situations such as this, because a ventilated or even partly ventilated space in the wrong place can sometimes make matters worse.

In summary, an understanding of water vapour and its effects are essential if we are to continue to improve the energy performance of buildings; it is no good taking construction for granted. As we improve airtightness we raise the risk of high humidity – and unless this is controlled, both our health and the health of the buildings we occupy will suffer.