With tenants already suffering from business rate increases and rising occupational costs, a rent review – as required by many commercial leases – can be a difficult prospect for many shop owners, because the market rents sought by landlords are often fixed for a 5-year term. If a tenant does want to contest a rent rise, though, it is absolutely crucial they are represented by a chartered surveyor, as a recent case proves.

The Little Shoe Shop at 71 York Street in Marylebone, London, opened in 1966, trading as Small and Tall Shoes for many years, then later as Sally Small, before adopting its present name when my client acquired the business in May 2005 (Figure 1). The ownership of the parade where it is located changed hands relatively recently and the new owner was looking to achieve market rents on its shops. The Little Shoe Shop had a rent review at 25 December 2017, where a fairly modest passing rent was set. 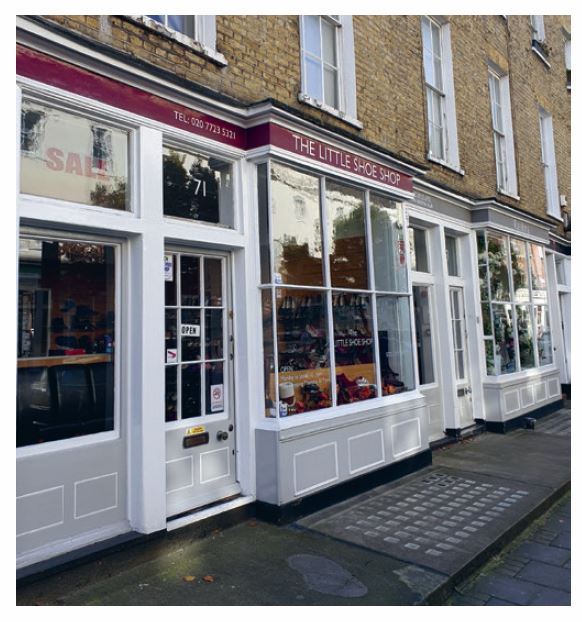 But the new landlord had served a rent notice quoting a rate more than double the existing one – not uncommon within a 5-year review pattern, particularly in a high-value area such as Marylebone. Critically, the adjacent shop at 73 York Street had been let in January 2017, less than 12 months before the review date of 71, at a rate that could be argued to support the level of increase sought for the shoe shop. This was a significant comparable for the rent review, being a virtually identical unit in terms of configuration and let on similar terms.

My client felt the proposed rent was too high, knowing the street well, and having failed to convince his landlord of this he decided to get help and was referred to me as an expert witness Bringing rent to heel Jonathan Shuttleworth Thorough investigation of the local retail market by a chartered surveyor enabled a rent reduction for a small business in one recent case for arbitration. While landlords will invariably take the upper range of rents available when serving a rent review notice, the quoting rate should be supportable and in this case it was. My investigations led me to discuss this with the other landlords on York Street, some of whom had owned their properties for several decades and had historically agreed lease terms and rents directly with their tenants. On balance, those rents were modest in comparison to the recent open-market letting figures.

Such open-market lettings carry most weight when a case comes to arbitration – and more so if the parties involved are professionally represented, as was the case for the key letting at 73. This point was made to my client. My investigations led me to the only other comparable transaction on York Street where the parties were professionally represented, an open-market letting at 92 York Street that involved the surrender of a lease and simultaneous grant of a new one to a new tenant under the Landlord and Tenant Act 1954. A premium was also paid to the outgoing tenant, and this transaction occurred six months before the December 2017 rent review took place.

However, the agent’s analysis for the transaction was showing a rate of £1,055/m2 of the area in terms of zone A (ITZA), which takes into account the impact of the frontage of the shop rather than just its area – even higher than at the letting of 73 York Street mentioned previously. At this point it did not look good for my client, because the only 2 open-market transactions where professionals had been appointed were showing net effective rents of £915/m2 and £1,055/m2 ITZA respectively, which would have supported more than doubling my client’s rent.

Both landlord and tenant made attempts to settle, and indeed compromised by serving their respective without-prejudice Calderbank letters making offers to settle. However, the parties involved were ultimately unable to agree a rent through discussion, and the matter was referred by us to an arbitrator via RICS. 6 months later, the arbitrator awarded a new rent significantly lower than the 2 key lettings mentioned above, equating to £775/m2 ITZA for the subject rent review.

This lower rate was achieved by four main means:

At arbitration, you need to be able to corroborate what you are saying, particularly when it comes to rents. In this case, a couple of rent reviews and some new leases had been agreed directly between owners and tenants on the street. Unsurprisingly there was no agreed analysis of these transactions – but this presented an opportunity for a surveyor.

I therefore inspected and measured the units in question and put together a pro-forma confirmation of rental evidence, with the owner verifying my workings and analysis. The landlord also happened to be a fellow of RICS and was very interested to see the arbitration unfold. Certainly, a rent review or new lease agreed directly can be corroborated by showing detailed floor areas and a specific analysis in a pro-forma confirmation.

If rental evidence is not corroborated, an arbitrator will not give it much weight, if any. In this scenario, where there was no agreed analysis, it was therefore valuable to verify the facts. Floor plans from the lease should be used if possible and marked up clearly with dimensions, so these can be referred to in any submissions.

Another crucial factor in our success was that I independently measured the key transaction at 92 York Street by way of a check. I had noticed that the analysis circulated had floor areas that were identical to those provided in the rateable value for the shop, which should never be relied on at arbitration. When I inspected the property, I discovered there was a whole retail area at the rear that had not been analysed.

Critically for the rent review at the shoe shop, the arbitrator agreed my floor areas for this transaction, and that the stepped rent equated to £775/m2 ITZA. Furthermore, this transaction was seen to reflect the market rent between the upper level at number 73 and the reviews and new leases that had been agreed directly between landlord and tenant in nearby premises in the run-up to the most recent rent review.

As an expert, you need to consider all of the information available and understand points on both sides. We spoke with every landlord and tenant we could and the full picture then emerged. Some tenants had been in occupation for 30 years, others had come and gone very quickly. There is an immense amount of information that can be discerned in this way, and it helps build a thorough case. One thing that struck me here was that there was a genuine concern not just from the tenants but also some of the landlords about high rents, which run the risk of making the tenant mix on this destination parade unsustainable.

Above all else, it is absolutely critical for tenants to seek full representation from a chartered surveyor with specialist knowledge in this field: ‘market rent’ is a highly subjective term and not set in stone. There are many factors that can potentially affect value, so tenants should not go it alone. Chartered surveyors should promote themselves as being well placed to protect their clients’ best interest in these cases.

Jonathan Shuttleworth is director of professional services at Brecker Grossmith