Mapping for water in the desert

Innovative use of the latest camera technology is providing detailed, up-to-date visual data to ensure better decisions in water management

The desert city of Tucson, Arizona, has an average annual rainfall of just 30.4cm. But when the rain comes it is often in the form of torrential downpours, causing damaging floods across the city.

This is perhaps an ironic challenge for Tucson, and the broader Pima County area in which it is situated, given that it’s part of a much larger region working to ensure that there is and will continue to be enough water to go around in a time of unrelenting drought. Both of these distinct water management challenges – too dry and too wet – can be dealt with by thoughtful infrastructure decisions and land use.

Of course, when making such decisions, it helps to have precise mapping data on hand. That’s why Pima County officials are working with the Lincoln Institute’s Babbitt Center for Land and Water Policy and other partners to pilot the use of cutting-edge mapping and data analysis tools.

For the Babbitt Center, founded in 2017 to provide land-use research, education and innovation to communities throughout the Colorado River basin, the partnership represents an early step in exploring how such technology can be used to help integrate water and land-use management across the region. But the technology itself originated at the Conservation Innovation Center (CIC) of Maryland’s Chesapeake Conservancy, a key player in cleaning up the pollution-addled Chesapeake Bay.

To oversimplify a little: CIC has designed image-analysis algorithms that provide distinctly more granular image data of the earth’s surface. The technology has enabled a shift from a resolution that made it possible to observe and classify land in 30m2 chunks to a resolution that makes that possible at 1m2.

The details are of course a little more complicated, explains the conservancy’s director of conservation technology Jeffrey Allenby. He says the new technology addresses a historic challenge: the compromise between resolution and cost of image collection. Until relatively recently, you could get 30m2 data collected by satellite every couple of weeks or even days; or you could get more granular data collected by aeroplane, but at such a high cost that it was worth doing at most every few years, meaning it was less timely.

What’s changing, says Allenby, is both the camera technology and the nature of the satellites used to deploy it. Instead of launching a super-expensive satellite built to last for decades, newer companies with which CIC works are taking different approaches. Smaller, replaceable satellites, meant to last a couple of years before they burn off in the atmosphere, can be equipped with the latest camera technology. Deployed in a kind of network, they offer coverage of most of the planet, producing image data almost constantly.

Technology companies developed this model to respond to commercial and investor demand for the most recent information available: for instance, tracking the number of cars in major retail car parks can, in theory, be a valuable economic indicator, but land-use planners don’t need images quite that close to real time.

Allenby says the CIC began asking tech companies what they were doing with the two-week old imagery – less expensive to acquire than the real-time data, but far better than what was previously available. The resulting images are interpreted by computers that classify them by type: irrigated land, bedrock, grassland and so on. Doing that at a 30m2 level required a lot of compromise and imprecision; the 1m2 level is a different story.

The goal is to ‘model how water moves across a landscape’, as Allenby puts it, by combining the data with other resources, such as light detection and ranging (LiDAR) elevation data. Those are the essentials of land-use data projects, supplemented with ingredients such as reduction efficiencies or load rates from different land cover, depending on the project.

For the Chesapeake Bay, this can help manage water quality: if you can determine where water is concentrating and, say, taking on nitrogen, you can deduce the most cost-effective spot to plant trees or place a riparian buffer to reduce that nitrogen load. 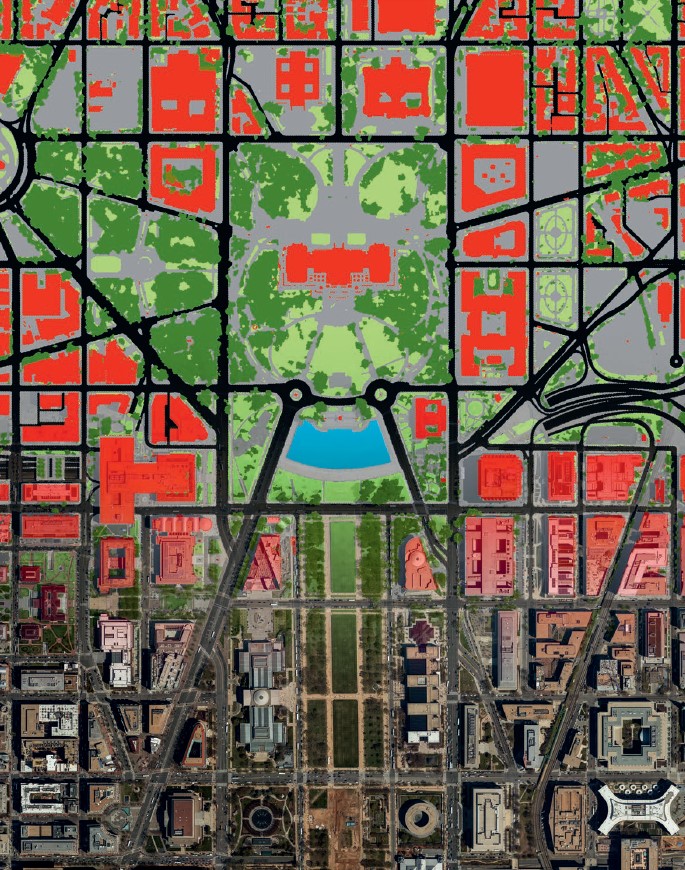 Figure 1: The Chesapeake Conservancy transforms aerial photographs to 1m resolution land cover data, classifying and quantifying landscape features for use in planning, prioritising and goal-tracking. This image shows the US Capitol in Washington, DC

In the Colorado River basin, the most urgent water management challenges at present are about quantity. Since water policy is largely hashed out at the local level, even though the underlying land-use issues have implications across multiple states, the Babbitt Center serves as a resource across a broad region. There’s currently a ‘heightened awareness’ of water management among municipal and county policy-makers, says Babbitt Center associate director Paula Randolph: ‘People are wanting to think about these issues and realising they don’t have enough information.’

That brings us back to Pima County. Although it lies outside the basin, it boasts two features that make it a good place to evaluate how precision mapping data might be used in the west: basin-like geography and proactive municipal leaders. When the manager of technology for the Pima Association of Governments saw Allenby speak about the benefits of his work on the eastern seaboard, he contacted the CIC to discuss possibilities for the opposite coast.

A year into the resulting project, several partners are on board, the group is mapping a 980,000ha area, and the open-source data is hosted on the Pima Regional Flood Control District website, where other people throughout the county are able to access and use it.

Broadly, this process has taken some effort, Randolph notes. Satellite data gathered in the west has different contours from the east-coast imagery to which Chesapeake’s sophisticated software was accustomed, and that has required some adjustment, teaching the software the difference between a southwestern sheet-rock roof and a front yard that both look like dirt to the machine. ‘We need human partners to fix that,’ she says. ‘We strive for management-quality decision-making data.’

Even as such refinements continue, there are already some early results in Pima County. More precise data about land cover is helping to identify areas that need flood mitigation. It has also been useful to identify hotspots where dangerous heat-island effects can occur, offering guidance for mitigation actions such as adding shade trees. These maps provide a more efficient visual showcase of water flow and land use than a field worker could.

Both Allenby and Randolph stress that this partnership is still in the early phases of exploring the potential uses and impacts of high-resolution map data. Randolph points out that while the Babbitt Center is working on this and another pilot project in the Denver area, the hope is that the results will contribute to a global conversation around experimentation in water management.

And Allenby suggests that the measures being devised by policy-makers, technologists and planners will ideally lead to a shift in more accurately evaluating the efficiency and impact of various land-use projects. This, he hopes, will lead to the most important outcome of all: ‘Making better decisions.’

Rob Walker is a journalist covering design, technology and other subjects

This article is © 2019 Lincoln Institute of Land Policy. From ‘Precision-Mapping for Water in the Desert’ by Rob Walker. The article has been edited and the layout changed from the original.

The Lincoln Institute has provided the CIC with occasional financial support for map- and data-related projects.