Since the lime revival of the 1980s, the benefits of using lime mortar for the repair of traditional buildings have become increasingly well understood. Compared with cement, lime is much more compatible with the surrounding fabric, especially as it permits the absorption and evaporation of moisture.

Most lime mortars used in the UK before 1919 tended to be either non-hydraulic or feebly hydraulic, and had a much higher lime content than most of those specified today. Evidence shows that mortars tended to be produced by slaking – combining quicklime with water to produce calcium hydroxide – or by mixing quicklime in damp sand, a process known as hot mixing. For decorative finishes, mortars tended to be lime putty-based, as they did in the early years of the lime revival.

Although hot mix and lime putty-based mortars are still frequently used, there appears to have been a trend towards using increasingly stronger mortars based on imported natural hydraulic limes (NHLs). This has partly been in an effort both to reduce the risk of premature failures in new lime work and to mitigate the perceived difficulties contractors have in mixing, applying and curing slower-setting traditional mortars.

However, despite the anxiety that often accompanies the use of traditional mortars, failures are almost always found to be a result of detailing issues, lack of maintenance, inherent dampness, inappropriate specification or poor-quality work. Any of these largely avoidable factors can, and usually will, cause the premature breakdown of lime work, and yet are often ignored, written off as another lime failure (see Figure 1). There is no reason why an appropriately specified and well-applied lime should ever fail on a well-detailed and regularly maintained building. 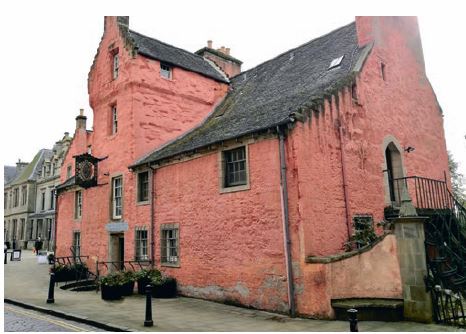 Figure 1: Abbot House, Dunfermline: detailing issues are causing staining and failures of the lime finishes beneath crow-steps, skew putts and chimney copes, while lower areas are affected by splashback from the pavement and de-icing salts. The appearance of the harling and limewash is also being compromised by a lack of ongoing maintenance

Detailing issues, particularly managing rainwater run-off and ground drainage, are possibly the biggest cause for early failure of external lime work. Managing rainwater, especially in a country now subject to greater annual rainfall and more frequent instances of extreme weather, is crucial to the long-term success of lime mortar.

Although one of the benefits of lime is its ability to allow masonry to breathe, areas subject to regular and concentrated wetting are much more prone to early failure. Ensuring that appropriately sized rainwater goods and well-detailed weathering features, such as wallheads, copes and cills, are in place is critical to minimising run-off over wall surfaces. This may require discreet adaptation to increase effectiveness, especially if details do not project far enough beyond the finished face of the new lime work. Another area vulnerable to failure is immediately above ground level: ideally, effective ground drainage should be in place to reduce dampness here, and consideration ought to be given to reducing splashback from hard surfaces.

Lack of regular maintenance, such as ensuring rainwater goods and ground drainage are running free and kept clear of debris, is another common cause of early failure in lime work. As with poor detailing, this will result in localised saturation leaving lime vulnerable. Frequent inspections to identify maintenance needs such as localised repointing or patching in high-risk areas will not only maintain the finished appearance but also reduce the chance of larger-scale repairs being required in future. It will also minimise the risk of penetrating dampness affecting substrates and interiors.

Inevitably, there will always be areas at greater risk, so increased attention is necessary to maintain the appearance of the finished work. Clients should be made aware of the need to plan regular maintenance, particularly in high-risk areas such as immediately below flush, crow-stepped gables or at ground level exposed to road de-icing salts, and budget for localised repair and reapplication.

The risk of failure also increases when lime is applied to masonry that is saturated. The walls of a building undergoing repair, where cement-based pointing or harling has been removed, will often remain damp for a considerable period. The risk of carrying out lime work in these circumstances is that the new work will be vulnerable to discolouration and the damaging effects of frost and salt recrystallisation as the substrate slowly dries from behind. Ideally, saturated masonry should be allowed to dry before application of lime work. If this is not possible, increased maintenance and localised repair should be planned to rectify areas affected (see Figure 2). 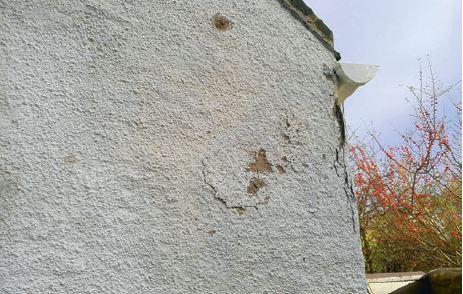 Figure 2: Localised staining and spalling of new lime work due to frost damage: despite repairs and detailing changes made to minimise the risk of future ingress through the skew copes above, the new, feebly hydraulic lime harling failed to carbonate or set in places due to inherent dampness, which left it vulnerable

Professionals should avoid the temptation to routinely re-use specifications written for other projects, as they are unlikely to be appropriate in every case. They should also avoid specifying overstrong lime mortars to reduce the risk of failure or make it easier for an inexperienced contractor; a well-detailed and appropriately maintained building should not require overspecification. Mortar specifications should be carefully designed and prepared to meet the requirements of the structure.

A key principle of lime mortar specification is ensuring that it is never stronger than the background or substrate to which it is applied. Porosity and capillarity are as important considerations as compressive strength – perhaps more so – and specifying too strong a mortar has the potential to trap moisture and restrict movement of salts in the underlying substrate. This leaves the masonry beneath at risk and can lead to damp-related issues internally as well as poor thermal performance.

In contrast, an appropriately specified lime mortar should, in normal conditions, allow transfer of moisture and salts more readily. It will also minimise the risk of damage to the surrounding fabric by being sacrificial should issues arise; that is to say it will be the lime work that fails, not the masonry, should it be exposed to salts or excessive moisture. A failure of lime work is often the first indication that other issues need addressing.

When specifying repair mortars, a useful starting point is having the original mortar analysed to determine the proportions and method of mixing, and the characteristics of lime and aggregate sources. However, the nature of the substrate and its condition and the exposure of the structure should also be considered. For example, the original mortar used to construct the wall of a now ruined property is unlikely to be appropriate to consolidate an exposed wallhead which is devoid of a roof and weathering details to protect it.

Similarly, the mortar required to repoint skew copes or re-bed chimney cans may need to be more robust than on less-exposed masonry beneath performing a different function. Appearance also matters, especially when patch-repairing finishes, and so a range of sample panels should be completed where possible to ensure a good visual match is achieved.

Clients should be made aware of the need to plan regular maintenance, particularly in high-risk areas, and should budget for periodic, localised repair and reapplication

The principle of good application requires the amount of mortar to be kept to a minimum by introducing pinning stones to fill voids and wider joints, and avoiding the temptation to apply overly thick coats of render, harling, plaster or limewash. It also requires an attention to detail to ensure that joints, renders, harls and limewashes are appropriately finished, cured and protected from exposure to sun, wind, rain and freezing conditions until the mortar has sufficiently set and carbonated (see Figures 3 and 4). 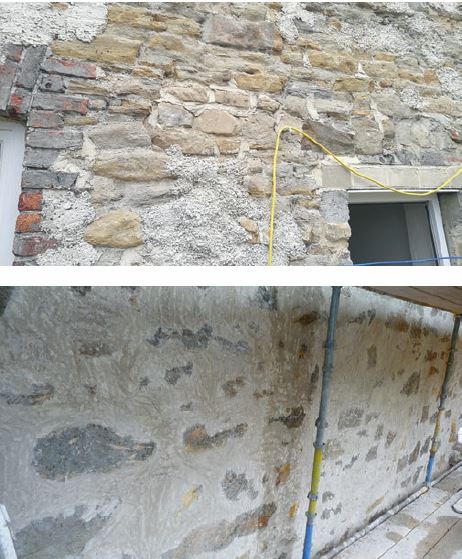 Figure 3 (top) and Figure 4 (above). Poor substrate preparation, with a failure to fill voids adequately and build outwards in thin coats can lead to an inconsistent finish and increased risk of new lime work failing prematurely

To gain full strength, most lime mortars require 2 simultaneous chemical reactions to take place. The first of these is hydration, a reaction of hydraulic compounds within the lime once it is mixed with water, and the second is carbonation, when the lime re-absorbs carbon dioxide from the atmosphere to convert it from calcium hydroxide to calcium carbonate. If new lime work is not properly protected or cured, this increases the risk of premature failure interrupting or disrupting these processes.

Engaging a contractor who has experience in the use of lime mortars is advisable. However, such is the availability of training courses and information, inexperienced contractors can be upskilled, providing they are prepared to carry out the work correctly. References should be followed up and qualifications checked before appointment, and sample panels completed before commencing the repairs. A competent contractor should understand the health and safety requirements of working with lime and be able to provide methods statements and risk assessments before works start.

The majority of lime failures can be avoided. To avoid the risk of premature failure when preparing specifications for lime work, even before considering an actual mix, understanding the condition of the building or structure and ensuring it is properly detailed is paramount. This, and anticipating regular maintenance of lime finishes – especially in areas already subject to longterm dampness or frequently affected by run-off – will not only maintain the appearance of the new work but will also minimise the need for larger-scale, costly repairs.

Despite ongoing debate on the appropriateness of specifying imported hydraulic limes, including NHLs, rather than using traditional lime mortars, there is a potential longer-term risk of damaging the fabric of buildings and structures when specifying overstrong mortars rather than making good poor detailing or attempting to pre-empt the need for future maintenance. In the same vein, it’s better to promote the development of skills by encouraging contractors to attend training on the appropriate preparation and use of lime mortars than specifying something that in the longer term may cause more problems.