Agricultural disputes: the business of land

Demand for arbitration is increasing – but so is the expense of the process. RICS is therefore offering a simplified service

The first issue of the RICS Land Journal this year included an article from the chair of the RICS Dispute Resolution Standards working group Philip Meade about rural arbitration. The article referred to the RICS president’s panel and Dispute Resolution Service and their interaction with Rural Arbrix, which is essentially a branch of the national club for arbitrators. It also mentioned Rural arbitration (1st edition), RICS guidance note. Rural arbitration is of interest to many stakeholders, including the Tenant Farmers Association, which would like to see the process run effectively for the benefit of the parties in dispute.

A famous legal cartoon from the 1700s (see Figure 1) depicts 2 lean individuals, the plaintiff and the defendant, pulling at either end of a cow. Presiding over this struggle is a rotund judge, clearly doing well from his profession, unlike the parties in dispute. The lawyer seems to be enjoying a similar diet to the judge; he is milking the cow, labelled ‘Litigation’, for all it is worth. The lesson, as relevant now as it was 3 centuries ago, is that litigation can be expensive and arduous, with the benefits often accruing to those other than the parties in dispute. 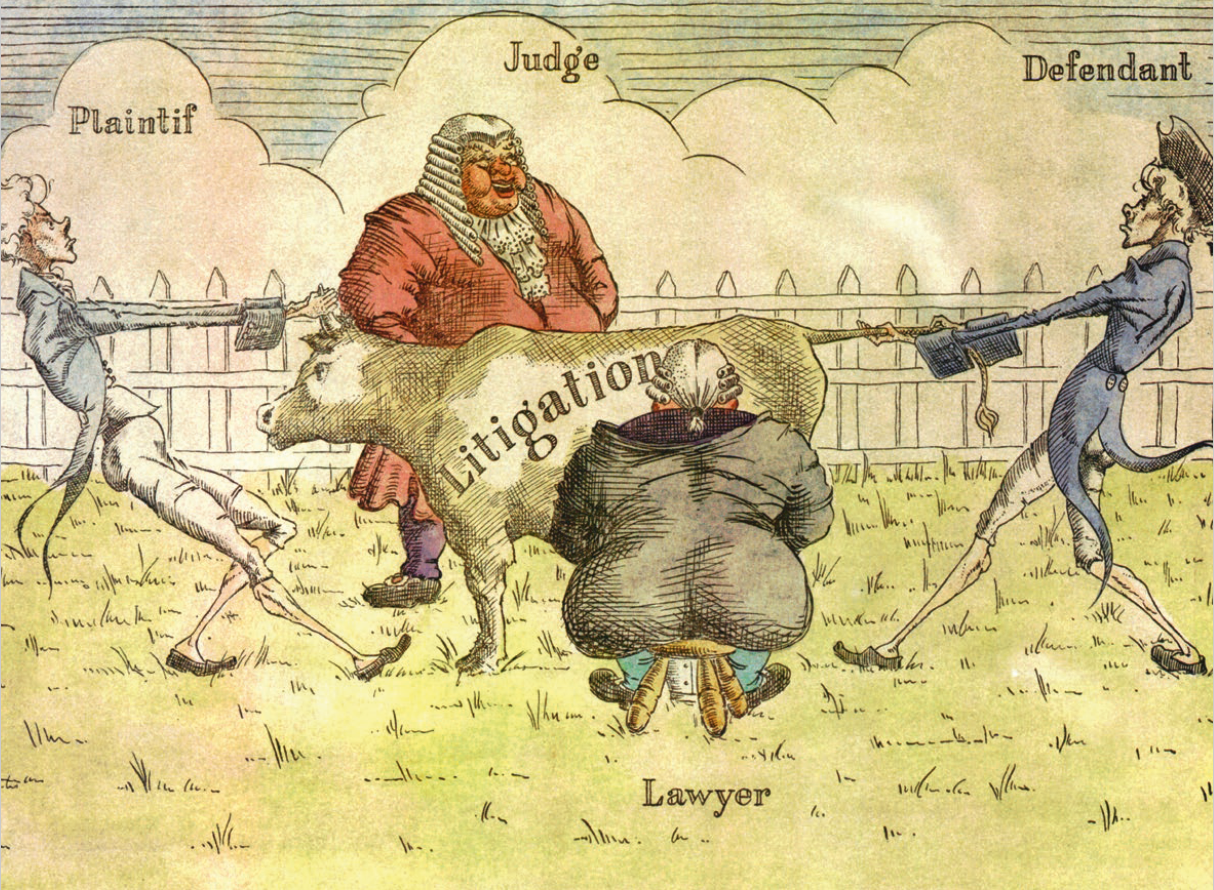 As an example, a recent arbitration on a relatively straightforward tenancy rent review under the Agricultural Holdings Act 1986 amassed costs of more than 4 times the rent for the holding. On another, more complicated rent review, dealing with the preliminary matters to be resolved ended with a bill well in excess of £150,000, the majority of which comprised the costs of a legal assessor appointed by the arbitrator.

Obviously, the easiest way to avoid these costs is to avoid arbitration. However, human nature means that, from time to time, dispute resolution is needed. No wonder many hanker after the days when parties to a dispute asked a distinguished member of the rural surveying profession to help them answer a question that their own advisers could not. This desire now manifests itself in the demand for more 3rd-party determination.

RICS has set out to deal with the issue of proportionality by developing the Simplified Arbitration Service. Although not universally favoured, this route has been successfully used. It does require discipline to ensure that the issues in dispute are brought into sharp focus and that there is no grandstanding or fishing on spurious points of law, nor attempts to settle old scores.

A determination to filter out the extraneous issues and get to the nub of a dispute is a skill that agents may need to relearn. Arbitration should not be used to advance pet theories or to pursue futile points of legal precedent – although, sadly, this now often appears to be the case.

RICS’ motto is ‘Est modus in rebus’: ‘There is measure in all things’. Understanding the measure of the difference between landlords and tenants in dispute about agricultural tenancies must be the starting point when considering how those disputes should be settled. If arbitration is to be used, should the simplified scheme be the preferred approach? The answer must be yes if it is reasonably straightforward.

If realistically, you decide a full-blown arbitration is required, does it really need leading lawyers or QCs to make the case for 1 side or another? Equally, where an arbitrator is required to provide an answer based on their professional judgement, do they really need to employ a legal assessor to work in parallel? One would hope they had the confidence to make their own determination, and leave it up to the parties to decide whether further action in the courts is necessary.

The Arbitration Act 1996 sets out the objective of arbitration early on, which is ‘to obtain the fair resolution of disputes by an impartial tribunal without unnecessary delay or expense’.

Although the legislation contains a further 109 sections, it is clear that the 4 overarching principles of fairness, impartiality, speed and value for money are to inform the way in which those further sections are interpreted.

For example, while section 33 requires arbitrators to give each party a reasonable opportunity to put their case and deal with their opponent’s, they should ensure that such opportunity does not fall foul of the 4 overarching principles, particularly value for money.

Professionals who are acting for parties in dispute should also know those 4 principles by heart to ensure that in all arbitration they assist the arbitrator to accomplish what is required.

George Dunn is chief executive of the Tenant Farmers Association

Download a complete “Agricultural disputes: the business of land” PDF