If building use, design and external environment don’t work together, they can cause excessive moisture and poor ventilation – all of which can lead to damp and mould growth

The English Housing Survey: Headline Report, 2017–18 noted there were 897,000 homes that had problems with damp across a range of tenures, as Figure 1 shows; almost 450,000 homes were affected by condensation and mould. 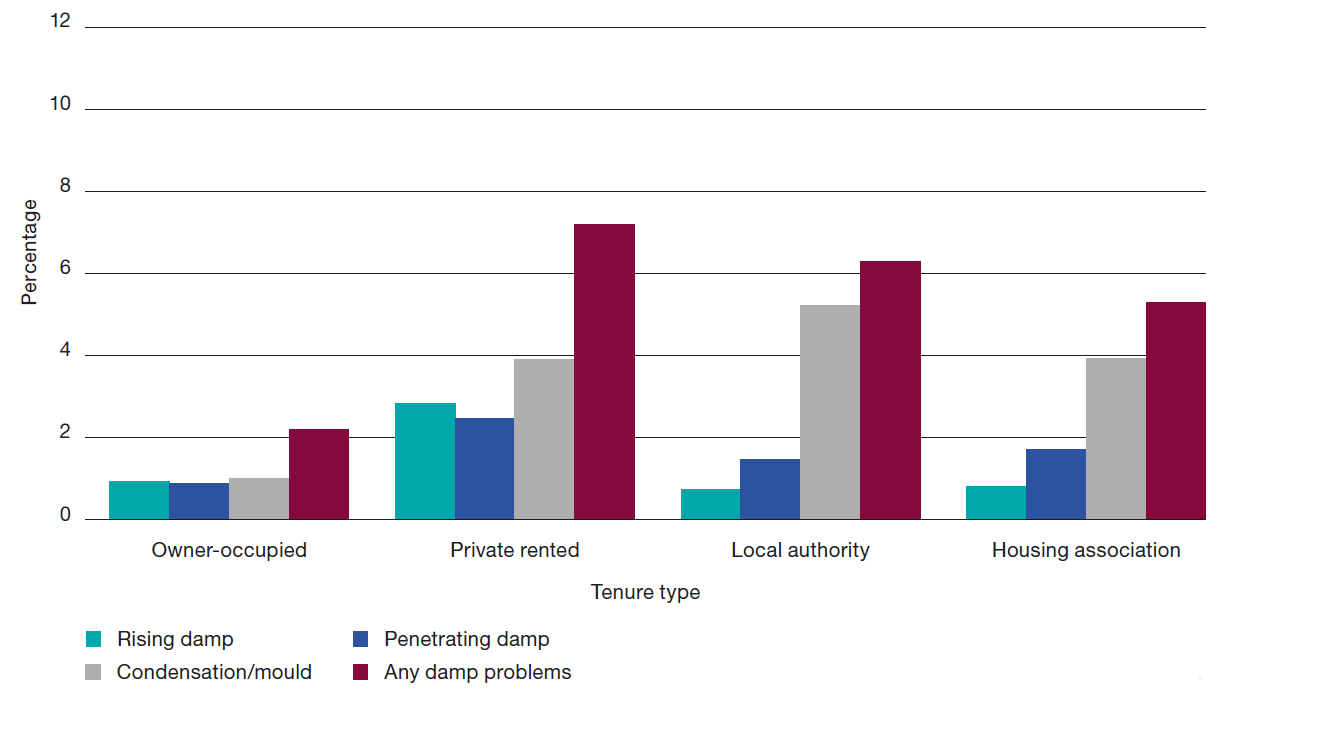 The report adds that people in around 746,000 homes are living in overcrowded conditions – and more occupants mean more moisture produced from, for example, cooking, washing and drying clothes. Conversely, around 9m homes are underoccupied, with occupants only heating the rooms they use. This means the moisture they produce will migrate to the cold rooms, increasing the risk of mould.

Around 49% of England’s housing stock – 15.7m dwellings – have cavity-wall insulation. Although this may sound like a positive measure, retrofitted cavity-wall insulation is an increasing cause of mould and damp. Some types absorb moisture created when rain penetrates the external layer of brickwork; I have been able to squeeze water out of certain insulation materials. There are local authorities that remove such insulation from their properties.

The survey also found that 85% of homes had full double-glazing, which, while keeping heat inside a home, may also retain excessive moisture and cause mould. When we combine over- or underoccupied homes with retrofitted fabric improvements, we can see why so many suffer from damp and mould.

The Housing Health and Safety Rating Scheme (HHSRS) was created by the Housing Act 2004 and identifies 29 major hazards mainly relating to mould and damp. Category 1 and 2 hazards are deemed to be prejudicial to health or even a statutory nuisance. The Homes (Fitness for Human Habitation) Act 2018 amends the Landlord and Tenant Act 1985 to include the HHSRS hazards in reworked and new sections 8–10. It gives tenants broad powers to bring actions against landlords where a property is deemed unfit for human habitation and where the occupier is not the cause.

A tenant can bring an action against a landlord if the property is affecting their health. The 2018 Act came into force on 20 March 2019. It will be onerous for landlords, who must prove beyond a reasonable doubt that they are not responsible for the causes of any damp and mould, and will need a pathological approach to measure whether the building itself can be eliminated from the dampness equation and leave only issues associated with occupation.

Where there is mould, analysis involves taking samples for testing in a laboratory to identify the species. It may just look like a black stain on a wall, but some types are much more detrimental to human health than others.

Many studies have shown the effects of different mould species on human health. The 2009 World Health Organization guidelines for indoor air quality: dampness and mould summarised various studies and found that ‘occupants of damp or mouldy buildings, both houses and public buildings, are at increased risk of respiratory symptoms, respiratory infections and exacerbation of asthma’. It added that ‘there is clinical evidence that exposure to mould and other dampness-related microbial agents increases the risks of rare conditions, such as hypersensitivity pneumonitis, allergic alveolitis, chronic rhinosinusitis and allergic fungal sinusitis’.

There are many types of dampness-related microbial agents, such as bacteria, endotoxins, microbial and other volatile organic compounds, which can all affect human health, but 2 of the main groupings are mycotoxins and glucans. Stachybotrys, cladosporium and aspergillus moulds, for example, can release mycotoxins, described as secondary metabolites; that is, they are produced by the fungi themselves. It is thought that these could be present in materials and settled dust from buildings that have suffered from damp or water damage. They can be particularly harmful to health and cause chronic upper respiratory tract conditions, cyanosis – oxygen starvation – asthma and rhinitis. Some studies have found mycotoxins to have adverse effects on human reproductive abilities and damage DNA, and they may also be potential carcinogens.

Other moulds contain biological elements called glucans. These are active compounds that compromise the immune system and can have significant effects on people with infections or who are suffering from cancer. Swedish and Danish studies, for example, have found that long-term exposure to the Aspergillus fumigatus mould, which contains glucans, is seriously damaging to health and causes localised infections, fatal diseases, allergic responses and – if inhaled – conidia growth in humans. Glucans can generally cause allergic alveolitis, hypersensitivity pneumonitis and inflammation, particularly in the upper respiratory tract, and suppress the immune system.

In addition to the effect these agents have on human health, when combined with pollutants such as cigarette smoke, they may lead to a cocktail of issues that can critically affect humans, particularly those with weak immune systems.

It is important to note there is some conjecture about the health effects of mould, despite numerous studies; however, the evidence seems to be more conclusive in the USA, and some successful lawsuits have been pursued there against building owners by occupiers who claim that their health has been adversely affected by mould.

The World Health Organization (WHO) report states that while only a few studies show the effect of interventions, these demonstrate that the remediation of dampness can reduce the severity of adverse health outcomes. Performing these measures correctly is clearly crucial. For example, we know that if assisted drying does not start within 24 hours after a flood then mould can be very difficult to eradicate. But how do you know that a property is fully dry?

Measuring and monitoring the property with a best guess only increases the risk of residual moisture. When the property is later heated, residual moisture will be drawn out of the building fabric and deposit on any cold surface at the dew point. Then condensate will form and mould will inexorably grow. During summer months when damp properties dry out, mould also dries and its spores may become airborne. These are easily inhaled and then gain direct access to the human bloodstream, which is why lung-related illness is the most common impact of mould.

Property professionals must understand the potential link between building failure and an occupant’s health. The mere use of a moisture meter may only signal that a damp issue exists; further investigation is needed to understand its cause. It should prompt questions into, for example, the building’s age, construction, heating and ventilation levels.

Only once we understand the whole picture of a property and its problems should we consider a mycology examination into visual mould and spores in the air. If there are no such signs of damp, then it is unlikely to affect an occupant’s health. However, ways must be found to eradicate the mould and prevent it from becoming airborne. Detailed monitoring will tell us whether the property is underheated, where the dew point is reached, what cold surfaces exist, the effect of cavity-wall insulation and so on.

The WHO report emphasises the importance of well-designed, well-constructed and well-maintained building envelopes in preventing and controlling excessive moisture and microbial growth. It suggests that moisture management depends on proper temperature and ventilation control to avoid excessive humidity, condensation on surfaces and excess moisture in materials.

There is a growing trend for occupiers in social and private rented accommodation to severely underheat their homes. To improve their health, we need a full understanding of the dominant factors contributing to mould and damp in the home; for example, is it a result of use and occupation, building design, building defects and construction, or a combination of these? Do practitioners investigate the true causes and sources of any damp and mould, or merely stop after highlighting the symptoms?

Without an holistic approach to understanding these issues, the source of a damp problem will go undiagnosed. If the symptom of a problem is treated in isolation, then the true cause will eventually reappear – as will its effect on human health.

Energy efficiency in construction and retrofitting insulation is part of the answer. However, additional energy-producing technologies in homes will help to reduce or eliminate fuel bills in the future, providing occupiers with the confidence to heat their homes adequately. This will go a long way to improving health.

Michael Parrett is a building pathologist, chartered building surveyor and founder of Michael Parrett Associates. He is an eminent fellow of RICS and the lead author on the Damp section of isurv