In June 2017, the fire at Grenfell Tower in west London resulted in a significant loss of life. In response, the government commissioned an independent review of the Building Regulations and fire safety from Dame Judith Hackitt, who published her final report last May.

The Hackitt Review drew on experience across the industry to determine where exceptional events such as this fire could lead to the risk of fatalities on a large scale. Dame Judith’s report made 53 key recommendations, which included setting demanding roles and responsibilities for duty-holders, more rigorous enforcement powers and stronger control over changes to standards. The building surveying profession must help to ensure that these recommendations are strictly implemented.

In November, the government announced that it would ban combustible cladding materials for all new residential buildings; that is, places where people sleep, whether they are apartments, hospitals, hotels, care homes or student accommodation. It also sought to speed up the replacement of cladding made from unsafe aluminium composite material (ACM), as used at Grenfell Tower.

The necessary change in legislation was made in the Building (Amendment) Regulations 2018, which became legally binding on 21 December. The ban is implemented by amended regulation 7, which deals with materials and the quality of work, and applies to all elements used in external wall construction; it is now mandatory, rather than simply being guidance.

The legislation covers new construction as well as extensive refurbishment projects, that is those classed as major alteration.

It is at present unlikely that the ban on combustible materials will apply retrospectively to existing buildings; however, more clarification is expected as this issue goes to press.

When reviewing any property with respect to fire, whether existing or new build, property owners are advised to identify the level of risk in accordance with Approved Document B, which provides specific requirements and guidance to enable compliance with the Building Regulations. Achieving this on site is essential to ensure the preservation of life.

In the first instance, it is important to distinguish between the diverse types of construction and the respective category of fire risk, which in broad terms may be described as follows:

The combustibility of ACM with a polyethylene core was found to be one of the main causes of the rapid spread of fire at Grenfell Tower, together with combustible insulation behind the ACM, the lack of proper cavity barriers and unsatisfactory installation.

On top of the combustible materials, there are other hazards to consider, including droplets from melting plastics, toxic fumes and asphyxiants given off by burning insulation and other plastics found in a modern cladding system. The combustibility of ACM is now well known, but it is just one of several combustible cladding materials used in rainscreen cladding, which also include structural insulated panel (SIP) backing walls.

A key feature of rainscreen cladding is the void between a wall construction and the rear of the cladding panel. Strict rules govern the way that the internal walls of a building must be constructed to contain fire and assist safe evacuation, but the same is not always true of the external walls, where there are few requirements to prevent the spread of flame and heat from outside. Devices and features in this void, such as vapour membranes and bathroom or kitchen vents, can transmit fire and smoke from the cladding system into occupied spaces. These, together with uPVC windows, certain paint finishes and timber balconies, can all increase the fire load.

On the basis that the external wall has been designed in accordance with Approved Document B 2018, it is important to check installation of cavity barriers, proper fire compartmentation and service penetrations, as well as ensuring the combustible cladding is effective by undertaking intrusive inspections.

This is particularly relevant when rainscreen cladding has been identified on a property. Several recent inspections have found cavity barriers and poor penetration detailing in rainscreen systems to be a significant concern, and intrusive inspections must be carried out to confirm compliant installation.

Approved Document B clause 12, as amended 2018, states how the external wall must be designed and installed so that its performance is assured in the event of a fire. Cavity barriers perform their fire safety function only once, but they must be totally effective on that 1 occasion. It cannot be overstated that these preventative measures are intended to preserve life, rather than the asset.

Intrusive inspections of many properties by CBRE’s facade team have found a catalogue of defective installations and materials, all of which can potentially put lives at risk. Such defects are due to a variety of causes from poor design and incorrect use of materials to inconsistent installation of cavity barriers, insulation and cladding, as well as substandard support substructures.

Apart from combustible cladding materials, the construction behind rainscreen cladding is largely unseen and can be a huge concern in terms of fire risk. The void or cavity formed in rainscreen systems is susceptible to propagation of fire by the chimney effect. It is therefore imperative that effective measures be taken to contain the spread of fire in the cavity: defective installation can mean that closers will not form a compartment in the event of a fire, and their ability to contain it is then completely lost. Cavity barriers must be fitted so they remain in place securely throughout the life of the construction while allowing ventilation of the cavity. However, they must close off the cavity as it intumesces when exposed to fire, thus starving the space of oxygen.

If such barriers are not secured properly, they will detach, sag or deform, rendering them incapable of performing their function. Following 1 intrusive inspection, the maximum allowable gap for the intumescent strip on a mineral wool cavity barrier is marked clearly on the product as being limited to 25mm. However, the cavity barrier air gaps were found to be up to 80mm, so would be unable to close off the cavity in the event of a fire. The photo below shows indiscriminate installation of cavity barriers that are totally ineffective in the event of a fire. 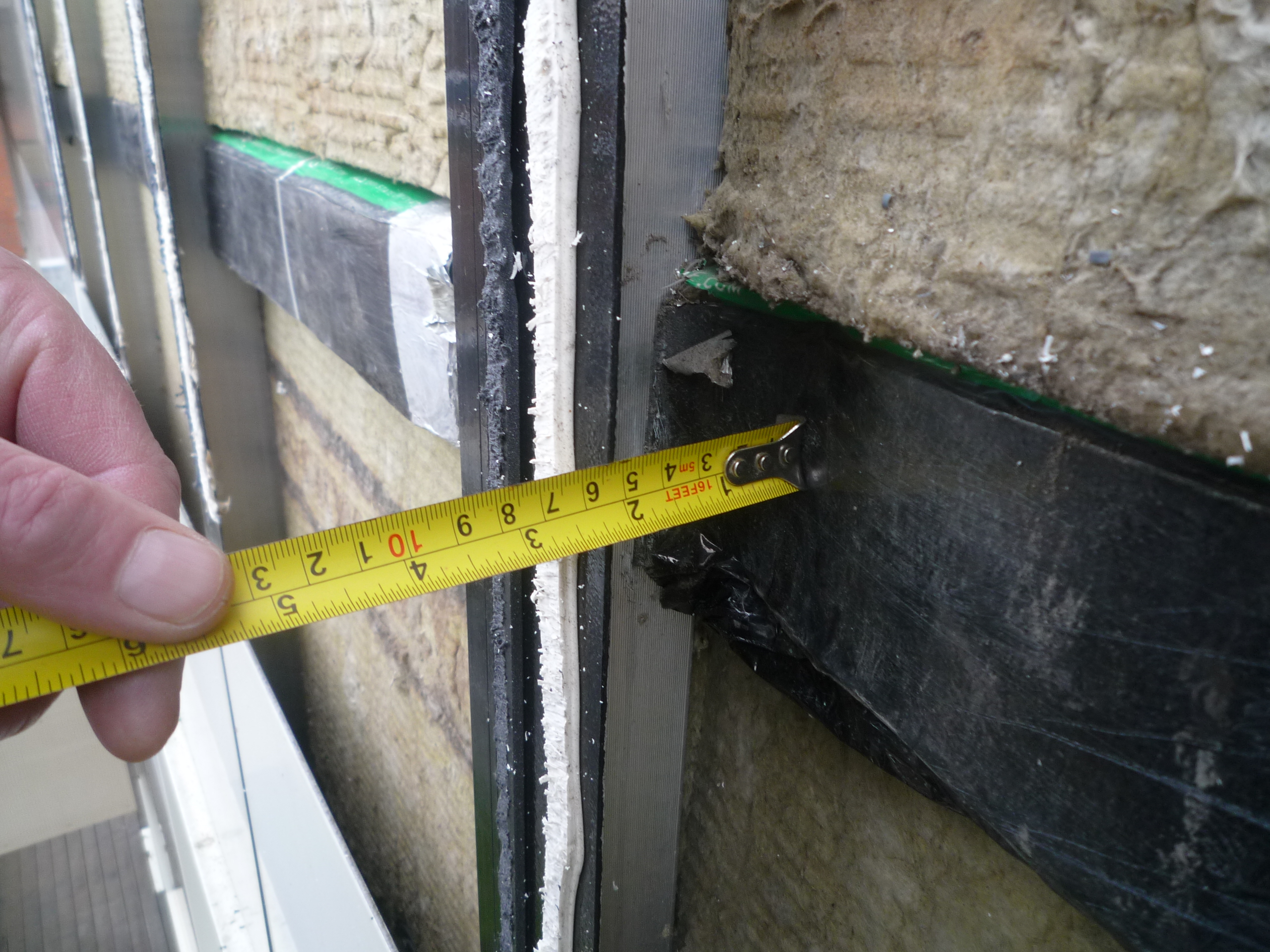 Prevention of fire passing through the rainscreen at services penetrations is also a major concern. Apart from fire, lethal toxic fumes and asphyxiants can pass through small voids and openings in cladding systems. However, proprietary products are available to deal with this potentially serious fire safety risk.

The key to successful compliance with the amended Building Regulations is correct product specification along with intrusive inspections to confirm that materials are fitted as specified.