Modifications to chimneys and flues must be careful to ensure they maintain their load-bearing strength and performance. This, the third in our series on common site issues, looks at how to identify and remedy defects

Chimneys stacks have been common on the roofscape since before the Industrial Revolution, and were a feature of many 17th-century manor houses for instance. Historically, they have played a key part in running a house: fires were used for heating and cooking, with the chimney providing the natural way for the smoke to leave the property, and they continue to serve an important function in modern dwellings.

Regardless of whether chimneys are ornate or plain, they are exposed to the elements and the full force of any adverse weather such as rain, frost or snow. They are also exposed to intense heating and cooling, condensation, and chemical attack from open fires or gas or oil appliances.

Work to chimneys can vary from simple pointing and maintenance to rebuilds and removals, and anything beyond maintenance almost always requires a building control application. This would also require service of a party structure notice under the Party Wall (etc.) Act 1996 before work starts.

Chimneys are exposed to the full force of any adverse weather such as rain, frost or snow

Any work that involves lining the chimney, increasing or reducing its height or removing it – or indeed installing one for the first time – will require approval under the Building Regulations, must meet the criteria of Approved Documents A on structure, B on fire safety and J on heat-producing appliances, and will need an agreement under the 1996 Act.

Defects in chimneys are common as a result of unsupervised or poorly conceived works. Typically, building control surveyors often get involved in cases where stacks are being removed, which often occurs in older properties where they were built using relatively soft, porous clay bricks and lime mortar (see Built Environment Journal February/March, pp.30–33).

In any case where the chimney is being removed, proper consideration should be given to the existing structure and the neighbouring property.

The traditional method for removal is to support the remaining chimney stack in the roof space with triangular gallows brackets made of steel bolted to the wall beneath it. The security of stack and brackets alike largely depends on the quality of the brickwork underneath; if this is very soft or loose, it may not be possible to obtain a secure fixing for the bolts. Another consideration is whether the chimney also supports a neighbouring one. A more secure alternative to brackets is a steel L-section beam that sits on the load-bearing walls of the house and supports the stack above. 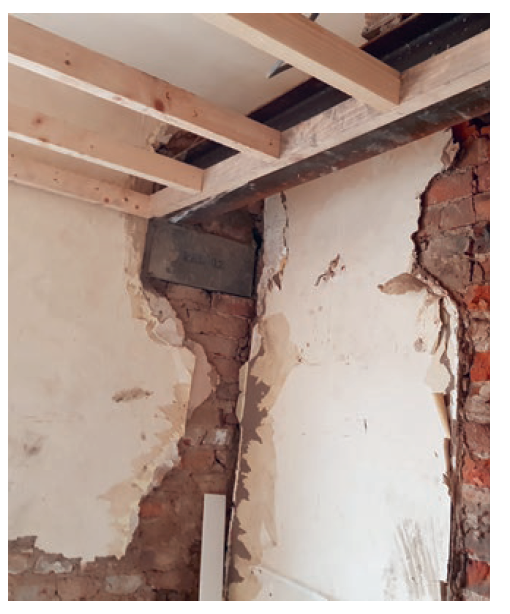 Figure 1: Example of L-section beam in place and alternative angle of defect

Any project that requires the full or partial removal of a chimney needs to be supported by the provision of structural calculations. Figure 1 shows the ground floor of a property where the chimney has been removed and an L-section beam installed. As a result of the chimney’s removal the rear lining is visible, and the party wall separating the chimney from that of the neighbouring property is exposed. There are holes in the rear of the stack caused by the partial demolition, and these will need rectification before the wall is made good and the ceiling reinstated.

The structural repairs are visible, and on the left of Figure 1 is the steel beam on padstones that supports the remaining redundant stack, which also acts as a buttress to the existing party wall. 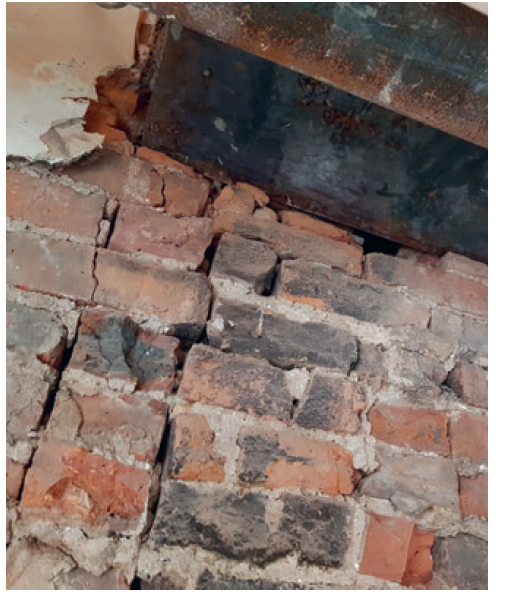 These padstones need resetting to ensure the beam is adequately supported. Remedial works will likewise be required to make good the party wall where it was damaged during the stack removal, as there is a possibility of carbon monoxide or dioxide leaking from the neighbour’s flue should their fire still be in use (see Figure 2).

All poor brickwork should be replaced and repointed, ensuring that the neighbouring chimney is not adversely affected, and that as a result of the works the function complies with diagram 20 of Approved Document J Combustible appliances and fuel storage systems (see Figure 3), and the agreement in place under the 1996 Act.

A smoke test should be carried out by a Gas Safe-registered engineer on the neighbour’s flue to check for any leakage. Figure 2 also shows that a new ceiling will be formed to ensure adequate fire protection is provided for 30 minutes to the structural supports from the room below.

It should be noted that removal works should not use the following methods.

Dampness around existing chimneys is one of the most common problems. This could be a result of poor maintenance, or damage to or inadequate flashing to the stack. Such defects are often not noticed until further works are being carried out, and any remedial works should be undertaken at this point to remedy the defect as part of the wider scope of works.

All chimneys should have a capping in place with a drip that will shed water clear of the brickwork below, a flashing to prevent rain passing between the chimney and adjacent roof covering, and a damp-proof course in the chimney at the lowest intersection between roof and chimney to protect the masonry.

Any repairs need to comply with Approved Documents A and C and BS EN 1443: 2003, as well as following the BRE Good Repair Guide 15 of 1998. Assessment of any chimney works starts at the plan-checking process, with the proposed height needing to fulfil the criteria of Approved Document A section 2D diagram 20 (see Figure 1), and those of Approved Document J for positioning and size. Site inspections give the surveyor the opportunity to review compliance and identify any potential problems.

For APC candidates this process and the assessment of the design, risks and remedial work count as evidence towards the following competencies.

While carrying out the inspection on the chimney, the surveyor should also be able to identify the types of defect discussed above and provide appropriate measurements and photographs in site reports.

The detail should be reviewed against the approved plans or submitted specification appropriately using Approved Document A, BRE Good Repair Guide 15 and other guidance such as the NHBC technical standards to determine whether the structure is stable and the chimney construction acceptable.

From there, the surveyor would be able to take appropriate action, such as advising on remedial measures or the need for further review by a structural engineer. Where an APC candidate is identifying and resolving such site defects, it should be possible to record their general experience under at least Level 2, and potentially Level 3 where advice has been given for the competency of Building control inspections.