Choosing the right detection technology is essential if you are to avoid the twin risks of fire and false alarms. Simon Sandland-Taylor details how you can navigate the various options

When selecting detectors for a fire alarm system, you must give equal consideration to optimising fire detection and minimising the occurrence of false alarms.

The desirability of the former is often weighed against the disadvantages of the latter, although some critics maintain that the number, frequency and potential disruption of false alarms bring the value of fire detection itself into question. In actual fact, most false alarms are down to poor system design and incorrect detector selection and the risk can be significantly reduced by careful design and advances in technology, as this article shows.

Fire detectors are selected according to the nature of the area where their use is planned, and any fire risk associated with it. Quite often, this can result in different technologies being used to ensure fire is detected while false alarms are avoided.

Detectors themselves are designed to identify one or more of fire’s four characteristics: smoke, heat, combustion gas – such as carbon monoxide (CO) – and infrared or ultraviolet radiation.

In some fire detection and alarm systems, an alarm signal is initiated when one of these characteristics reaches a predetermined threshold. In other situations, a signal may be initiated, instead or in addition, when the rate at which this characteristic changes is indicative of a fire.

In the case of point detectors, smoke, heat, gas or radiation are monitored at a defined spot in the protected area, whereas line detectors recognise these along a defined line in that space.

Smoke detection is the most common technology in automatic fire detection systems, and can take the following forms:

Heat detectors take the form of either point or line detectors, and may be designed to respond when a fixed temperature is reached. The heat detector may also include a sensor that responds to the rate of rise of temperature. Combustion gas detectors in turn are point detectors that respond to one or more of the gases, for example carbon monoxide, that are produced when combustion is incomplete due to a restricted amount of oxygen.

Flame detectors meanwhile detect the infrared or ultraviolet radiation that is emitted by flame, or both. Both kinds use radiation-sensitive cells that identify the fire directly or through built-in lenses or reflectors.

Some detectors contain more than one sensor, each of which responds to a different characteristic of fire. Such multi-sensor devices can be used to enhance detection of fire and reduce the risk of certain categories of false alarm.

Video is another means of detection, which monitors the protected area and analyses images electronically to identify the presence of smoke or flames from changes in the camera’s field of view. 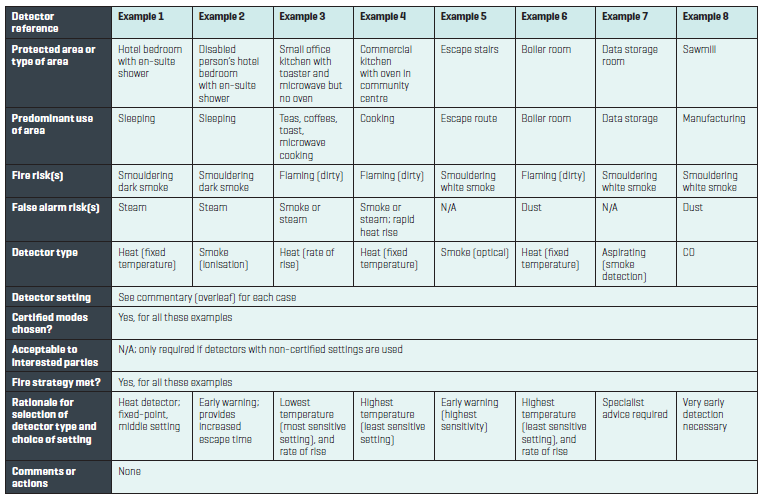 The choice of fire detector types should, ideally, be made early in the design stage to support the fire safety strategy. Sometimes this choice is revisited and modified as the building design evolves, or during installation and commissioning, or during periodic maintenance thereafter. Such modifications are not always clearly documented, however; neither is the rationale behind their selection at the design stage or later.

It is absolutely essential that the reasoning behind the selection and configuration of the detectors is clearly documented, and likewise the justification for any changes to them throughout the lifetime of a building, in order to verify continued suitability.

To help the selection and verification of detection, Annex E was introduced in BS 5839 Fire detection and fire alarm systems for buildings, Part 1: 2017. Entitled 'Selection and application of fire detectors', this informative annex provides a methodology for selecting and recording the type and sensitivity of and settings for detectors, taking into account the anticipated risk of fires and false alarms. 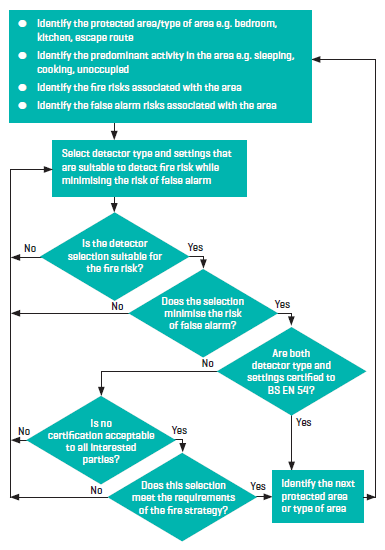 One way to ensure the correct detection technology is selected is to complete a template form for each detector. A simplified version using a number of examples is provided in Table 1, with accompanying guidance in Figure 1 and Tables 2 and 3.

The factors set out in the left-hand column of Table 1 should all be considered, so that the completed version can be used as a live document to help designers, commissioning engineers and service or maintenance technicians select detection and justify those choices and, where appropriate, substantiate any subsequent changes either in detector type or setting.

Figure 1 and Tables 2 and 3 on typical fire and false alarm risks can also inform the completion of the selection table.

In a category L2 or L3 system for an hotel (see Building Control Journal June/July, pp.12-13 for details of categories), it is acceptable to install heat detectors in bedrooms; the objective in such a case is to warn all occupants before the integrity of the bedroom door is threatened by fire.

Some hotel chains, however, prefer to have smoke detection fitted to give them warning that a guest is smoking in a bedroom, as this enables them to take prompt action. Such smoke detection provision would inevitably increase the risk of false alarms, so it is not a decision to be taken lightly; however, a compromise might be to provide a combined optical–heat detector. The rationale for this kind of decision must be clearly documented in the selection table.

In this example, the hotel bedroom has smoke detection to give the earliest possible warning for disabled persons, and thereby afford them more time to escape in the event of a fire. Ionisation smoke detection is chosen in preference to optical technology to reduce the risk of false alarms from steam produced by the shower or a kettle.

3. Small kitchen with toaster and microwave

This is an example of a typical food preparation area provided in many workplaces. In this scenario, ionisation or optical smoke detection is a not recommended due to the risk of false alarms from the production of steam and smoke particulates. A low fixed-temperature heat detector with a setting to pick up a sudden rate of rise would be most desirable in this situation.

This particular scenario has the potential for three false alarm risks: smoke and steam production as well as rapid thermal change caused by opening oven doors. A heat detector with the highest setting – albeit the lowest sensitivity – would strike an ideal balance between fire detection and false alarm reduction.

Maintaining the integrity of protected stairs is essential to ensure a safe means of escape. As these are fire-sterile areas, the risk of fire in a stair enclosure should be very low. However, consideration should be given to the possibility of smoke entering the protected stairway. Either ionisation or optical smoke detectors would provide an early warning in this event, with the latter being the preferred choice as they would detect any smoke that might obscure people’s vision and make escape more difficult.

Smoke detection would not be suitable due to the presence of dust and dirt. Room temperatures are likely to be relatively high, and could fluctuate from time to time.

Loss of a data storage room or suite could devastate a business, and therefore rapid detection of fire is critical in such a situation. Aspirating smoke detection is up to 100 times more sensitive than traditional point smoke detectors, and can identify smoke even before it is visible to the human eye. Specialist advice should be sought for such an application, however.

In this scenario, a carbon monoxide detector would be most suitable to prevent smouldering in the early stages from developing into a major life-threatening fire. In such an environment, a smoke or heat detector would only be activated once a significant fire had taken hold.