In the first part of a 2-part article, Joe Martin looks at the different methods for using BCIS data to produce an order of cost estimate for building costs at the earliest stage of a project

Cost advice provided at the outset of a project is key to its success. However, this is often based on a schedule of accommodation alone, from which a block or wire design is generated so there is sufficient quantification to produce an order of cost estimate. So even at this early stage, an elemental order of cost estimate can be used to advise the design team on the most cost-efficient shape and layout for the building.

The need to produce a robust budget that reflects the client’s brief and informs the design was highlighted in Riva Properties Ltd & Ors v Foster + Partners Ltd [2017] EWHC 2574 (TCC). Here, the client successfully sued the designer for abortive fees on a hotel project that did not proceed as the design could not have been realised on budget. The judge noted that the designers should 'confirm the client’s key requirements and constraints' and that 'the client’s budget for the project is plainly a constraint'.

The RICS New Rules of Measurement 1 (NRM1), Order of Cost Estimating and Cost Planning for Capital Works, states that 'The purpose of an order of cost estimate is to establish if a proposed building project is affordable and, if [so], to establish a realistic cost limit for the project. The cost limit is the maximum expenditure that the employer is prepared to make in relation to the completed building project, which will be managed by the project team (i.e. authorised budget)'. It also states that an elemental cost plan is 'the critical breakdown of the cost limit for the building(s) into cost targets for each element of the building(s)'.

The RICS Cost analysis and benchmarking guidance note states that an elemental cost plan also provides a frame of reference for developing a project’s design and maintaining cost control. It is normally produced for the initial appraisal of a project.

The order of cost estimate is based on benchmark data with general assumptions about quality and complexity. In developing a cost plan, these assumptions will be replaced by prices for the designed elements.

NRM1 sets out 3 estimating methods for an order of cost estimate:

The first 2 of these are detailed below, and the third will be covered in the next part of this article.

For an estimate using this method, an estimate of the floor area that matches the definition of floor area used in the cost data is also needed. BCIS uses cost per square metre (£/m2) of gross internal floor area (GIFA).

NRM1 states that the major component of the estimate is the cost of construction works, including contractor’s preliminaries, overheads and profit. The others are:

The BCIS average prices section provides cost per square metre for most building types, which can be used to establish the construction cost of the building, the core component of the estimate (see the BCIS guide to average prices).

The section provides a statistical analysis of the costs of projects, which can be adjusted for location and date. Care should be taken when selecting an appropriate figure; the factors to consider are the following.

The BCIS statistics for a building type include mean, median, upper and lower quartiles, deciles and overall range. While an average figure is provided by the mean or median, it may be more appropriate to pick a cost within the range to reflect the project’s likely position in the distribution of costs for a building type.

Table 1 gives an illustration, setting out the cost per square metre of GIFA for a new-build primary school, including preliminaries, based on a Tender Price Index (TPI) of 316 and UK mean location (index 100), using data up to the second quarter of 2018.

The chosen cost per square metre enables the cost of the building to be derived, though estimates will need to be made for the additional costs identified in NRM1. Most projects on the BCIS database are for firm-price contracts, so an allowance is needed if it is felt that inflation over the contract period will vary significantly from the average of projects in the sample.

In the BCIS online service, there is a template for early cost advice that sets out an order of cost estimate linked to the BCIS data; Table 2 provides an example. 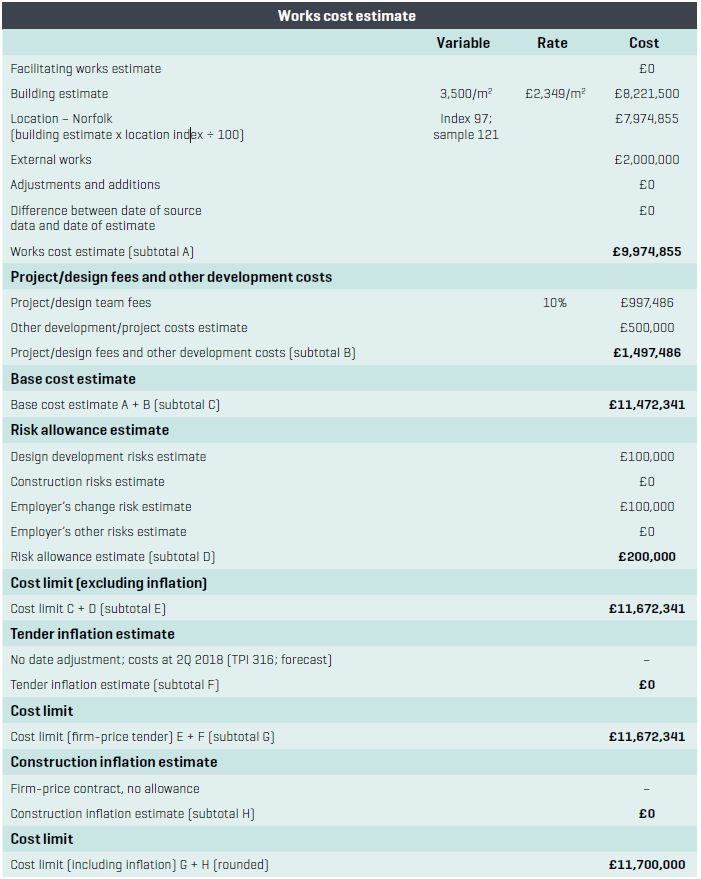 Sometimes, for example where a client is developing the requirements for a programme of work, they may not have defined the projects in terms of buildings but as functional units, for instance the number of places in a school. These units need to be clearly defined and should match those that are used in the cost information.

The cost estimate is built up in the same way as for the floor area method, but the works cost will be derived by multiplying a suitable cost per functional unit by the number of such units.

The functional units used by BCIS are defined in Appendix 2: Recommended Functional Units of the Standard Form of Cost Analysis (see www.rics.org/bcisesfca).

The processes and measurement rules set out in NRM1 and the cost data supplied by BCIS, applied by an experienced quantity surveyor, provide a means of calculating a robust initial estimate, and are the basis for strong cost control as a project design develops.

The second part of this article will discuss the elemental method for establishing an order of cost estimate and conceptual cost estimating.