Fire safety guidance is a significant factor in the internal arrangement of apartments in the UK. In general, either the distance from the furthest point in the apartment to the entrance door is kept very short, or a protected entrance hall connects all rooms to the apartment entrance.

In recent years an open-plan approach has become desirable, with bedrooms being accessed directly from a combined living and kitchen space. To support this, BS 9991: 2011 Fire safety in the design, management and use of residential buildings – Code of practice, included guidance for open-plan apartments.

This was revised with the publication of BS 9991: 2015 to align better with earlier research published in the NHBC Foundation report NF19, Open flat layouts: assessing life safety in the event of fire.

NF19 details research carried out by the Building Research Establishment (BRE) on behalf of the NHBC Foundation, which compares the risk to life in open-plan apartments to that in designs of a similar scale complying with Approved Document B.

This assessment was undertaken using BRE’s cross-industry standard process (CRISP) modelling software, which applies probability distributions to factors including the location of the fire, such as bedroom, kitchen or living area; the number of doors and windows and whether they are open or closed; and the type and location of people in the model, according to age, gender and degree of dependence on others, for instance. The effect on items such as detectors, sprinklers and the escaping occupants is then determined based on the geometry. As the occupants travel in the simulation, the accumulated fractional effective dose (FED) – a measure of the harmful gases they have inhaled – is recorded, and then scenarios are compared to assess the risk to life.

NF19 found that the introduction of sprinkler protection to BS 9251: 2014, Fire sprinkler systems for domestic and residential occupancies – Code of practice, together with category LD1 enhanced detection, in accordance with BS 5839–6: 2013 Fire detection and fire alarm systems for buildings – Part 6: Code of practice for the design, installation, commissioning and maintenance of fire detection and fire alarm systems in domestic premises, improved levels of safety in open-plan apartments, compared to designs complying with Approved Document B that featured a protected entrance hall and category LD3 detection but where the entrance hall arrangements do not have suppression, for the scenarios modelled.

The open-plan variations of these varied according to case:

When the NF19 research was incorporated into the BS 9991: 2011 guidance, the decision was originally taken not to require the enclosure of kitchens in apartments measuring up to 10m x 8m on plan, although this decision was reversed in the 2015 version.

In addition, both the 2015 and 2011 versions of BS 9991 allow variations to the sprinkler system under BS 9251, subject to the agreement of the authority having jurisdiction. As such, it is common for concealed heads to be provided – a significant variation from the original study, which used quick-response heads.

The guidance in BS 9991: 2015 is restricted to the scope of the original NF19 research. This article therefore provides a summary of an extended study that examined the importance of enclosing kitchens in larger apartments or using concealed heads, in the context of risk to life in sprinkler-protected open-plan apartments. The purpose of this was to widen the design variations permitted for open-plan apartments beyond those given in BS 9991: 2015.

In 2014, Trenton Fire worked with BRE to undertake a numerical study of the effect of adopting unenclosed kitchens and concealed heads in larger open-plan apartments. The extended study was based on case 3 of the NHBC’s work, measuring 16m x 12m on plan and having three bedrooms. Unlike the original study, however, the wall separating the kitchen area from the living room was removed, meaning that the bedrooms were accessed directly from a living area with an unenclosed kitchen.

A further variation was also considered, with concealed sprinkler heads introduced and modelled using an increased response time index (RTI) to reflect delayed activation due to the presence of a cover plate.

RTI values for concealed heads were not available, though previous studies by BRE, including its report Effectiveness of sprinklers in residential premises – an evaluation of concealed and recessed pattern sprinkler products, have investigated the performance of such sprinkler heads in domestic contexts. In these tests, the increase in activation time of the concealed head was found to be less than 10%, relative to a standard pendant sprinkler head.

The RTI values of the standard pendant test used in the BRE experiments were not documented, so a conservative estimate for the base RTI value was used to calculate that of a concealed head. The activation time for the latter was benchmarked to a special response sprinkler head with an RTI of 80(ms)1/2.

The response time of this head was calculated using a method described in the SFPE Handbook of Fire Protection Engineering, adding 10% and then back-calculating a concealed head’s RTI. An RTI value of 115(ms)1/2 was derived from this assessment. The value was then used in the extended CRISP study, following the principles and processes used in the original NF19 study, with the only significant variations being the geometry and RTI of the sprinkler heads.

The purpose of the study was to measure how the risk to life, in terms of average FED for each fire, differed between an Approved Document B-compliant design and that of the large open-plan apartments, which include sprinkler protection and improved automatic fire detection. Figure 1, from the original NF19 data, compares the average total FED per fire with the time required for occupants to wake up once alerted. The data shows the average total FED is at least three times lower for the open-plan design than the design based on Approved Document B. 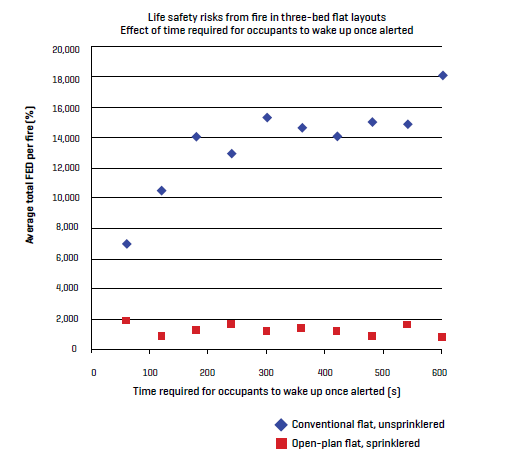 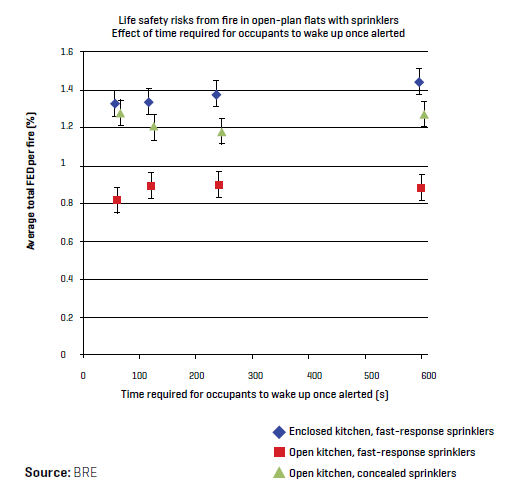 Figure 2: Comparison of average FED per fire and waking time in open-plan flats in the extended study

In both variations, the average total FED per fire is less than where the kitchen is enclosed, including where the slower-responding concealed sprinklers are modelled. This is probably because the sprinklered fires, which are of a fixed size, occur in a larger overall volume; this results in the heat and products of combustion, through which occupants have to escape, being of a lower intensity and toxicity due to dilution with air.

The findings demonstrate that two of the limitations of NF19 are not significant for case 3c, allowing us to conclude that the access room may include a kitchen area and that sprinkler heads with a higher RTI may be used, for a value of up to 115(ms)1/2.

The updated findings are summarised in Table 1. These results also offer supporting data for buildings that have been designed in accordance with the superseded BS 9991: 2011 and those for which sprinkler systems with concealed heads have been previously approved by the authorities having jurisdiction. 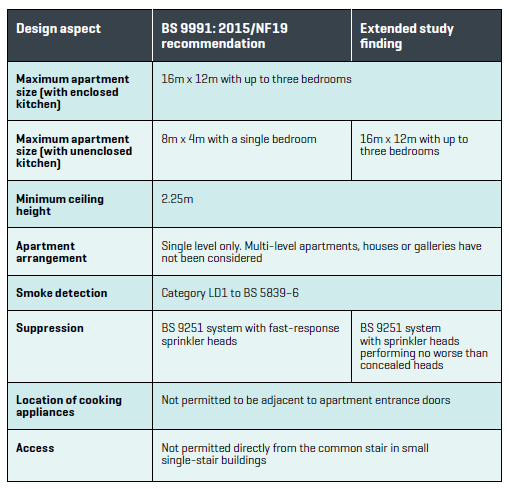 Certain limitations remain, however, as per the original NHBC study. The study, like NF19, did not investigate apartments greater than 16m x 12m, multi-level apartments, smoke control systems or alternative types of automatic suppression. Neither does it directly address the proximity of kitchen cookers to apartment entrance doors.

For the design of apartments outside the scope of these studies, further research with suitable fire modelling tools would be necessary to assess whether a particular design is appropriate.

Interpreting the study results, the delay in sprinkler activation is clearly a significant factor. Providing appropriate information to the occupier and good management and maintenance are recommended to promote the effective operation of sprinklers. Poor maintenance, painted-over heads and so on could result in a sharp reduction in sprinkler performance and a lower standard of life safety compared to traditional apartment arrangements.

Andy Ballantyne is an associate at Trenton Fire