By the end of 2018, the new ISO classification for the sound insulation of buildings should be ready after many years’ work. The Acoustic Classification Scheme for Buildings (ACS) will give guidance on acoustic comfort for all types of building, including apartments, attached houses such as terraced and semi-detached dwellings, hotels and schools, and for zones offering protection from noise in buildings such as offices.

Drafting the standard has been no easy task; neither has the outcome been universally well received. The simple A to F bandings used almost obscure the complexities of trying to standardise an approach for all forms of sound insulation.

With more than 16 different criteria each for airborne and impact sound insulation globally, as well as 5 different frequency ranges and weightings and 21 frequency spectra to calculate, the new standard could never suit everyone. 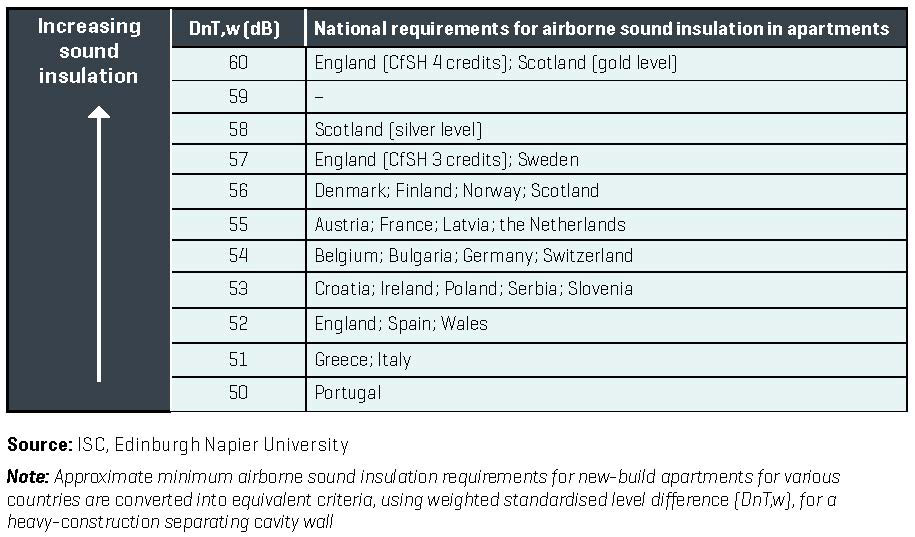 From current discussions on the new standard, it is unlikely that any country’s regulatory sound insulation requirements will achieve an A rating, and many will sit in levels C and D. Countries that have not altered their sound insulation regulations for more than 30 years are likely to start in band E; indeed, for many the rating bands should perhaps have extended to G, to help assess some of the very old housing stock and benchmark future sound insulation improvements.

In the coming months, the final details and A to F bandings for sound insulation will be ratified. The new ISO standard may have the following influences.

One subject much debated by acousticians is whether more emphasis should be placed on low frequencies when considering sound insulation, such as bass music and footstep noise.

Some countries, such as England and Wales, use a low-frequency correction factor, Ctr. Sweden and France introduced a 'living noise' spectrum down to 50Hz to more reflect typical noise frequencies in a home. Many countries, including the UK, instead use a 100Hz minimum due to difficulties of accurately measuring low frequencies in small rooms with volumes less than 40 cu. m.

The ACS makes a significant difference because, while rating bands C to F will enable countries to report the normal medium and high frequencies of 100–3,150Hz, rating bands A and B have a strong emphasis on low frequencies.

One subject much debated by acousticians is whether more emphasis should be placed on low frequencies when considering sound insulation, such as bass music and footstep noise

One effect of this is that some lightweight buildings may struggle in certain cases to achieve A and B ratings. To do so for separating floors in concrete apartment buildings is likely to entail the use of slabs cast in situ rather than precast, with a minimum thickness of 250mm as the norm for floors as well as secondary ceilings and floating floors.

Even with an optimum, A-rated floor, the limiting factor will be flanking sound transmission through perimeter walls, with glazing systems and continuous external walls being their Achilles heel.

Any new ratings take time to bed in. Some governments may not wish to use the new ISO – and will not have to, as it is not a directive – though organisations with the most control over their construction systems, such as hotel chains and off-site modular system providers, are more likely to use it. However, the complexity of the ratings and the variations in calculation mean everyone might want to brush up their acoustic knowledge.

Prof. Sean Smith is Director of the Institute for Sustainable Construction at Edinburgh Napier University and acoustic advisor to Robust Details. Philip Dunbavin is the Managing Director of PDA and BSI representative on the Acoustic Classification Scheme ISO committee