Terracotta is a durable building material that has been widely used, but suffers when poorly maintained. Clara Willett looks at its history and how to ensure its upkeep

Well-produced terracotta is an extremely robust construction material, which can last centuries. However, lack of maintenance and misjudged interventions can result in accelerated deterioration. Understanding its composition and uses can be helpful in tracing the causes of any deterioration, as well as informing appropriate maintenance and repair.

Terracotta means 'baked earth', and it has been produced for thousands of years by moulding and firing clay to create roof and floor tiles, bricks, statuary and a range of other clayware. It is specifically defined as a fine textured earthenware that lends itself to fine detail, being particularly suitable for decorative embellishments. Glazed terracotta is called faience (see Figure 1). 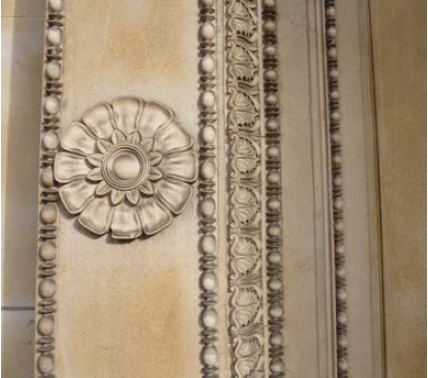 Clay itself comprises a variety of phyllosilicates – hydrous aluminium silicates – and other minerals such as quartz, feldspar and metal compounds. Common clays used in British terracotta include china, ball or fireclays, each with different constituents that impart certain qualities and characteristics:

Historically, clays were extracted close to the manufacturer’s premises or sourced for their particular properties, but manufacturers learnt to blend different clays to produce a variety of terracottas that differed in texture and colour. Modern terracotta production uses a blend of different clays that provide consistency in the end product.

To refine the clay, it is ground and tempered with various compounds and fluxes, which reduce the melting point of the clay, and then mixed with water to make it more malleable so it can be manipulated into the required form. The clay is then pressed or poured – slip-cast – into a plaster mould (see Figure 2). Other mechanised processes such as extrusion and stamping are used to produce large numbers of the same element. Bespoke pieces can also be sculpted by hand. 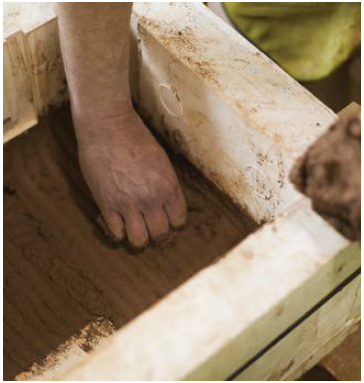 Figure 2: Clay being applied to plaster mould. This process, called slip-casting, is designed to shape the clay into the required form before firing

The resulting greenware is hollow and ideally has an even wall thickness; its hollowness minimises the firing time and lightens the piece considerably. The greenware is air-dried and then fired in a kiln – traditionally coal-fired, although modern manufacturing uses gas.

Firing at typical temperatures of 800–1,250°C, the material fuses and, to variable amounts, vitrifies; this is a process that increases the mechanical strength and reduces the porosity of the terracotta. The extent of vitrification depends on the properties of the raw material and the firing temperatures. The surface closest to the heat vitrifies first and creates a narrow boundary that is known as the fireskin.

Until the 19th century, kiln technology was not a precise science; maintaining a constant temperature was difficult and the resulting terracotta was often variable in colour and size. Modern kiln technology has eradicated these problems, producing even-coloured pieces, and improving accuracy of size and colour. However, this also eradicates any aesthetic imperfections, making it virtually impossible to match historic terracotta accurately.

The colour of the raw material, the temperature and the length of firing all affect the final appearance of the terracotta, and the drying and firing processes reduce the size of the piece by between 5% and 12%. Once fired, the terracotta is a brittle material composed of around 75% silica – silicon oxide – with a porosity of 5–10%. Faience, being glazed, has an even lower porosity at less than 1%.

Terracotta is very strong in compression, being able to withstand 40–55.2MPa, but weak in tension, withstanding 5.7MPa. Its thermal expansion coefficient is lower than that of steel, near which it is often located – to disastrous effect, given that any thermal or corrosive expansion in the embedded steel can cause cracking in the terracotta. 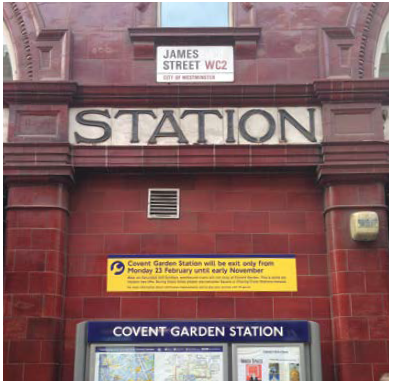 Application of a glaze allows a larger range of surface hues and textures, using a clay-based binder with a flux and colourants. This glaze is generally applied before firing but occasionally afterwards, resulting in a twice-fired terracotta. Modern health and safety requirements prevent some traditionally used compounds being incorporated into terracotta, which makes exact replication extremely difficult (see Figure 3).

Well-fired terracotta is highly resilient, with several examples from the 16th century still in excellent condition in the UK, such as Hampton Court. Conversely, some examples have deteriorated considerably even though they date from a much later period. There are a number of reasons for this discrepancy.

Poorly manufactured terracotta often deteriorates through the weathering and breakdown of the surface and the substrate beneath. Inherent manufacturing defects such as contaminants and inadequate firing result in the deterioration of the terracotta substrate and can account for its failure.

However, water is the main enemy of terracotta. Leaks from faulty rainwater goods such as back gutters and internal downpipes, which are frequent detailing on terracotta buildings, as well as through open joints can result in deterioration due to freezing and thawing. This can also lead to the failure of other construction materials, with disastrous consequences for adjacent terracotta. Moisture ingress can cause the expansion of infill material, mobilisation of salts that can crystallise and disrupt structural integrity, and corrosion of embedded metalwork that causes terracotta to crack and break.

Environmental conditions are also a significant factor in the deterioration of terracotta, with the climate, precipitation and colder temperatures leading to freezing and thawing damage. Sulphation does occur on some terracotta, but is mostly found on that made from kaolinite clays containing calcium carbonate; this reacts with sulphurous acid in the atmosphere to create calcium sulphate, forming a skin that can exfoliate and thus remove surface detail. 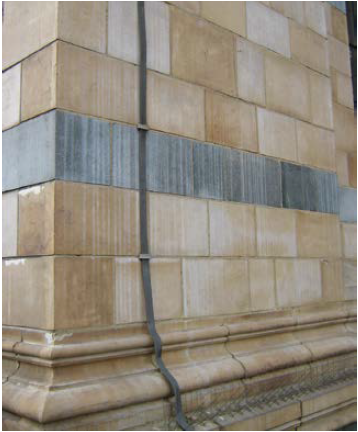 Irreparable impact has also been caused by cleaning methods such as sandblasting and the use of acid or alkali, which leave the surface pitted or etched. Removal of the fireskin often leaves the more permeable substrate exposed and vulnerable to further decay (see Figure 4).

Installation of services pipes and cables often leads to access holes being drilled with little thought given to their positioning, and the repeated removal and re-installation not only affects the homogeneity of the facade but can allow moisture penetration (see Figure 5). 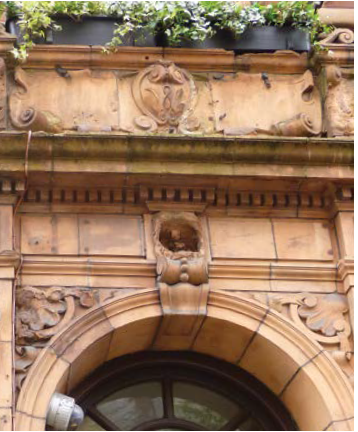 Figure 5: Terracotta with drill holes that may or not be filled afterwards, and if they are it is often done poorly

The priority for maintaining terracotta is to prevent water penetration by keeping rainwater goods and flashings functioning and joints pointed. Repointing should be carried out using a mortar that suits the type and condition of the terracotta, and the degree of exposure. Hydraulic lime mortars should not just be used because they offer the convenience of a quicker, chemical set; other more permeable mortars based on lime putty with pozzolanic additives can offer the required properties.

Although in the 19th century terracotta was promoted as a self-cleaning material because it did not soil in the same way as natural stone, it does in fact soil and suffer pollution damage. Sensitive cleaning is a useful prelude to initial assessment of building condition and for colour-matching for any replacement terracotta units.

It is essential that an initial assessment is made of the condition of the terracotta and the nature and extent of soiling, followed by trials to identify the most suitable cleaning level and method. Abrasive methods are an option, but the selection of aggregate and pressure needs to be carefully considered since the risk of damage is high. Chemical cleaning agents based on alkalis or acids can be effective, but misuse can cause irreparable damage.

Water-based cleaning can also be effective, but excessive water should be avoided to prevent further deterioration. In a similar way, steam cleaning can be very effective, while minimising the amount of water used. The most appropriate cleaning method and extent of cleaning should be determined after discreet trials are undertaken and assessed. It is essential to select a practitioner who has demonstrable experience in dealing with the material.

Structural defects are sometimes caused by corrosion of the supporting metalwork. This will require opening up to investigate the extent of this deterioration, and further dismantling of the terracotta to treat the metalwork, which often leads to its destruction.

Terracotta is not yet given the material significance that stone facades of comparable age receive – it is seen as a manufactured product that can be replicated and is therefore more replaceable than natural stone. Although some replacement may be necessary for structural reasons, repair methods are often dismissed because they are not deemed sufficiently durable, either physically or in terms of appearance, to provide a lasting solution.

It can be difficult to repair successfully as surface repair materials can be difficult to match in terms of colour and texture. However, some techniques have been shown to perform well over a 20–30-year span, and have the advantage of being less invasive, preventing the loss of original fabric. Furthermore, surface patch repairs are often cheaper to carry out, and replacing them over the longer term may be an option as part of the maintenance of a building.

Once a terracotta unit is broken, it can be difficult, though not impossible, to carry out structural repair using similar techniques as those used to repair natural stone, through pinning and indents pieced in with matched reclaimed terracotta.

Where replacement is required, new units can be commissioned and produced by specialist companies, although the lead times can be lengthy. Correct specification should ensure that the technical details of the replacements match the original accurately, and this will include size – taking shrinkage into consideration – compressive strength, porosity, colour and texture. New architectural units also have to comply with the European standard specification for clay masonry units, BS EN 771–1: 2011.

With the sensitivity and expertise afforded to other historic fabric, terracotta can be maintained and repaired so that it functions as originally intended and can be appreciated for the outstanding material it is.

Clara Willett is a senior architectural conservator at Historic England