Ash dieback has spread relentlessly across the UK since 2012. John Lockhart reports on how it threatens to change the landscape and will cost millions to manage

Almost 6 years ago, the then Secretary of State for the Department for Environment, Food & Rural Affairs Owen Paterson held the Chalara ash dieback summit, as we appeared to be facing a repeat of the horrors of the Dutch Elm outbreak some 40 years previously. There was still hope that we might slow the spread of Chalara and that some specimens of ash, the UK’s third most abundant tree, would shrug off the horrific disease that had claimed all but 2–3% of the trees across continental Europe.

Following the predictions of Armageddon in 2012, the perception is that the ash dieback issue has since gone away. Sadly, this is far from the case.

It is worth reminding ourselves of the facts about ash trees and the disease in the UK. Research by the Tree Council suggests there are 126m ash trees (Fraxinus excelsior) greater than 5cm girth in British woodlands, and a further 30–60m in other areas, with potentially 2bn saplings and seedlings.

Ash dieback is a fungal pathogen (Hymenoscyphus fraxineus), and is often referred to as Chalara in reference to its earlier specific name, Chalara fraxinea. 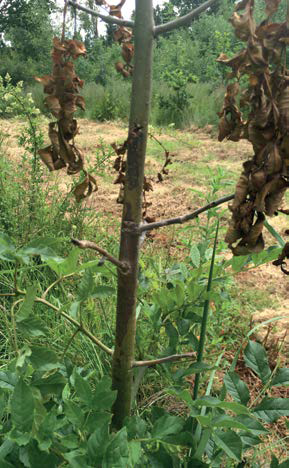 The disease has spread swiftly and relentlessly since 2012, and is now present in all UK regions including the Isle of Man, where it was first confirmed in 2017. The spread is most extensive in England’s eastern counties, particularly in Norfolk, Suffolk and Kent. The disease is also widespread in the South West and in particular Devon, where there is 100% coverage across the county. Reported cases are mapped by the Forestry Commission on its interactive map.

Evidence from continental Europe, where the disease has infected trees in large numbers since it was first discovered in Poland in the early 1990s, indicates that only 1–5% of the ash        Figure 1: Symptoms on a young plantation ash
population will remain unaffected by dieback.

Once a tree becomes infected the disease is usually fatal, either directly, or indirectly as it becomes vulnerable to other pests or pathogens – in particular Honey Fungus (genus Armillaria), which causes rapid decline and potential death.

In both continental Europe and the heavily infected areas in the UK, young trees, regeneration and coppice regrowth have been killed quite quickly because their crowns are close to the ground, while older trees have resisted until prolonged exposure or infection with a secondary pest or pathogen proves fatal. The particular genotype of the tree is critical in determining its susceptibility to ash dieback, though site conditions also play a key role. The stand structure, health and vigour of the tree and environmental factors such as climate, soil and moisture availability can all be important. The general condition of the stand is similarly critical, and well-managed sites with strong growing ash trees have a greater resistance.

It was hoped that UK ash would demonstrate a greater level of natural genetic resistance to the disease than trees on the continent. However, this is not the case, and as in Europe, only 1%–5% of the national stock is expected to display a high degree of tolerance.

Since 2012, the government has invested some £6m in dieback research, which has sequenced the genome of the ash and the fungus. Working together, the Forestry Commission and the Food and Environment Research Agency have undertaken the world’s largest screening trial for tolerant trees, and breeding programmes for disease-resistant specimens are being progressed with the hope of securing the long-term future for the ash in the UK and elsewhere.

Over the same period, the Department for Environment, Food & Rural Affairs (DEFRA) has enforced a nationwide ban on the import and internal movement of ash plants, seeds and trees. While the movement of ash timber, firewood and woodchip – whether from infected or unaffected sites – is not restricted, given that there is a low risk of infection, landowners and managers should take steps to avoid possible transmission by removing leaf litter and debris before materials are transported between sites. The Forestry Commission also provides guidance on general biosecurity.

A large proportion of the 60m ash trees growing outside woodland are located in high-risk locations such as well-used roads, infrastructure corridors and areas including schools, golf courses, parks and so on. This is therefore a major health and safety concern for landowners and local authorities.

In 2015, DEFRA established the Ash Dieback Health and Safety Task Group. RICS, via its Rural Professional Group, has been supporting the task group, and its meeting in January was hosted at RICS HQ in Westminster. The group is currently reviewing the options that will enable landowners, land managers and local authorities to address the impacts of ash dieback effectively, including the possible extension of felling licence exemptions to reflect the emerging requirements for managing diseased trees. The task group is expected to outline its proposed strategic approach in the next few months, and we will ensure that RICS members are kept fully briefed through the usual channels.

One of the key challenges for local authorities, infrastructure bodies and private landowners alike is the scale of the issue and the speed of impact. Devon County Council has been working closely with the Tree Council to deal with 441,000 trees within falling distance of a public highway. While only about 6,300 of these are the direct responsibility of the county council, historic precedent for dealing with dangerous highway trees has seen it picking up 50% of the costs. Dealing with all the private roadside ash trees will cost around £52m, of which the council anticipates funding £26m, although this bill does not include the costs of highway closures or any loss of natural capital value.

In February the county council confirmed a programme of targeted felling, at this stage focusing on dangerous trees. Other counties are expected to follow a similar approach as the disease progresses. The implications for all landowners and managers will be significant, and as felling advances, the public will start to notice a significant change to the landscape.

Land managers will need to be alert to the issue, and plan and budget for the impacts. Replacement strategies will also be critical in some treasured landscapes, and at present there is no indication that funding for either felling or replanting will be made available from the public purse, beyond the modest amounts available from the Forestry Commission for removal and replacement of young planted trees.

The matter is also being considered by the National Tree Safety Group. It prepared a short statement on ash dieback in 2012, and at a recent meeting where RICS Rural Professional Group was represented, it was agreed to update this statement on an interim basis now and more comprehensively for publication in 2019.

While health and safety is focusing attention, the implications for woodlands are also important, especially in the East Midlands where ash comprises the majority of the UK’s highly valued woodlands. Well-managed, vigorous woodlands are likely to be at lower risk and the forestry industry is developing useful models to assess risks and guide management and planning.

Proactive measures will be important to ensure that, where appropriate, the value of the standing crop is realised before it fails, and management work is planned to maintain and secure its structure and biodiversity. With some 42% of UK woodland effectively unmanaged, there is a significant opportunity to diversify our restricted species and address our ageing tree resource.

Another issue is the safety of contractors. Trees that have died or are infected can be extremely brittle and unstable, meaning felling or other management work has the potential to be extremely dangerous. Effective planning is therefore critical and, ideally, harvester felling or mobile elevated work platforms should be used. Further details can be obtained from the Forestry Industry Safety Accord.

Sadly, there are many other threats to the UK’s non-woodland trees in addition to ash dieback. Dutch elm disease still threatens trees that become large enough for the Elm Bark Beetles (genus Scolytus) to colonise the tree and carry the fungus to a new host. Other, newer, threats such as the Asian Longhorn Beetle, which recently caused 2,160 trees to be felled in Kent, or Sweet Chestnut Blight, which has been found in London, Kent and Devon, need control measures and vigilance to ensure that they are contained and not allowed to establish themselves in the UK.

Other pests and diseases yet to reach the UK include the bacteria Xylella fastidiosa, which has caused significant losses of olive trees in Italy and is now moving across the continent and mutating to acclimatise to colder latitudes. It is known to kill a wide range of trees and shrubs, including some of the key species in the UK. Further details of all tree pests and diseases can be found on the UK’s Plant Health Risk Register.

While they were anticipated in 2012, some of the impacts of ash dieback are only now starting to materialise and landowners and managers need to be alert to the issue and start planning and budgeting for these; as Devon County Council will attest, the effects are likely to be significant.

Sadly, the next decade or 2 will most likely see the majority of mature ash lost from the UK landscape, and it is therefore incumbent on us to take positive steps now to ensure that impacts are managed and the structure and integrity of tree cover and woodlands are maintained for the future.

John Lockhart is Chairman of Lockhart Garratt, an independent forestry and environmental consultancy