While demand for equestrian development is on the rise, the regulatory situation is trickier than it might first appear. Jill Scrivener offers some guidance

Equestrian opportunities are a hot topic among clients as, with more than 1m horses in the UK and activities increasing in popularity, there is a strong demand for facilities. The equine industry is the second largest rural employer after agriculture, and there are an estimated 1.3m regular riders in the UK, with a further 3.1m wanting to return to the saddle, according to the Equine Sector Council and the British Horse Industry Confederation Mid-term manifesto for the horse 2017. Clearly, this presents opportunities for landowners; but before proceeding with any change of use, there are many issues to consider.

In the past, there was only limited support in planning policy for equestrian development, with changes of land use from agriculture to equestrian struggling to garner support. However, the position has now relaxed for land outside the green belt, to reflect the growing demand for equestrian facilities and the benefits this use can have on the rural economy.

Such a change of use does not always require planning permission. If the land was part of a larger equestrian holding that has been fragmented, becoming a separate planning unit, and if it continues to be used for equestrian purposes, then it is generally considered that the lawful pre-existing use of the site continues. As there has been no material change of use, planning permission is not required.

Most advisers, and indeed landowners themselves, also know that land in agricultural use benefits from property relief and can be passed on free of inheritance tax. However, land in equestrian use will not be afforded the same benefits, although equestrian stud farms are an exception. Additionally, agricultural land and buildings are exempt from non-domestic rates, while land in equestrian use is not. This is becoming increasingly significant in the light of the Valuation Office Agency (VOA)’s apparent targeting of equestrian development and activities.

While equestrian businesses are rated as non-domestic, what is less well known is that significant rate increases are anticipated, and in the South East some riding schools and livery yards have already been hit with hikes of up to 365%. It seems that the VOA is specifically targeting equestrian development, realising that many enterprises have slipped under the radar.

What is most surprising of all, though, are the implications for equestrian facilities linked to private use. Few appreciate that the core test for non-domestic rates is not whether there is a business in operation but actually one of appurtenance – meaning that the stables or facilities must be within the curtilage of the dwellinghouse.

A good illustration of the issue would be a landowner or client who competes in equestrian events at a high level. They might own a few horses and also ride for others, so require stabling for 15 horses as well as an indoor school, manège, horsewalker, canter track and so on, all to be sited in the main yard area away from the dwellinghouse. While there is no business in operation, such facilities would be liable for non-domestic rates and at this scale the cost would be significant.

So, whatever the proposal – commercial or personal use – there are matters concerning rateable value that may need to be factored into any final decision.

Generally, the justification advanced for equestrian use proposals should ensure that proposed structures meet the basic requirements, as detailed, for example, in the Department for Environment, Food and Rural Affairs Code of Practice for the Welfare of Horses, Ponies, Donkeys and their Hybrids. Land availability should also be appropriate, allowing around 0.4ha per horse – although horse size, stable availability and activity management must all be taken into account.

Although in the past there was often resistance to the equestrian use of land, as has been mentioned, policies are nowadays often permissive and broadly supportive – except where they concern land in the green belt.

As of 31 March 2016, it was estimated that about 1.6m ha, or around 13% of the land area of England, was in the green belt. The government attaches great importance to such areas, with the intention of preventing urban sprawl by keeping land permanently open.

The original Planning Policy Guidance 2 supported equestrian use of land as not being 'inappropriate development' in the green belt, with no need to demonstrate the 'very special circumstances' (VSCs) necessary to overcome harm. However, this changed radically in 2012 when the guidance was replaced by the National Planning Policy Framework (NPPF), which does not identify a change of use of land as being 'not inappropriate' development. It is now therefore necessary to demonstrate VSCs, which is notoriously difficult. This matter has been well covered, with a useful summary provided in the judgment in Fordent Holdings Ltd v SSCLG and Cheshire West and Chester Council [2013] EWHC 2844.

If the land is in the green belt and benefits from an authorised equestrian use, paragraph 89 of the NPPF states, among other things, that the provision of appropriate facilities for outdoor sport, outdoor recreation and so on is not inappropriate development, as long as it preserves the openness of the green belt and does not conflict with the purposes of including land within it. Nonetheless, the Planning Inspectorate still appears to take a hard line on the matter, and there are many equestrian proposals in the green belt that are not supported at appeal. The irony is that there is a clear correlation between areas of land in the green belt and the peak clusters of horse ownership across England, as indicated in red in Figure 1A. If we compare this with green belt designation (see Figure 1B), it is clear that the highest levels of equestrian ownership are in green belt areas, which clearly presents a challenge. 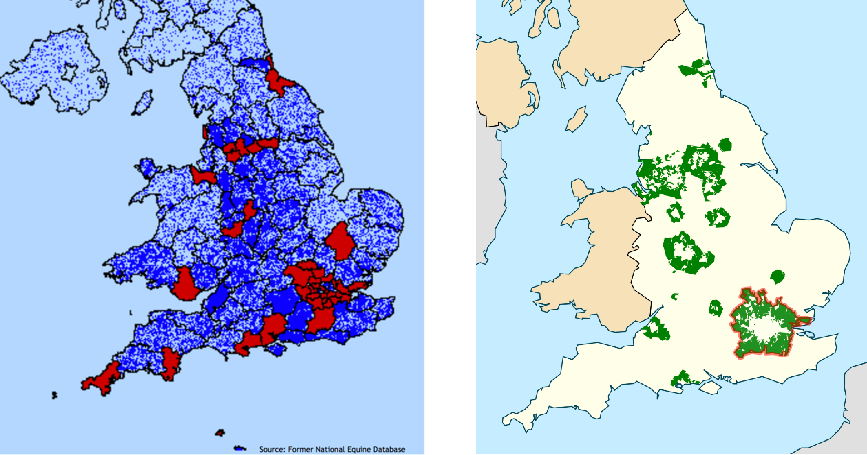 Paragraph 111 of the NPPF encourages the re-use of brownfield land – land that has been previously developed – provided that it is not of high environmental value. Annex 2 to the NPPF identifies 'previously developed land' as that which is or was occupied by a permanent structure; it specifically excludes agricultural and forestry buildings, but does not exclude equestrian land or buildings. This is because the change to an equestrian use is 'development' in planning terms, and, therefore, equestrian buildings constitute brownfield sites.

In the light of the restrictions around open countryside and green belt, this could create an opportunity for landowners. Although there are still other factors that must be considered, sustainable development being a core feature of the NPPF, designation of a site as brownfield will often provide wider development opportunities.

The start of this article highlighted the potential loss of a fallback position in relation to agricultural permitted development rights through the change of a building to equestrian use. However, if a building can be seen as a brownfield site with greater opportunities for conversion or development, then there could still be a fallback position and thus greater opportunities in the future.