The Apothecaries Hall in Blackfriars is the oldest extant livery hall in the City of London, and the central courtyard of this scheduled ancient monument has recently undergone a complete refurbishment following extensive dry rot.

The external walls of the courtyard had originally been completely rendered with ashlar lines to give the appearance of stonework. In addition, there are stucco cornices, pediments and window surrounds on the Great Hall elevation. At a high level on the Great Hall external elevation there is also a plaster crest of the Apothecaries’ coat of arms, and a large timber crest above the main entrance door that was reputedly taken from a barge where they stored some of the more volatile chemicals.

Originally appointed as property and construction consultants, we at Ingleton Wood were initially asked to confirm the structural adequacy of a timber bressumer in the Warehouses, which had previously suffered from minor rot. However, investigation revealed that there was an extensive and active dry rot that had spread across much of the external wall. The cause was found to be a leaking downpipe, with water soaking through the render and saturating the external wall. 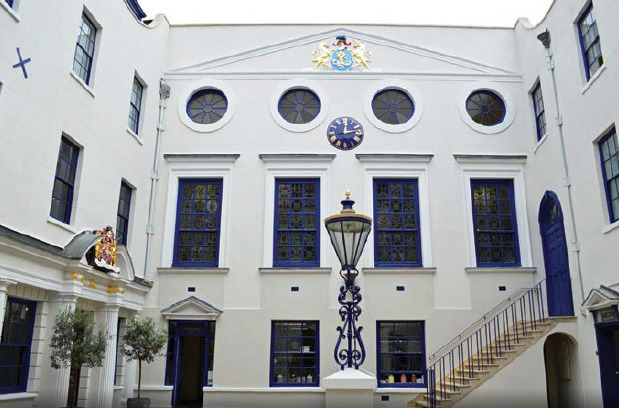 Following the downpipe repair and treatment of the rot, the external render was removed locally by a combination of hand and mechanical tools to allow the wall to dry. It was then discovered that the original lime render had been given an overcoat of, or in many areas replaced by, a hard cement render. Further investigations found other downpipes were also leaking and the cement render was allowing water to enter the building through cracks and holes, trapping it in the walls. As a result, there were further outbreaks of dry rot elsewhere, as well as the potential for beetle attack.

We recommended that the cement render should be completely removed and replaced with lime render, which would allow the external walls to breath and dry out naturally. Further investigations also showed that water had seeped behind the paintwork on the cornices, timber window sills and stonework, and they too had become saturated. We recommended the cornices and stonework were stripped and redecorated in a mineral-based paint which would be breathable but still be durable, rather than the modern paints that had previously been used.

The paintwork was removed by the use of chemical poultices on the more delicate cornices. Prior to repainting the top surface of the cornices, a thin lime render coat was applied to improve water-run off. However, it was decided not to remove the previous cement repairs or try further repairs to the moulded underside to prevent the possibility of further damage.

The active involvement of Historic England was particularly important, not just as a statutory consultee but also for the wider input and advice it could offer.

As well as setting conditions before it could approve our render removal methods and specification of new materials, the organisation also asked for a detailed recording of the brick structure below the render, requested that stonework and lead downpipes should not be repainted and required that it be consulted on all colours and finishes.

However, it also understood that the overall appearance of the courtyard was important to the Apothecaries, and withdrew its requirement for the downpipes and stonework sills to be left unpainted once finding out these had been extensively patch-repaired in the past. Input was also received from the Heritage of London Trust, which helped fund the timber coat of arms’ restoration.

After consultation, a natural hydraulic lime render was selected. Historic England advised that white render and blue windows were the most appropriate colour scheme for buildings of this age, enhancing the courtyard’s appearance by improving contrast and adding depth to the reliefs and ornamentation.

The specialist knowledge of the principal contractor, DBR Conservation, was also integral to the success of the project, in particular restoring the lost detail on the plaster and timber coats of arms. It managed to establish and restore the original colour scheme of the coat of arms beneath the layers of overpainting by using spectral analysis of paint samples. For example, the background colour was originally found to be a rich, warm blue, not the cool green-blue that was on show.

It was clear that, over the centuries, the courtyard had undergone many alterations, and it was important to identify when these had occurred so the conservation team could determine how defective elements might be repaired or replaced. As no official records were available, the team had to rely on a mixture of anecdotal evidence and paintings and photographs from the 1800s to the 1980s. 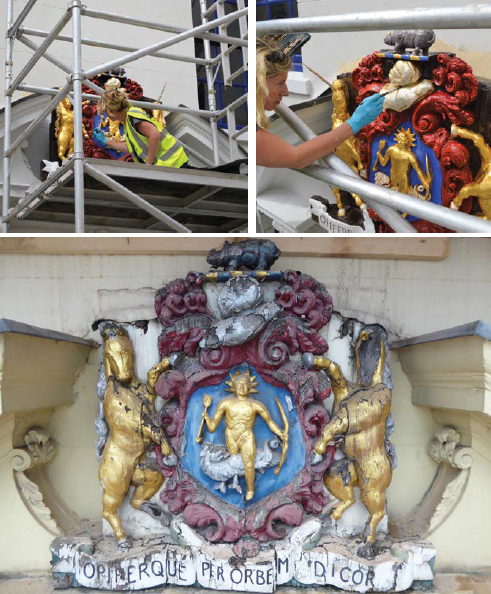 Figure 2: The Worshipful Society of Apothecaries' coat of arms (above) before restoration work was carried out (top, left and right)

It was only once the render had been removed that it became evident that the paintings were largely correct and could provide a valuable documentation of the changes over time. For example, the Great Hall elevation was shown to be gauged brickwork that had been rendered over at a later date, and that the staircase had evidently been rebuilt in the post-war period.

Removing the render also uncovered interesting and unexpected items, such as Roman tiles that had been used to line some external window reveals and some cornices formed from Higgins patent render, a rare and briefly fashionable material of the late 18th century comprising sand, lime and bone ash. It also became evident that although the windows were well maintained, much of the timber and stonework sills, cornicing, downpipes and copings had been patch-repaired and replaced with modern materials. While this had presumably resolved immediate issues it had also contributed to the long-term deterioration of the building. In particular, the cement render had been laid so thick that the surrounds of the large circular windows no longer stood proud of the wall faces and did not channel water away, so each had severely rotted at the bottom where this pooled.

The refurbishment could not have been succeeded without all parties working in partnership and sharing their expertise. The courtyard is perhaps now in the best condition it has been for more than 200 years, while the change in the colour scheme has given – perhaps for the first time in a century – a view of the space as it was originally meant to be seen.