As there are a range of different building facades, it is not always easy to appreciate the strengths and weaknesses of each. Diego Alves rounds up the various types

In most major cities around the world, buildings have articulated and eye-catching facades, but these can usually be divided into 2 basic types: traditional and modern.

The main difference between the 2 is that traditional facades are generally load-bearing while modern ones, or curtain walls, tend to be self-supporting and transfer lateral wind loads to the main structure through connections at floor levels or with the columns of the building.

While curtain walls are generally considered to be modern if they date from the advent of steel-framed structures, there is evidence that a rudimentary version was built for the palace of Curtea Veche in Hungary as early as the 1700s.

Today, iconic buildings such as the Gherkin in London, the National Centre for the Performing Arts in Beijing, the Rock in Amsterdam and the Dancing House in Prague are a few examples of how imagination and technology have worked side by side in the construction of facades that combine the architect’s vision with technical excellence.

The division of facades into 2 types is quite simplistic. It should be qualified by noting that, while modern facades are generally understood to be curtain walls, these are only one of many kinds of system available, each having their own distinctive performance characteristics and complexities.

Apart from its aesthetics, the primary functions of a curtain wall are to resist air and water infiltration, to accommodate wind and other forces acting on the building, and to support the wall’s own dead load.

In specific cases, they must resist hurricane and blast forces or even comprise special stealth materials for radar-absorbent cladding. In every case, they must meet these requirements effectively and need minimal maintenance throughout their design life.

The modularity, high performance and flexibility of modern curtain wall systems is ideal for use in multi-storey buildings. There are several types.

First is the so-called stick system, which is made up of pre-cut metal profiles – sticks – that are assembled on site to create a structural grid or frame that is attached to the structure.

Double-glazed units and spandrel panels are fitted into the frames and the panels are retained with pressure plates and architectural cover caps. Putting this product together is labour-intensive, and the finished quality and performance depend considerably on the experience of the installation team.

Second is the unitised facade system, which comprises the same components although these are invariably assembled in a factory-controlled environment and then delivered to the site in their entirety. When installed on the building, the joints between individual units are sealed with purpose-designed gaskets.

This system is more expensive, but installation is rapid and does not normally require costly scaffolding.

The evolution of the unitised system has resulted in the climate wall and closed-cavity facade (CCF), which may include interstitial blinds and offer thermal and acoustic benefits. Both climate wall and CCF could be described as high-quality double-glazed units, with the latter containing pressurised, dehumidified air in the unit.

To provide a flush face, the glass in unitised systems is usually bonded to the aluminium frame with structural silicone or clamped to it with special hidden toggles fitted to the sides of the unit. 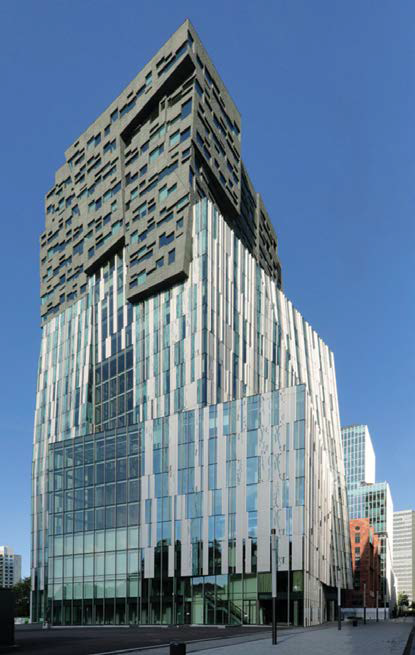 Panelised facade systems are similar to unitised ones, but the prefabricated modules are generally much larger and can incorporate different materials and components such as metal panels, brick and windows.

They can also comprise pre-cast concrete modules and be finished in a variety of materials, including off shutter, granite and reconstituted stone. The finished panel is delivered to the site to be installed on the building by crane.

Flue or triple wall facades are rarer, and comprise an outer and inner curtain wall separated by a wide air void, usually incorporating an open-grid walkway to facilitate air circulation in that void. This system offers thermal and acoustic benefits but also requires more space. Flue walls can be passive or active depending on the way in which the passage of air in the void is controlled for optimum performance.

Regardless of type, all modern facades are defined by their extensive use of glass and metal, which gives them a smooth and slick surface.

Earlier types of modern building combined traditional construction materials with modern facade systems. Typically, such facades will be made mostly of stone or of a pre-cast construction, with windows installed as vertical or horizontal ribbons.

These facades invariably rely on sealants to provide a waterproof barrier between the structure and the window system, the failure of which manifests with time and the degenerative effects of weather and UV light.

It is important to distinguish between the different types of facade already used on such buildings as these dictate options for improving the fabric’s energy efficiency.

Given the sustainability agenda, refurbishment and improvement of existing buildings would seem better than demolishing them and constructing new ones, with the planning delays, costs and carbon emissions the latter entail.

There are fewer options for improving traditionally constructed building facades than there are for modern buildings, due to the former’s intrinsic construction methods and robust materials such as brick, granite and limestone.

The rapid rise of rainscreen cladding in the past decade or so merits further discussion. Cladding on older high-rise buildings commonly uses rainscreen systems that are particularly suited to residential tower blocks, offices that have been converted into housing, student accommodation and budget hotels.

The aesthetics and energy efficiency of rainscreens offer immediate benefits. Such cladding can be fixed directly to the original construction with relative speed, and insulation and vapour control measures are fitted between them. 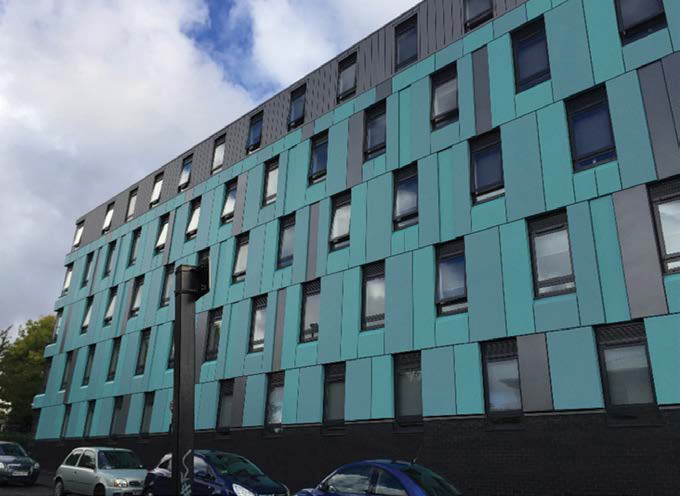 The cladding comes in a variety of materials such as high-pressure laminates, zinc, stainless steel, copper and a range of metal composites, including those that contain aluminium and, in high-profile buildings, even titanium. Glass-reinforced plastics or concrete and compressed cement panels are among alternative claddings.

Another quick way to improve buildings is to fix insulation to the existing wall and then apply an acrylic render to it, which is available in a wide range of colours. Readers should be aware of safety concerns over such systems following the Grenfell Tower fire, however, and discuss these with their clients at the earliest opportunity.

Aluminium composite material (ACM) cladding – not to be confused with the more common term asbestos-containing material, which has the same abbreviation – is a versatile product that has been around since the early 1970s and was used predominantly in low-rise constructions, typically at entrances and lobbies.

In recent years, it has been developed and used in high-profile properties such as the Marina Bay Sands Hotel in Singapore and high-rise offices and hotels in Dubai, among other locations.

ACM is essentially 2 thin skins of aluminium or other metal, bonded to a plastic core to form a relatively rigid sheet some 3–4mm thick. The sheet can be folded and shaped easily to form a cladding panel. The basic core material can be highly flammable, however, so it must be used with extreme caution, particularly on high-rise properties.

The insulation and cavity barriers behind it must also be selected and installed carefully to conform to the appropriate parts of Approved Document B. The system as a whole – the cladding, insulation, fixings and cavity barriers – must also comply with the requirements of BS 8414. The Department for Communities and Local Government’s guidance notes provide the latest information.

Readers should also be aware of the calls for cladding and the insulation behind them to be non-combustible. Although a system may satisfy current requirements, there is a public perception that fire safety in high-rise and high-risk buildings needs to be much greater, and this may affect the demand for and valuation of such properties in the future.

Both ACM and rainscreen cladding have limitations in terms of performance, but in the light of the Grenfell Tower fire, compliance with Approved Document B4 and, at worst, limited combustibility are among the most important requirements. Proper installation of cavity barriers, compartmentation and fire-stopping are likewise fundamental to compliance.

Since ACM is relatively light, flexible and of limited strength, the design and methods of installation must be considered carefully as well, to prevent it detaching during high winds, particularly in high-rise developments.

For a facade to perform throughout its design life and beyond, ensure good, thorough consultation at all stages of the procurement and installation processes.

Diego Alves is CBRE Director and Head of Facade Consultancy