As the International Land Measurement Standards are prepared for launch, James Kavanagh discusses how they can make the process of land and property transactions consistent around the world

We have almost reached the end of a long road: the International Land Measurement Standards (ILMS) have undergone an open, global consultation and draft versions have been downloaded hundreds of times.

The consultation has not only helped the coalition of more than 30 national and international organisations and institutions gather global market insight and commentary but also to inform the wider finance, legal, land acquisition and investment professions about the ILMS and the impact they will have on their work. Furthermore, the consultation has opened the debate on some new major global guides from UN agencies and helped embed ILMS in them.

With the formation of the coalition at the UN Food and Agriculture Organization (FAO) in June 2016, it was agreed that ILMS would be international, principle-based standards for recording and reporting information relevant to land and property transfers (see Figure 1). The standards aim to reduce the risks in such transactions by ensuring consistency and supporting land governance, robust conveyancing, secure lending and land registration. 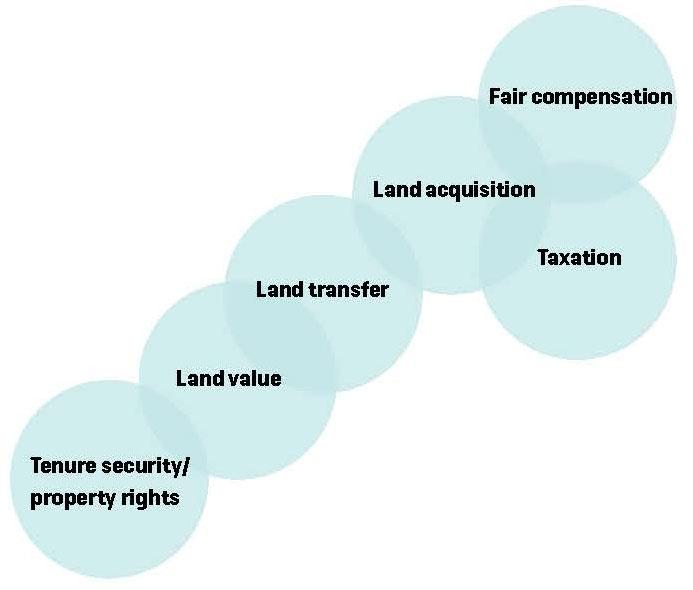 Figure 1: Land professionals work in a continuum of land-related processes from the establishment of tenure security to valuation, transfer and acquisition, compensation and taxation. Each process relies on the others, but not necessarily sequentially. A land valuation, a taxation receipt or both can be used to establish tenure security without the need for formalisation and titling. Land-based financing is now seen as a crucial element of the New Urban Agenda

Global consistency is provided by standards for classifying, defining, measuring, analysing, presenting and reporting land information, which can be applied at project, regional, state, national or international levels. ILMS are therefore both the standards themselves and a framework for reporting.

In a previous article, I outlined what ILMS are and are not. During the consultation, it has also become apparent that their flexible and non-prescriptive quality is a powerful incentive for their adoption, linking them directly to the concept of being fit for purpose.

Their non-prescriptive nature means the ILMS are aspirational rather than rigid, which is especially important where there are high levels of informal landownership and land use.

ILMS will apply across the globe, although many high-income nations will comply with the standards already. This suggests that the essential land data elements of ILMS are now available, but during land acquisition, assembly and referencing, processes can differ between agencies and create a confusing mix of authoritative data. Devising a primary, basic data standard for each land parcel, or an assembly of them, better enables land acquisition, valuation and compensation processes – an essential and costly element of all infrastructure projects.

High-income countries are better positioned to carry out land referencing, the formal investigation of rights held in land through the collection of data relating to ownership, environmental reports and land plans and deeds, among other factors. Referencing also enables land assembly, and ILMS support this process by helping practitioners and clients understand the potential risks in the data elements.

Low- and middle-income nations cannot afford the fees demanded by many professionals in the west, however, so a new combined way of thinking and practising is needed to support large-scale acquisition and development across the globe: ILMS match this need perfectly, as does the new RICS Land pathway.

The final standards should be reliable, expose the risk inherent in data elements, and ensure the integrity of the due diligence process in whatever context. The land transfer and reporting standard consists of 7 key elements required during due diligence to enable the process and minimise risks: land tenure; parcel boundary identification; site or land area; land use; services; building; land value or transfer price. This creates a data feedback loop, where elements such as valuation can be improved as land data becomes available (see Table 1). ILMS also contain an agreed geospatial survey accuracy table, which for the first time outlines what is globally agreed in terms of geospatial output, its relationship to scale and achievable accuracy – an enormous milestone.

Table 1: The ILMS land transfer and reporting standard consists of 7 key elements, included in this high-level summary sheet of the land information reporting network. These elements are required during due diligence to enable and de-risk the process

Each land data element contained in the ILMS can be used to facilitate land administration standards, enable governance, enhance policy, support tenure security, and help to benchmark nations against each other in line with the World Bank Doing Better Business Index.

The independent Standard Setting Committee (SSC) was formed by the coalition in January 2017 to develop the ILMS, and included technical specialists from 18 countries and a combined expertise covering more than 100 different markets. The SSC largely worked together online, although some met in person at the World Bank Land and Poverty Conference in Washington DC in March last year, at the FIG working week in Helsinki in June, and in Berlin in September.

The final consultation document went to 25 drafts, some with small, nuanced changes and others with major edits. However, this was a cathartic and necessary process for what can be a national and localised profession. The final standards are, we believe, exactly what the coalition requested and the SSC has done an amazing job, requiring diplomacy and doggedness to achieve global consensus.

This initial consultation process ended in February, and the ILMS were presented to the World Bank Land conference in Washington in March, which brought together more than 1,000 land professionals, academics and international agency staff. Further comments will be incorporated ready for the ILMS to feature at the FIG Congress in Istanbul in May. Another exposure draft consultation will take place in the summer, with final launch pencilled in for November.

Land formalisation and tenure security initiatives have been in operation for many years, with the World Bank providing billions of dollars in funding, and two major international agreements have made them even more significant. UN member states endorsed the 2030 UN agenda and committed to implementing both the Sustainable Development Goals (SDGs) and the New Urban Agenda (NUA) at the World Urban Forum in February. RICS, like many international bodies, is keen to engrain the SDGs in national and international initiatives, and ILMS are directly linked to SDGs 1, 2, 5, 9, 11, 15 and 16. The Land Portal has also developed an online resource bringing land-based indicators and targets together.

ILMS are directly linked to the new UN FAO publication Valuing land tenure rights: Technical guide 11 as well. This covers the issues associated with identifying and valuing tenure rights for different purposes, and offers guidance on how to ensure that valuations are undertaken in a fair, reliable and transparent manner – one which complies with international norms.

Other important developments include the UN Habitat Global Land Tool Network’s soon to be published guide on the valuation of unregistered land, and the UN Global Geospatial Information Management’s work with the UN Economic Commission for Europe on basic land parcel definitions, both of which have referenced ILMS, and the forthcoming RICS research paper on the valuation of unregistered land. As both initiatives feature ILMS, it underlines the standards’ future role in land-based financing and establishing land markets.