Investing in new woodland offers landowners valuable opportunities to maximise productivity of their land, and diversify incomes at a time when these are falling in traditional agriculture and there is also uncertainty over subsidies.

The Scottish government has a target to plant 100,000ha of new woodland between 2012 and 2022, and landowners are being encouraged, with grant support, to consider the benefits of integrating forestry into their land use. Farmers in the Central Scotland Green Network (CSGN) area (see Figure 1) can receive funding from the Scottish Rural Development Programme’s Forestry Grant Scheme (FGS) of up to £8,710/ha towards new woodland planting, including a special CSGN uplift of up to £2,500/ha. Additional monies for fencing and tree protection are available, while farmers also remain eligible for the Basic Payment Scheme. 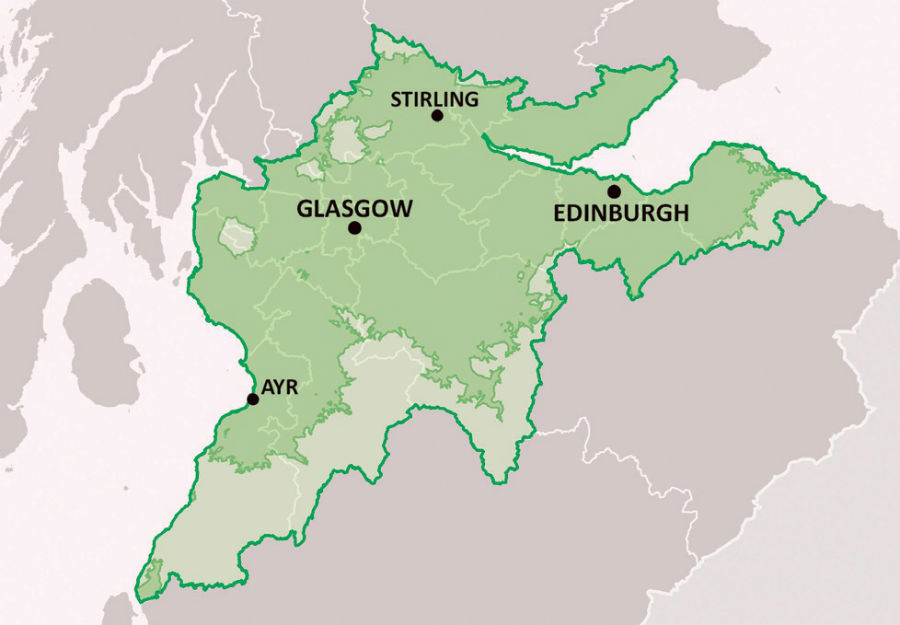 Investing in forestry can bring landowners numerous advantages. We are all familiar with the significant rise in farmland prices over the past decade, yet commercial forestry land has actually been the top-performing UK asset type in the past 15 years, generating returns of more than 10% a year. Returns are generally lower for less commercially focused properties but remain very positive and forestry land values have risen from slightly more than £2,000/ha in 2006 to an average value of more than £8,600 per stocked hectare in 2017, with growth driven by increased demand for timber.

The UK currently imports more than 70% of its timber product requirement, although it is expected that prices will rise due to the weak pound associated with Brexit, so imports will fall and demand for home-grown material will increase. This situation, coupled with a predicted rise in demand in the global timber market of 33% up to 2050 and a lack of recent planting, is expected to lead to shortages in domestically produced timber in the next 20 years. Consequently, investors planting new productive forests now will be in an excellent position to benefit from a ready-made market at harvest.

Tree growth rates in the UK are among the highest in Europe. Much of upland Scotland, for example, is highly suited to fast-growing conifer species. Where suitable conditions prevail, commercial species have potential to grow at an average of around 15 tonnes of timber per hectare per year, with a likely surplus of £20–35/tonne at current prices going to the grower after harvesting costs on land that, in that same period, might produce only 1 or 2 lambs. By growing a future timber resource, landowners can produce an additional income stream, diversifying their businesses as well as producing a source of low-cost wood fuel to reduce heating costs.

The favourable tax regime for commercial forestry should also be considered by landowners. Income realised through the sale of timber and payments received under the FGS are exempt from income tax and, following 2 years’ ownership, commercially managed woodlands will normally attract 100% inheritance tax business property relief. Neither is there any capital gains tax liability on the increase in the value of commercial tree crops, only the value of the underlying land.

In addition, there are wide-ranging benefits from woodland creation that are not related to timber itself. While these are not financially quantifiable, they support optimum business efficiency by providing shelter for livestock to improve live weight gain, helping with disease control and reducing postnatal deaths in lambs. They also contribute to flood risk and climate change mitigation, and support overall biodiversity.