Recently, projects such as Crossrail, the Battersea Power Station redevelopment and the Hinkley Point C nuclear plant have all been in the news because of increased costs. Reports have tended to be negative; however, it is important to understand the causes of such inflation, many of which may have already been accounted for as part of the planned delivery and contracting process.

Likely causes of cost increases that may occur during delivery must be considered and correctly accounted from the a project’s outset, so a sufficient budget can be set. As Crossrail has noted, its Tier-One contracts – those that are directly employed by the client – were not awarded as fixed-price jobs and the contract value at award did not reflect the risks retained by Crossrail Limited, for which an allowance had been allocated.

Risks come in many forms, but RICS new rules of measurement: Order of cost estimating and cost planning for capital building works, 2nd edition, identifies and defines the following:

Inflation risk also comes in various forms of its own, including changes in the tendering context and in the cost of resources, so it is important to identify who will carry the risks of inflation and how they will be accounted for.

Inflation will affect the out-turn price in 2 ways. 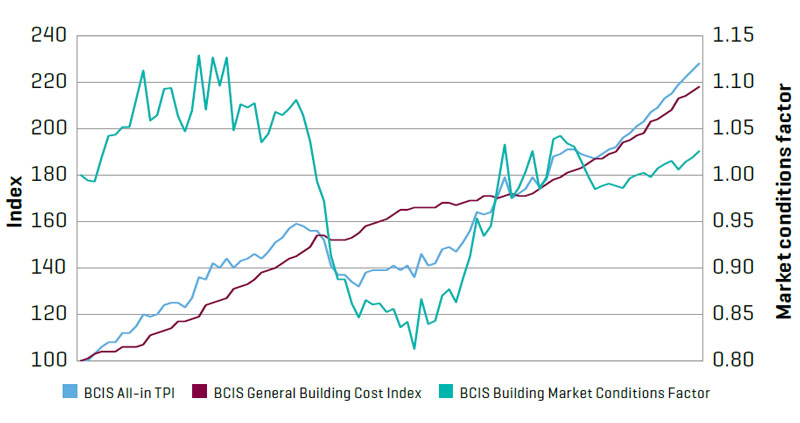 Inflation in market prices will reflect the underlying cost of resources, but will also be affected by tendering conditions and changes in the market, such as increased prices associated with demand, the availability of particular resources, and the effect of major projects on specialist works, trades, work-package and labour-only subcontractors.

These demand and supply pressures can be local, national and international, occurring, for example, when other countries buy major quantities of raw materials. Demand and supply can also be affected by how the UK is viewed by markets; for instance, the fall in the value of sterling has affected the cost of imported materials, while the supply and cost of EU labour will be influenced by how attractive it is to work here rather than in other countries.

It is important to identify who will carry the risks of inflation and how these will be accounted, although ultimately, the client will pay for the increased costs or the contractor’s assessment of them. The client will always bear the risk of inflation, too, up to the point where the contracts are agreed; they may or may not take this risk during the delivery period, but will always pay either for the inflation or for the constructor assuming the risk.

On projects with a fixed-price contract, the inflation risk should allow for the movement in tender prices to the point where the contract is agreed and for increases in costs that the constructor will bear during the delivery period, which may also include some market risk.

On projects that have a single fluctuating-price contract, the client also takes the risk of underlying inflation in resource costs during the delivery period. The most common way to reimburse this cost is by the use of indices.

On projects with multiple contracts let over a protracted period, the inflation risk should consider the delivery programme, and the risk of any changes to the content of the individual contracts and the timing of their award. This will shift the balance of the market-price and resource-cost inflation impacts.

On large, long-term projects, the forecast of the programme of the contract awards, the overall profile of expenditure and the expenditure profile in each contract are often as important as the forecasts of inflation.

Contracts with inflation adjustment clauses differ in the way that they account for this, but most commonly they apply indices, agree a weighting of resources at the outset and calculate a single index for each valuation. This has a distorting effect on longer contracts, though, where the resources used at the beginning differ from those used towards the end.

Figure 2 shows the differential movement in the cost of ready-mixed concrete and steelwork over the period from January 2014. It shows that the effect of steel prices on the cost of the project would differ considerably depending on when it was incurred, but using a standard set of weightings might under- or over-recompense the contractor for inflation. 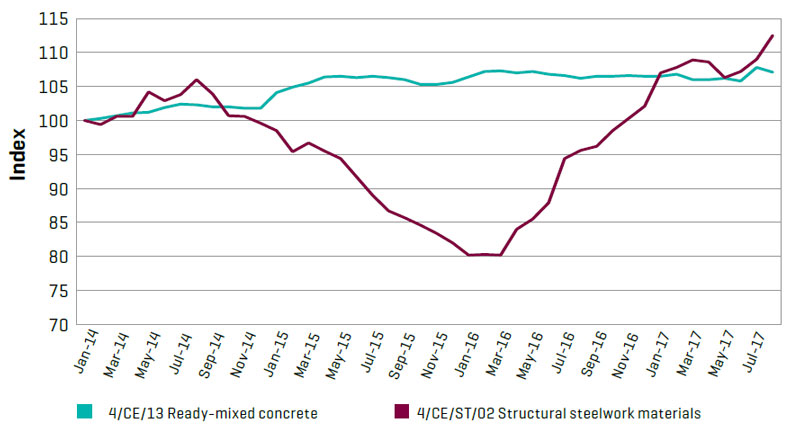 BCIS produces the Price Adjustment Formulae Indices (PAFIs) that were devised by the industry for use with inflation adjustment clauses, but a variety of other indices are occasionally used.

The use of a single generic index may not represent the inflation experienced on a project; modelling an index based on the resources and expenditure profile of a particular project will therefore reduce the risk of inflation for both the contractor and the client.

The PAFIs have been designed to allow for price adjustment on contracts such as NEC, under its Option X1 Price adjustment for inflation; BCIS and Crossrail produced a case study on how PAFIs were applied on the latter’s contracts.

Separate PAFI series are available for:

Assessing the risk of inflation on a project requires forecasts of:

Identifying when different forecasts should be applied will change the inflation risk. An assessment of the impact of delaying or accelerating the award of contracts should form part of the risk analysis.

BCIS publishes 5-year forecasts for tender prices, market conditions and resource costs for both building and civil engineering. In addition to these, BCIS produces bespoke forecasts for clients and contractors on individual projects, sectors and locations.

An inflation forecast that reflects the resources and the programme of a particular project will provide a better understanding of the inflationary risk than a generic forecast.