Nearly all buildings are designed to allow for some movement. If they are not then they very soon fail, because where you get different elements moving at different rates, cracks will occur.

Some cracks can look significant, leading to assumptions about the state of the foundations, but then ultimately prove to be nothing more than a decorative issue; others can appear quite harmless, but develop over time to become a major, costly problem for the owner.

This can make the job of a surveyor tricky, particularly when they are asked to assess a crack from a single visit – say, as part of a building survey. Combined with concerns over complaints and insurance claims, this might lead some to pass the assessment of the problem on to someone else, but they need not do so.

Any good surveyor should at least be able to determine whether what they are seeing is a structural issue or just a cosmetic problem. Most should also be able to offer their client some advice on the probable causes and remedies.

The first step is to consider the severity of the cracks, and BRE Digest 251: Assessment of damage in low-rise buildings provides a good starting point.

Following a study of 130 properties suffering from subsidence, 5 kinds of crack were identified, categorised primarily by width. In simple terms, the study found that categories 1 and 2, cracks of less than 5mm, were essentially aesthetic problems only and unlikely to indicate a significant structural issue. Cracks in categories 3 and 4, of between 5mm and 25mm, were found to cause serviceability issues, such as sticking doors or penetrating damp. Anything in category 5, being more than 25mm, was considered to require structural intervention. 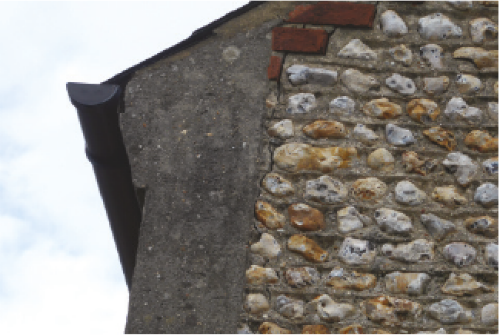 Figure 1: Example of a category 3 crack

This is a simplified approach only and other factors should be considered, such as the number of cracks. For example, several 3mm cracks may only cause a serviceability issue whereas a lot of 1.5mm cracks could indicate a problem with the structure. Categorisation is, however, a good place to begin.

Once the surveyor is sure there is a problem, they should consider what the cause may be. There are many different forms of structural issue, but a few are more common than others.

One common cause of cracks in solid walls is where the force of the roof pushing out at the top is not offset by beams at floor and ceiling level applying force to pull the walls back together; this is known as lateral restraint. The balance of forces in such cases holds the wall in a vertical position, but it depends on those forces being equal.

Where the wall loses its mechanical connection to the floor joists, normally as a result of rot, it can start to pull away, leaving a noticeable bulge in the outside wall. This is easier to see when the masonry has been left exposed, but when a property is rendered it can sometimes be mistaken for bulges caused by blown render. Instances of lateral restraint, as opposed to blown and bulging render, will also normally be accompanied by excessive movement or spring to nearby floors.

A surveyor is more likely to come across this problem when a roof covering is changed from something lightweight, such as slate, to something much heavier. The common example is when heavy concrete tiles are used on a late Victorian terrace’s roof, which would originally been covered with slates: the increased load causes the top of the walls to be pushed out, and because masonry walls do not have much flexibility, horizontal cracks will appear just a few courses down from the eaves.

The outer skin of a cavity wall has almost no structural stability, being too slender to support its height. Instead, it relies on the support of the internal wall to hold it upright. To connect the 2 walls but maintain a suitable cavity, a wall tie is used. In modern buildings, these are normally stainless steel and generally pose no problems, provided they are installed correctly. However, when they first came in to use – around 1910, or a little earlier in some regions – it was more common to use iron.

In many ways iron was suitable for the job, but it does tend to rust and when it does it not only loses strength but also expands. As the wall ties are bedded in to the mortar between the bricks, the expansion forces the courses apart and creates regularly spaced cracks through the mortar matching the ties’ locations. This is a good example of several category 2 cracks indicating something more than a decorative issue. Bear in mind that wall ties can also fail for other reasons without causing cracks to the outside walls, and this can only be seen by inspection inside the cavity.

Most windows and doors are not structural so will need a lintel to take the load of the structure above and distribute it to the surrounding walls – a simple idea that has been a part of construction since people decided that caves were not the most desirable form of property.

Although lintels have been around for a long time, mistakes are often made. One such mistake is where a lintel does not have enough bearing; that is, it may not be extended far enough into the surrounding wall. When this happens, one end of the lintel can often slip where the pressure of the wall above causes a diagonal crack through that wall. 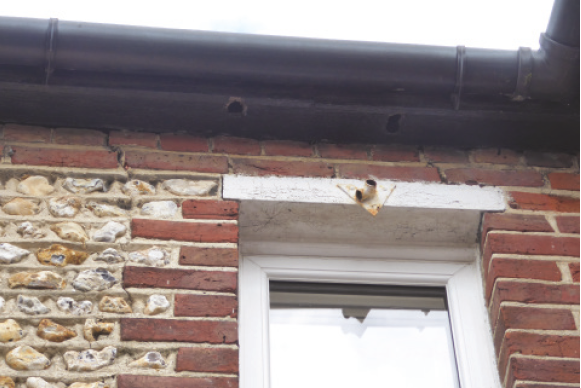 Figure 2: Movement around a lintel

Usually the lintel will stop in a secure position and the cracking will be minor, in category 1 or 2. More severe movement and cracking – category 3 or 4 – can result in sticking doors or windows and repairs will be required.

Even where any movement of the lintel has stopped and is secure, it can still be a problem if the windows beneath are replaced. The older window may have been providing a degree of support, and as soon as it is removed the wall above could collapse. For this reason, it is important to make a client aware of even historic movement of lintels, particularly if the windows are older or in a degraded state.

Where there is any doubt about whether the movement may be ongoing due to insufficient bearing then remedial repairs are required.

Subsidence is often treated as being separate from structural movement, and rightly so. Structural issues develop due to defects in the building, while subsidence is caused by problems with the ground under the building. This is an important distinction because standard building insurance policies will cover subsidence but not repairs related to building defects.

The most common cause of subsidence that a surveyor will see is that caused by trees, which disturb the ground by drawing up water. Even small trees can take a significant volume of water from the ground, while a large deciduous tree can need 50,000 litres per year and in drought conditions can have an effect down to a depth of 6m.

When dry ground shrinks, particularly where it is largely clay, any foundation sitting on it will also move and if the shrinkage only happens under part of a building then cracks will appear. These are normally tapered, visible both inside and outside the property and extending below the damp-proof course; but any cracking to a building that is likely to be over the root system of a large tree should give cause for concern.

As a rule of thumb, a root system is usually of the same diameter as a tree’s crown. As with most rules of thumb there are exceptions; for example, the safe distance for a willow tree is 40m, much greater than the usual crown width.

Just because a tree’s roots may be growing under a building, it does not necessarily mean that they should be removed as this can often cause its own problems. If a tree is not there to take up the water, then the ground expands and will start to push against a building, which is referred to as ground heave.

Although all the above issues will need further investigation to diagnose properly, it does not mean that a surveyor cannot provide meaningful advice to a client from just a one-off, non-invasive inspection.