An increase in cases of new houses being damaged by the collapse of old mine workings is a stark warning to developers and land purchasers to protect themselves from underground dangers, writes Tom Backhouse

Subsidence is an issue that plagues many houses across the UK. Often the result of natural shrinking and swelling of clays during dry or wet weather, subsidence or ground collapse can also occur due to historical mineral extraction.

Subsidence is the motion of the earth’s surface as it shifts downward, while collapse is a more severe form of subsidence and occurs when an existing void reaches the surface and creates a visible depression, often referred to as a 'sinkhole'. These may be caused by natural processes or by a 'crown hole' if caused by human activity, such as mining.

Several types of subsurface mining, and specifically methods that intentionally cause the extracted void to collapse – such as pillar extraction, longwall mining and any metalliferous mining method that uses caving, such as block caving or sub-level caving – will result in surface subsidence. Mining-induced subsidence is relatively predictable in its magnitude, manifestation and extent, except where a sudden pillar or near-surface underground tunnel collapses, which is usually the case in very old, poorly supported workings.

You would expect these subsidence issues only to affect old buildings and property constructed before stricter modern planning and building regulations. However, homeowners at Bayfield Estate at West Allotment on North Tyneside were evacuated in June 2016 and permanently relocated in December owing to severe subsidence damage that initially threatened 5 properties. It was later revealed that this subsidence was probably caused by the collapse of historical shallow coalmines beneath the estate.

These mine workings were undocumented by The Coal Authority (TCA), and without additional data and the interpretation of existing data, the risks were not evident during preliminary due diligence when the land was originally purchased or later when the houses were constructed.

In January 2017, 5 houses on the estate were demolished, costing £95,000. A further 10 were scheduled for demolition, leading to a total housing development loss of value of around £3m.

Bayfield Estate is one of many examples of new-build developments being affected by historic mineral extraction within a few years of completion, and this unprecedented increase in cases is a stark warning for housing developers and purchasers to protect themselves from what lies beneath developments.

With more land, technical and historic industrial data available, as well as the means to interpret and model old mine workings quickly, the onus is on developers, the government and local authorities to carry out more comprehensive research and risk assessment on land for both construction and redevelopment.

The area of North Tyneside is underlain predominantly by the Pennine middle coal measures, a group of interbedded grey mudstones and pale grey sandstones with frequent coal seams, many of which have been exploited by surface, shallow and deep underground mining since at least the 13th century (see Figure 1C). TCA data (see Figure 1) reveals that the Bayfield Estate development area rests on a north-dipping, east–west-trending coal seam, recorded as intersecting the surface at the southern end of the estate.

This seam, the Charlaw/Moorland, is documented to have been mined 200m to the north, coinciding with numerous documented mine shafts. As well as coal, there is evidence that sandstone had also been quarried beneath the western part of the estate. 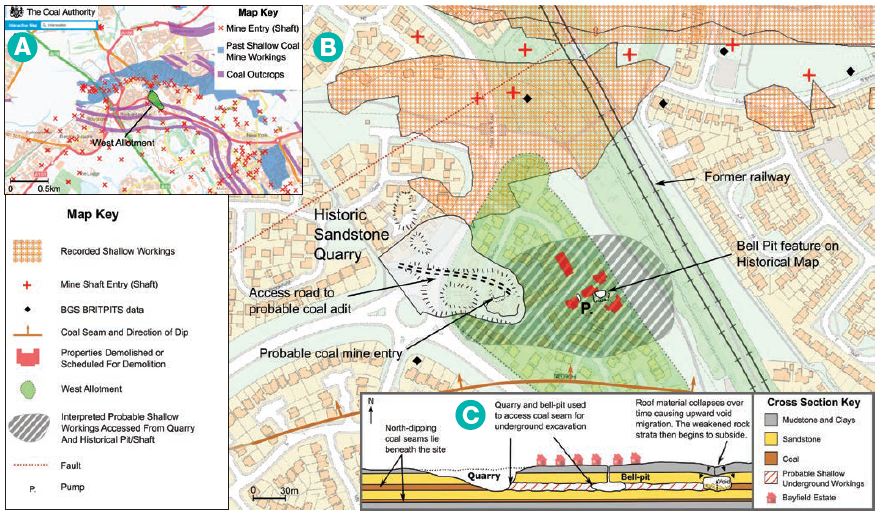 Figure 1C: Simplified cross-section of the quarry, bell pit and likely shallow coal workings beneath the West Allotment, including a hypothetical bell pit illustrating how degradation can lead to subsidence

Mining-related subsidence or collapse can occur from the progressive degradation of subsurface voids, a legacy of historical underground mining activity. These voids can increase in size over time and migrate towards the surface, a process exacerbated by loading the ground above them – for example, by building new homes on previously undeveloped land. This subsidence can warp and damage buildings, manifesting as large-scale cracks in walls and floors, as was the case on the Bayfield Estate.

Much of the West Allotment area falls in a development high-risk area, defined by TCA as a zone in which developers are required to commission a coalmining risk assessment (CMRA) from a qualified mining geologist or engineer before beginning any construction. While TCA data records extensive historical coalmining activity in the vicinity of the site, it does not include documented shallow coalmine workings beneath the site.

Historically, the information required by both planning and conveyancing legislation did not include interpretation, only the reporting of data by answering a series of standard questions on a yes-or-no basis. Gaps in data around the West Allotment area are therefore mistaken as a sign that no workings are present, and areas where there was probably shallow coalmining have been neglected and misinterpreted.

The TCA data – commonly and historically used as the sole source of coalmining data in the UK when undertaking due diligence in land purchase and development – did not reveal any documented historical mining activity beneath the Bayfield Estate.

However, the addition of more varied historical, land, mining, geological and technical data and the interpretation of likely ground movement revealed a different picture. 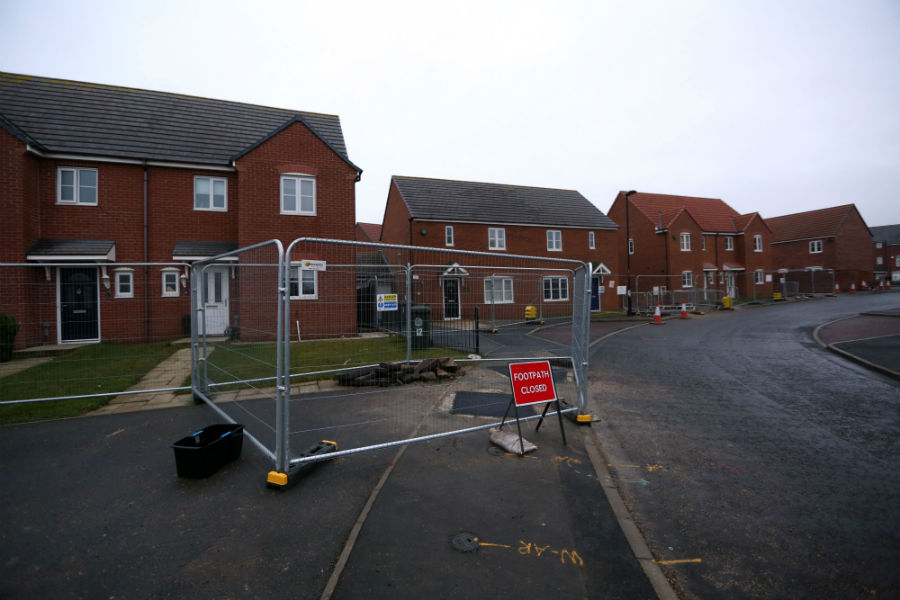 It is now possible to access TCA data and supplement it with detailed historical maps dating back to the 16th century, comprehensive geological information, historical land records, academic research, council records and local site investigation records. This differs from the services of government-run organisations such as TCA, wherein an independent company can hold a composite database and, importantly, use internal expertise to establish links and interpret the gaps between the data.

Mineral extraction must be viewed as a single industry, one that includes the exploitation of more than 60 minerals across the country. But TCA provides data solely on the extraction of coal and brine, so many risks are therefore missed in land due diligence. The extraction of minerals other than coal is thought to have played a crucial role in the subsidence at Bayfield.

The interpretation of the mining risk beneath the estate is based on multiple varied data sets and the application of simple geological and technical rules. First, the Charlaw/Moorland seam that intersects the surface in the southern part of the estate is known to dip northwards beneath the rest of the Bayfield development. We also know that this seam was mined 200m north of this outcrop in the late 19th century at a depth of between 10m and 20m.

The extraction of minerals commonly begins at the surface and extends laterally or vertically underground, as the minerals closer to the surface are exhausted. Based on this knowledge, the Bayfield Estate area lies above what is inferred to be ancient – that is, pre-19th century – shallow coalmine workings, undocumented in TCA data.

Additional records reveal previously undocumented coalmining. Historical maps show features indicative of ground movement or collapse directly beneath the 5 homes that were initially demolished. These features are common in this area and others where early coalmining took place, and represent the surface expression of collapsed 'bell pits', a primitive mining method of sinking a shaft to reach an ore body – coal – where excavation then occurs laterally.

A sandstone quarry, recorded to be disused by the late 1800s with a road running through it, is also documented in historical records of the west part of the Bayfield Estate. To the untrained eye, this may not be directly associated with any risk of subsidence more than 50m to the east; however, by identifying historical land use and the context in which the mining of coal and sandstone has occurred here and in numerous other locations across Newcastle and the UK, the quarry is inferred to be an access point for tunnels driven laterally eastwards from the quarry face. These tunnels or levels would have been driven along the coal seam at a depth of just a few metres, before being abandoned in the early 19th century to leave voids beneath the surface (Figure 1C).

An interpretation of these new findings and TCA data would quickly conclude that this area of West Allotment is at a potentially high risk of ground instability from shallow coalmine workings. Based on the interpretation of all data, it would then be possible to highlight the unsuitability of the site for development, or advise that appropriate site investigations and surveys be commissioned to manage this risk.

The developer in this case was acting on information provided, which did not indicate any substantial risk associated with the site. As a result, the homes were built in accordance with standard UK regulations that do not account for substantial ground movement from shallow or previously undocumented mining activity.

Figure 1B shows that the houses already demolished lie around the bell pit, while those to be demolished are above what is inferred to be the shallow coalmine workings that have extended laterally eastwards from the recorded location of the quarry.

Had an interpretive risk assessment analysing multiple data sets been commissioned before development began, this feature and mining risk model would have been identified. Historical mining activity occurs across North Tyneside, and it is therefore essential that all new homes here and in other former mining areas throughout the UK are properly assessed by an expert who has access to varied and comprehensive data sources and the ability to interpret the risk that the ground poses.

Other examples of former mining areas or areas at risk in the UK include:

These cases prove that the current methods for assessing mining-related risk are inadequate. Building and planning regulations require a ground risk assessment for mining only in development high-risk areas, even though this term applies to historic coalmining alone.

With more than 60 other minerals and commodities extracted throughout the UK, it is essential that the correct procedures and legislation are implemented to ensure cases such as Bayfield and Brickfield Cottages do not occur again. Furthermore, when risk assessment is undertaken in areas of historic mining activity, outcomes must be based on the expert interpretation of multiple data sources so that the developer is equipped to design and manage any residual risk.

It is surprising that given the development of comprehensive modern mining and geohazard data sets, houses are still being built on sites that are inherently unstable. The unprecedented scale of this issue highlights the need for developers and prospective homeowners to consult experts in interpreting the risk of mine-related subsidence.

Tom Backhouse is Founder and Managing Director of Terrafirma