Local consultations undertaken at the concept stages of urban regeneration masterplanning typically result in lists of changes that a community would like to see, with the likelihood of achieving some or all of these influenced by consideration given to physical space, planning, the economy, society, healthcare and community support, financial viability, relevant law and ownership in the regeneration proposals.

The wish lists could include:

Green infrastructure is a term that describes collective uses of green and blue spaces, including woodlands, trees and hedges, agricultural fields, parks and private gardens, green roofs and walls, rivers, streams and ponds. It was defined in the superseded Planning Policy Statement 12 on local spatial planning as: ‘a network of multi-functional green space ... both rural and urban, which supports the natural and ecological processes and is integral to the health and quality of life in sustainable communities’.

Area regeneration initiatives may offer opportunities to develop and enhance existing green environments in or adjoining the area in different ways. Enhancements could, for example, involve the creation of new nature reserves, bird sanctuaries, or country or wetland meadows, where there is sufficient space and potential. Any such improvements could bring ecological and natural environmental benefits to a locality.

These benefits could also improve the overall financial viability of a regeneration initiative in itself. Initial objectives might include a project being self-financing with, say, the private housing element of a mixed-use scheme having to part-subsidise any community assets or affordable housing.

If green infrastructure should have a positive effect on the value of the private housing to be built, as would be expected, then the overall commercial value of the completed project as well as its ecological and environmental credentials could be enhanced.

Creating new green environments as part of schemes where there is limited existing infrastructure to develop might prove much more challenging, however, although there are some striking examples where this has been achieved in urban areas. 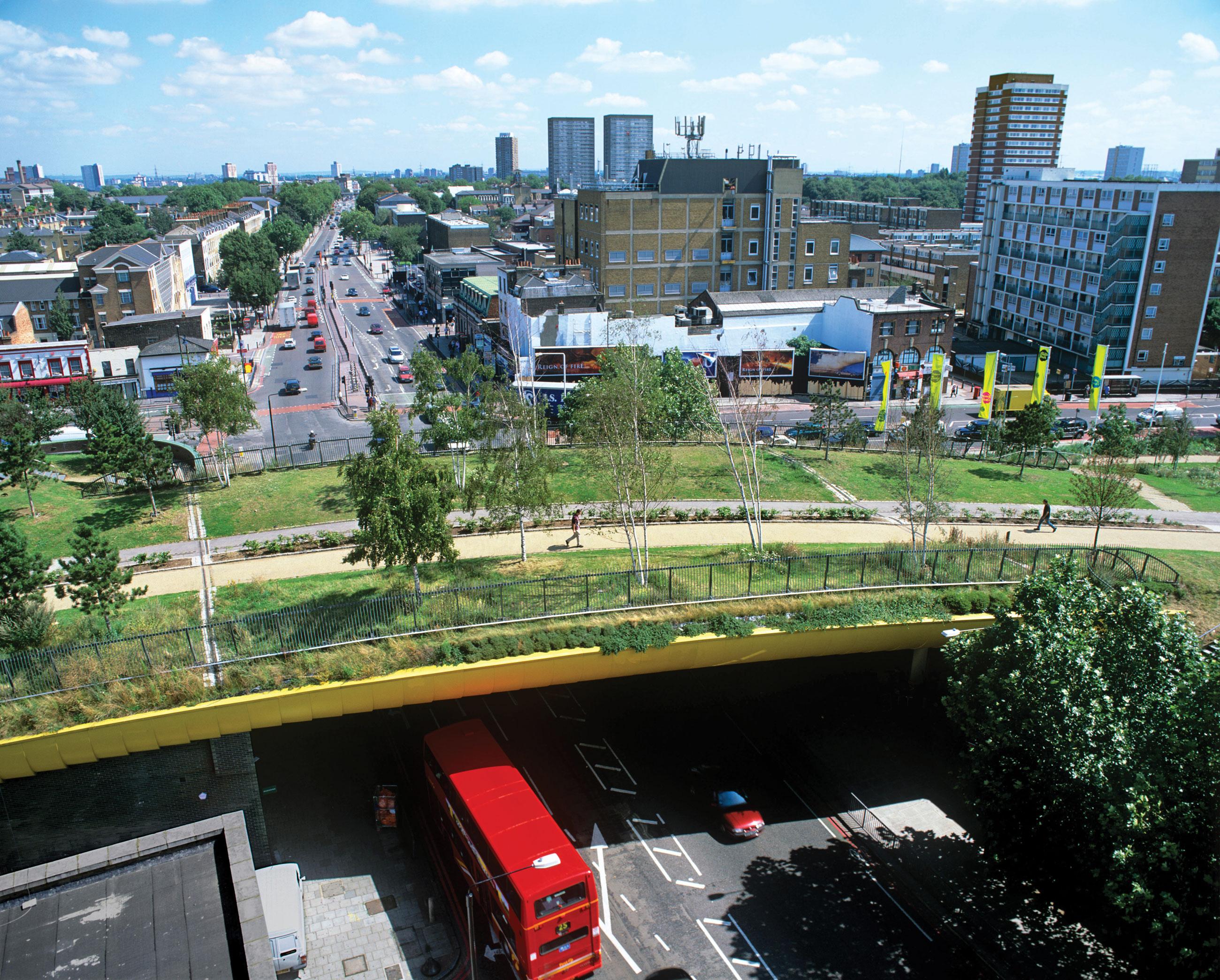 One of the most imaginative such projects in London remains Mile End Park in the borough of Tower Hamlets, a linear green space created on industrial land almost 20 years ago. As it is bisected by the A11, which carries a reported 75,000 vehicles a day, local architect Piers Gough designed a 25m-wide living bridge filled with trees and plants to carry the park over the trunk road (see Figure 1). The scheme, supported by a £12.3m National Lottery grant through the Millennium Commission, includes a hub of shops and restaurants below the bridge linked to Mile End tube station.

Enhancements could involve the creation of new nature reserves

The park has now been developed further with amenities including arts, sports, adventure and south parks, a children’s park and play arena, a terraced garden, and an ecology park that includes a lake, green pavilion, climbing wall and wind turbine. In 2012, restoration works were undertaken to the living bridge to improve its aesthetic appeal, with additional plantations and better seating.

The park has won the London First Award, and its living bridge has received the Institute of Civil Engineers Award of Merit as well as commendations from the Prime Minister’s Award and the British Construction Industry Awards, in acknowledgment of the innovative thinking involved.

A few kilometres away in Stratford, the 230ha Queen Elizabeth Olympic Park is exceptional in a number of ways. Notable features include Zaha Hadid’s sweeping manta-ray design for the Aquatics Centre and the sustainable construction of the velodrome, which includes a lightweight supporting structure to minimise embedded carbon, the extensive use of sustainably sourced wood, a track made of Siberian pine and external cladding comprising around 5,000m2 of western red cedar wood.

As impressive as the specific facilities are, the most striking feature of the park is that it shows how a run-down industrial area of east London, in part a contaminated wasteland, was first decontaminated and then transformed by the planting of 300,000 wetland plants and 10 football fields’ worth of flowers, and the creation of some 35km of interlinking pathways, riverside lawns, wetlands, a water network to irrigate the parklands, and hundreds of habitats to increase biodiversity.

During construction itself, all the soil was cleaned on site with 5 specialist machines, enabling 95% of it to be re-used. Some 98% of material from demolition works was re-used, recycled or recovered, with the bridges in the park being made of gabions, recycled materials and rubble. The watercourse created has reduced flood risks for around 4,000 people living nearby in West Ham and Canning Town.

Integrating green spaces with wetlands, canals and rivers can add to the biodiversity of these environments, with 2 recent examples being area regeneration schemes at King’s Cross and Paddington in north London. The former project, being developed by Argent, will see 2,000 new homes built and 370,000m2 of commercial and mixed retail, arts, education and leisure uses around some 100,000m2 of public space. This will be adjacent to an 8,000m2 nature reserve comprising wetlands, meadows and woodlands, to be managed by the London Wildlife Trust, and there will be extensive planting of more than 400 plant species in the reserve and along the Regent’s Canal, which crosses the regeneration area.

Regeneration of Paddington Gardens at Paddington Basin by Meritas Real Estate, meanwhile, will include not only 335 homes, commercial space and a primary school, but also more than 4,000m2 of green space, the planting of 220 native birch trees, and roof gardens on the new homes.

Introducing green environments in contained urban sites where there is little existing infrastructure or space available can be an even more exacting challenge for regeneration project teams to address, but it does not mean that this is impossible.

As population pressures on land are even more intense in Japan than in the UK, one option could be to borrow Japanese designers’ approaches for UK projects. There are some imaginative examples of how Japanese rock garden designs, for instance, can create simple yet vivid green spaces in comparatively small areas, as can be seen both in Kew Gardens in south-west London, Holland Park in west London, and elsewhere in the UK.

Integrating green spaces with wetlands, canals and rivers can add to biodiversity

Of course, each major regeneration site will have its own characteristics, and is likely to require a bespoke green infrastructure design and delivery plan to make the best use of the land available. This plan should involve regeneration teams taking account of what the likely ongoing maintenance costs of the green environments will be, who will actually undertake this work, and who is to be responsible for its future costs.

Green infrastructure can not only help to improve the mental health and wellbeing of urban residents and workers, but create aesthetically pleasing environments in our cities and towns for the enjoyment of future generations.

Neither should the biodiversity benefits be underestimated. For example, a recent report published by the UN has estimated that three-quarters of the world’s crops, with a reported value of £400bn, rely on bees, beetles, butterflies and other creatures for pollination. With a worldwide decline in numbers of bees, intensive farming methods and climate change all threatening levels and quality of crop production, the creation of new meadows and wetlands, and the planting of flowers alongside roads, hedgerows and canals, could prove vital.