In the second in the series, Mike Parrett considers 2 cases and emphasises the importance of ground condition surveys

My piece in the previous issue gave an overview of the many causes of damp in basements and cellars. This feature looks at 2 cases and how the problems encountered in each could have been avoided. The first case, a residential property, was an example of poor basement design and construction. My organisation investigated an upmarket property where the basement had open light wells leading off the basement rooms. The original design was for any rainfall coming through the light wells to drain by gravity, with gullies connected to a new underground drainage scheme.

The designers did not realise that the external drainage was much higher in the ground than the lowest point of the basement drain gullies. Therefore, due to the invert levels governed by the location and depth of the main sewer, it was only possible to provide gravity drainage to the ground- and first-floor services, while the services to the basement had to be pumped. This fault was only identified after the construction of the basement and external drainage, when it was too late to redesign and repair.

In consultation with the architect, the builder decided to reroute the drainage from the light wells into a new perimeter drainage channel: this passed through the external wall and connected to a similar plastic drainage channel that was installed around the perimeter of the basement’s internal solid floor and terminated in a single collecting sump with pump. The sump was fitted with a small plastic waste pipe connected to the above-ground drainage system; the pump was able to pump water from this, up the full height of the basement.

Regrettably, the scheme still failed to consider rainfall intensity or the number of sumps with pumps required, which meant the new perimeter drainage channels could not cope with heavy or sustained precipitation. This was made worse because they ran over quite a long distance, had right-angled turns and were not laid correctly to falls, so water flowed from them and under the physical drained-cavity membrane system before it reached the single sump.

The result was widespread flooding of the basement areas, with claims made against the buildings insurance and subsequently the architect and construction company.

What caused the problem?

Generally, there should be a collecting sump for every 50 sq. m of floor area; this basement was certainly much larger and so could not cope with large volumes of water. This resulted in the entire existing waterproofing scheme being removed and additional drainage channels being cut into the solid reinforced ground slab to shorten the distance from the open light wells.

Four new sumps with dual pumps and battery back-ups were also installed, connected to the external above-ground drainage system, and these could cope with a much larger volume of water displaced from the open light wells. A new drained-cavity membrane system was reintroduced to both earth-retaining walls and floor and continuously linked and overlapped.

The primary defence against water penetration into basements is to waterproof from the outside. This requires a continuous, impermeable and uniform barrier on the earth-retaining side of the structure that is linked horizontally and vertically. Unfortunately, this is difficult to achieve and often incorrectly installed.

Hydrophobic compounds, called absorbent aluminium phyllosilicates, can also be added to concrete to ensure that it is impermeable by balancing the hydrostatic pressure from groundwater. Products such as bentonite, particularly sodium bentonite, and calcium carbonate are commonly used in poured concrete and contiguous pile basement construction. However, concrete naturally cracks while curing and this can result in failure of the waterproofing integrity where some hydrophobic compounds have been incorporated.

If a new or existing waterproofing design fails, often the only solution is to install retrofit waterproofing - usually internally, as external basement walls cannot be accessed. Further, compounded problems arise when retrofit solutions involve the use of mixed materials, such as a physical damp-proof membrane in the floor slab and a cement-based waterproofing system in the walls. It is very difficult to overlap or connect the vertical and horizontal planes when using these different materials; solutions should be undertaken using seamless, continuous and identical materials for both planes.

On a new-build property, a proper ground condition survey is essential. Specific standards and guidance are available for this, such as BS 5930: 2015 Code of practice for ground investigations and BS EN 22475-2: 2011 Geotechnical investigation and testing, sampling methods, groundwater measurements and technical principles for execution.

When installing below-ground structures, it is essential to understand fully the make-up of the substrata, the resting height of the water table and its fluctuations. This information is crucial for selecting the correct method and design for the basement structure. BS 8102: 2009 discusses 3 principal options for waterproofing – types A, B and C, which are detailed in Table 1 and Figures 1, 2 and 3. 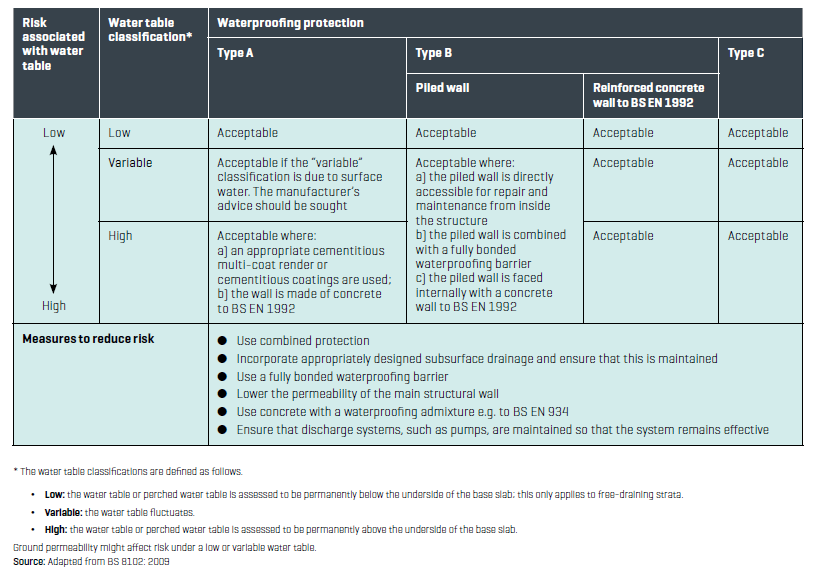 Table 1: Use of different protection types based on water table classification

The second case was a multipurpose arts centre, which was partway through construction. The owners realised that the ceiling height needed to be 1m higher for the planned range of sports and theatrical performances.

As the building’s shell and upper floors had already been constructed, the architects suggested digging down to create the extra headroom. The architects and owners relied on the original geotechnical report, which said works were unlikely to encounter groundwater at a depth just slightly below the level to which they intended digging. A further investigation confirmed that the groundwater was below the proposed level to which the ground floor was to be lowered and, in view of this, reiterated that it was unlikely that works would encounter groundwater.

Some months later, however, the whole footprint of the building filled with water because of a rise in the local water table. The owners then had the huge problem of pumping this out and finding a retrofit solution to mitigate the water levels. The incident also prompted an investigation into who was liable for the water intrusion. It was held that the architect should bear the responsibility, as it had ultimate control over the design and supervision of the construction project, despite the advice from the geotechnical specialists that groundwater would not be encountered.

Instead, the water table observations and monitoring were conducted over a 3-month period, using a piezometer inserted in the ground. The problem was eventually resolved by installing sumps with pumps in the basement floor and a type C cavity physically drained cavity membrane system.

Could it have been avoided?

There should have been a comprehensive design discussion with the client about the minimum requirement for the ceiling height. The groundwater conditions should also have been monitored for a much longer period – at least 12 months – to assess water table fluctuations through all 4 seasons.

Performing geotechnical surveys is crucial when installing basements under existing buildings, especially so-called iceberg properties where there is more floor space underground than above. These constructions need very complex waterproofing solutions and can have a huge impact on surrounding properties. For example, putting additional concrete into the ground displaces groundwater and raises the water table. This could flood basements in nearby properties where the waterproofing may not be of a particularly high standard.

As house prices seem to be rising inexorably throughout the UK, many homeowners are choosing to extend their existing property rather than move. Planning applications for basement extensions have risen by 9% on average, and even higher in some areas, over the past 2 years. Chartered surveyors need to be aware of the issues involved when examining the structure and fabric of any building that includes a basement.

Mike Parrett is a building pathologist, chartered building surveyor and founder of Michael Parrett Associates. He is an Eminent Fellow of RICS and the lead author on the Damp section of isurv