Construction and 3D printing: application in the industry

Over the past 10 years, we have been teased by the potential of 3D printing. There have been reports of the world’s first 3D-printed shoes and violins, for instance, and developments have been hailed as a Fourth Industrial Revolution, which will be so disruptive that it will transform current manufacturing. Anyone will be able to print pretty much anything from the comfort of their living rooms and garden sheds. Consumers will become fabricators, printing kitchen utensils, toys, bicycles, motorbikes and even cars.

But where does this hype about 3D printing originate? The technology is far from new. The first commercial 3D printers have been available since the late 1980s, but the technology has only entered the public consciousness in the past 5 to 10 years.

This surge in interest originates in an experiment at the University of Bath, where Professor Adrian Bowyer took up the challenge in 2008 of developing a machine that could produce an identical copy of itself. The result of this was the RepRap 3D printer, a low-cost device that could reproduce about 70% of its own parts.

The significant breakthrough was not the self-replication, but the fact that the machine cost less than $500 to make and that Bowyer made the plans open source and published them on the RepRap website. Before the RepRap machine, 3D printers could cost anything from $30,000 up to $1m. So once Bowyer published the plans, hundreds of small start-ups were established. Each created versions of that original machine, in most cases for less than $1,500. Suddenly, a large number of dedicated hobbyists could afford to get themselves a 3D printer.

In 2012, I visited the Maker Faire in New York city. It was the first year that there was a 3D printing village, a large tent full of enthusiasts who had got their hands on the early offspring of the RepRap machine. But one of the problems with this 3D printing movement was already evident.

In narrowing down the vast potential of its applications, we can start to refine the technology and transform the way projects are designed and developed

Most enthusiasts were mainly interested in the technology itself – how the printers worked, how to make them print faster, thinner or with more colours, and so on. Nobody was really interested in what you could print with them. Most of the people there were printing the same plastic cup and chess pieces, and none of these were better, cheaper or even more beautiful than the traditionally manufactured versions.

Just because we can 3D print something, doesn’t mean we should. How do we realise the true potential of this remarkable technology? How do we cut through all the hype and headlines to find an application for 3D printing that actually makes things better?

The first and most fundamental question should always be 'Is this 3D-printed item an improvement on the original product?' By this we mean, does it reduce cost, increase efficiency, solve a major problem, or indeed look as though it will revolutionise the market? If the answer is 'no', it’s time to move on to the next thing. But if the answer is 'yes', then things start to look a little more interesting.

In fact, the vast majority of 3D-printing projects hyped in both mainstream and specialist media are vapourware – that is, concepts that will never be realised because there is no compelling social or economic reason to make them happen. So at first glance it appears commercial 3D printing may be a dud as a consumer product. However, there are several applications that have slipped below the media’s radar while completely revolutionising a couple of key industries.

The most likely application in construction would be for architectural connections such as space-frame connectors, customised fittings or ironmongery

The success of 3D printing in these areas is down to the customisable nature of the technology. Everyone’s teeth or inner ear shapes are unique: with 3D printing, every hearing aid or implant can be tailored for the individual. These are also low-volume products, as only 1 or 2 of each will ever be made. If we want to look for the biggest opportunities for 3D printing, we will find them in areas of industry that have similar requirements, where the geometry is small and specific, designs must be tailored, items are high in value and low in volume.

So, how can the technology best be applied in architecture and construction? Buildings are often highly standardised, constructed from elements that are fairly large and made from low-cost materials – essentially, the exact opposite of what 3D printing does really well. 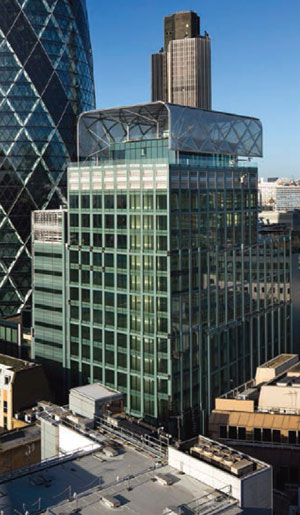 The most likely application in construction, therefore, would be for architectural connections such as space-frame connectors, customised fittings or ironmongery. These are often limited in size, high in value and made in relatively low numbers, as well as being particularly customised on some occasions. But this is a realm that remains largely unexplored architecture.

One good example of a larger-scale application of 3D printing in architecture would be the cladding of a structural node at the 6 Bevis Marks building in London (see Figure 1).

Alternatives made from welded or spliced steel plate were considered, but neither was in line with the design intent of Fletcher Priest Architects, and 3D printing was the only process that could produce the complex geometry of the structural node cladding. Although this was on a much larger scale than hearing aids or dental implants, from a construction perspective the cladding was still a relatively small building element.

It is these smaller, customised parts with more complex geometry where we will see the first significant applications of 3D printing in architecture. In narrowing down the vast potential of its applications, we can start to refine the technology and transform the way projects are designed and developed.

Small but critical building components are perhaps less spectacular than houses that are entirely 3D printed, but that is often the reality of most hyped technologies. In identifying this opportunity now, we will be able to exploit the potential of 3D printing for architecture and construction fully in the future.

Download a complete “Construction and 3D printing: application in the industry” PDF