The discovery of defects in 17 Scottish schools provides a salutary reminder of the building owner’s responsibility for ensuring compliance, warn Michael Dignan and Gary Black

The Scottish public–private partnership project PPP1, agreed between the City of Edinburgh Council and the Edinburgh Schools Partnership, ran from 2001 to 2005. It included the construction and refurbishment of 10 primary schools, 5 secondary schools and 2 special needs schools. All were built by the same contractor. The works were undertaken as design and build projects, and were completed in 2 phases:

On the evening of 28 January 2016, Storm Gertrude hit Scotland and the north of England, causing delays and cancellations to public transport, loss of power to homes and the closure of schools. Gusts of up to 70mph were recorded in Edinburgh.

On the morning of 29 January, it was found that a substantial section of external wall at Oxgangs Primary School in the city had collapsed (see figure 1). The section of collapsed masonry weighed around 9 tonnes and fell on an area frequented by schoolchildren (see figure 2). The City of Edinburgh Council immediately commissioned a team of structural engineers to undertake emergency inspections, and they discovered that there had been a catastrophic failure of the ties in the cavity wall construction. 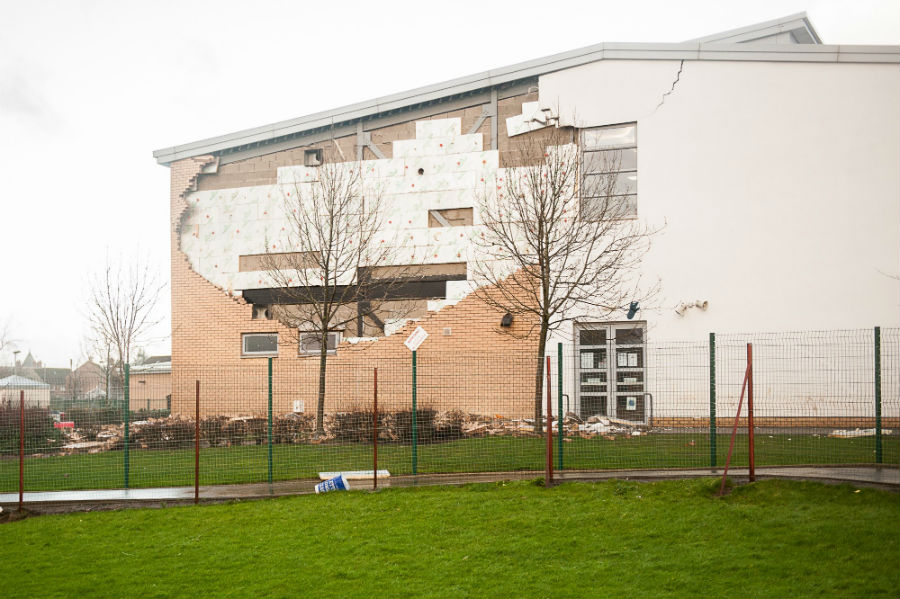 The initial inspections were intended to identify what had occurred, to render Oxgangs safe, and ensure that the pupils could return to a safe environment. However, this was the fifth such incident to occur, and investigations showed that all 5 schools suffered from similar, avoidable issues.

In light of this, intrusive inspections were urgently undertaken to the remaining 12 schools from the project, given that earlier visual inspections had failed to identify any potential defects. Those inspections showed that all 17 schools suffered from the same defect.

The design specification was for a cavity width of 120mm and wall ties of 250mm in length, with a minimum tie embedment of 50mm into each leaf of masonry. Detailed investigations showed that the cavity width varied from 135mm to 160mm, which resulted in insufficient embedment of the 250mm-long ties. It has subsequently been confirmed that, had the walls been constructed in the specified manner, they would have withstood the rigours of Storm Gertrude.

The survey inspections also showed that there were significant issues with wallhead restraints. These are fitted to connect cavity walls to steel or concrete structures and are required to resist high lateral loads. The connecting pieces are usually embedded at regular spacings into mortar joints and connected to the structure using bolts. Unfortunately, it was found that the restraints were either missing or poorly installed and that masonry was being pulled from the wallhead (see figure 3).

As a result of the presence of such serious defects, the City of Edinburgh Council commissioned an independent inquiry into the incidents. This concluded the work was poorly executed, due to:

The inquiry also concluded that each of these issues was ultimately the responsibility of the contractor. 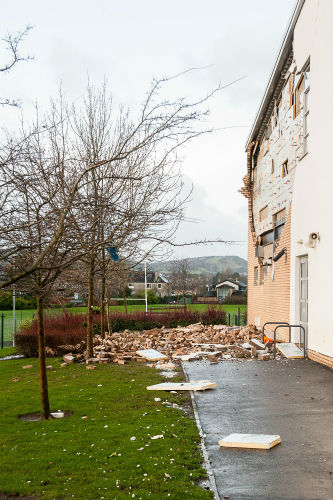 The process is founded on the principle that a building warrant approval must be obtained before work commences on site, although there are provisions in the legislation to regularise instances where such consent has not been obtained.

When PPP1 commenced, the legislation in force was the Building (Scotland) Act 1959, as amended in 1970. Under this act, completion certificates were issued, as after reasonable enquiry, each building as constructed appeared to be complete and in accordance with the approved warrant drawings. The individual scheme of inspections was determined and managed by each local authority.

Statutory documentation to be submitted to councils was limited to:

During PPP1, local authority building control services would, once notified, carry out periodic inspections at key stages during the build. The onus was, and remained firmly, on the owner or applicant to ensure that all works complied with the approved drawings and with the specifications contained in the building warrant.

In addition, if any item had been missed at the vetting of this warrant, there was still a requirement to ensure that what was built on site complied fully with the requirements of the current technical standards in force.

A completion certificate, a satisfactory drain test and a copy of a certificate provided by a competent electrician were in many cases all that was required.

However, a completion certificate issued after reasonable enquiry was not a guarantee of compliance or quality of work. In many cases, the presence of a certificate of completion has been interpreted as offering a far greater level of comfort than it should. The system from which it was derived was an excellent piece of legislation; however, this act quickly became dated and unfit for purpose. 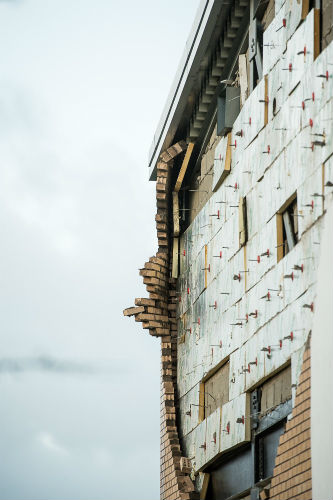 The new system applied to all applications for building warrants received after 1 May 2005. As with every piece of legislation, this prompted a period of transition and a need to adopt revised best practice.

The forum to support this transition was the Scottish Association of Building Standards Managers, which has since been rebranded and changed its constitution to ensure representation of all levels of buildings standards practitioners from Local Authority Building Standards Scotland (LABSS).

On approval of a building warrant, the local authority now issues the approval document and stamped, approved drawings, alongside a document known as a construction compliance notification plan. This document requires the responsible person – usually the applicant – to notify the local authority at various stages throughout the construction process, which provides the authority with the opportunity to inspect if required.

The verifier now collects the evidence as submitted by the relevant person and considers this in conjunction with their  inspection findings to determine whether to accept or reject the application for a completion certificate. At this stage, they can insist on reasonable intrusive inspection as well.

The consequences of the defects at the schools were significant. After it became clear the problem was likely to be widespread, the decision was taken in mid April 2016 to close all 17 schools, resulting in significant disruption and cost for local authorities, pupils and parents.

However, neither of the inspection systems in place under the 1959 or 2003 acts would necessarily prevent such an incident occurring again in the future.

Building standards are a key element in ensuring buildings are designed and constructed to protect the health, safety and welfare of users of buildings and those who frequent buildings. Although the system relies on many components, it puts the ultimate responsibility on the building owner to make certain their completed project is compliant.