Surface water flooding, which is responsible for more than one-third of all flooding damage in England every year, is being exacerbated by a number of factors.

These include a cross-party ambition to build 1m homes by 2020, the increasing replacement of lawns by driveways, road verges being given up for tarmac, and urban areas being infilled with new developments in even the smallest gaps. Along with climate change, this means we are priming a surface water time bomb.

The answer is to adapt the way we build to incorporate more natural features and provide flooding resilience on a range of scales. The principles of sustainable drainage systems (SuDS) are:

Planning policy has required the consideration of sustainable drainage for major development since April 2015. However, these changes to planning policy fell short of implementing the recommendations of the Pitt Review, which was conducted after the devastating floods of summer 2007; neither did they reflect provisions in the Flood and Water Management Act 2010, because no solution for ongoing drainage maintenance was found and SuDS standards were not made mandatory.

Since the new approach was introduced, we have frequently heard how SuDS are not getting built in the form or volume that is needed. Yet data is sparse: there is no requirement for local authorities to report on SuDS uptake, or monitor whether they have been implemented or are effective.

At the Chartered Institution of Water and Environmental Management (CIWEM), we decided to take matters into our own hands, coordinating the largest cross-sector survey of professionals to date. The results show: 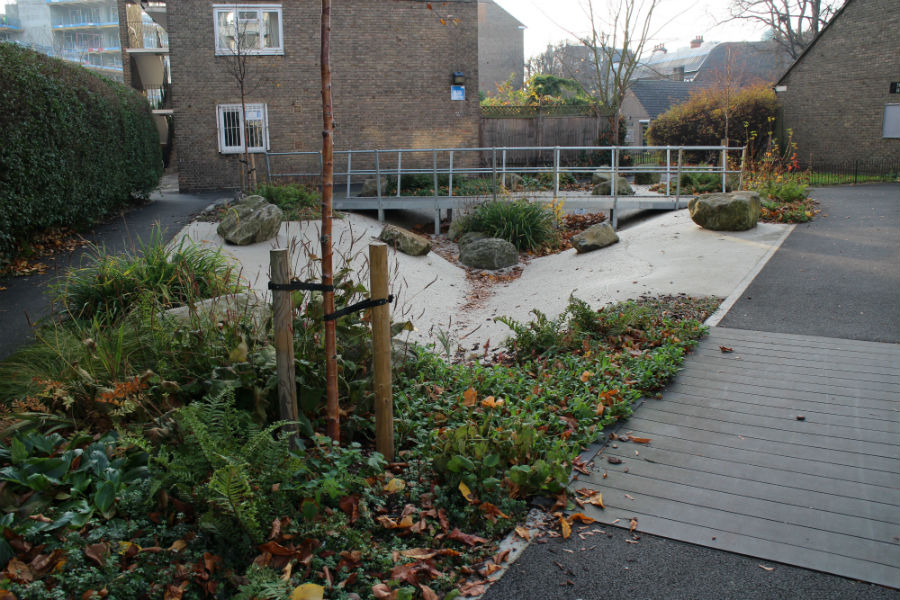 Given the increasing pressure for housing and development and extremely high land values, it is understandable that developers might fear that the inclusion of SuDS could potentially reduce their margins. Economic viability is often cited as a reason not to include SuDS in schemes, with a proportion of our survey respondents perceiving that installing systems might make schemes less practical.

However, many forms of SuDS can be incorporated into the footprint of a building, reducing land take. For example, systems can use pervious paving, tree pits, bio-retention and other vegetated components, green roofs or rainwater storage.

Early consideration of surface water drainage would mean that site layouts were informed by the drainage requirements, rather than the other way around. Our respondents believe that SuDS should be integrated into a scheme as early as possible, with consideration at the masterplanning stage favoured by 71%.

This would allow potential opportunities and constraints to be identified early on and ensure that the space is used as cost-effectively and efficiently as possible, maximising the benefits that can be achieved.

If SuDS can be incorporated without affecting land take, is there evidence that they may reduce profitability because they cost more than conventional drainage? The government’s own data on costs shows that both capital and maintenance cost differences are usually marginal, and SuDS experts stress that they should cost less than conventional drainage if schemes are well designed. Recent research for the Welsh Government, for instance, found that SuDS are cheaper at every scale in terms of both capital and operational costs.

Currently, the wider benefits of opting for SuDS remain unpriced and unrecognised by policy or standards. The problem is that the benefits accrue to many but the costs are initially borne by just one party – a developer, a water company or local authority – so effective policy is needed to rectify this situation.

Pollution from transport and urban waste accumulates in rain flowing across impermeable surfaces, which then contaminates watercourses, especially when so many sewers are operating close to or at their maximum capacity.

Managing rainfall at source ensures that silt and pollution do not flow freely into watercourses, controlling the flow and quality of water for use further downstream. The most effective forms of SuDS combine source control – close to where the rain lands – with successive stages of management that can also include other storage and filtration components.

Only 8% of survey respondents believe that the current non-statutory SuDS standards are encouraging the installation of effective, high-quality sustainable drainage systems in England.

The standards are intended to ensure that drainage matches greenfield run-off rates for new-build developments, but there is no mention of any requirement to implement wider benefits, so the standards can still be implemented using conventional drainage.

Our research indicates that the clear majority of those involved in SuDS provision consider current policy to be ineffective, as many new homes are being built without the full benefits that such schemes offer.

Current national planning policy and practice guidance allows developers to opt out of the requirement for a plethora of reasons on the grounds of practicality or price, when the range of SuDS options available means this is often unjustified. Our survey also identified that costs are being used as a reason to opt out of schemes when in fact they may not be measured at all.

The effect of excluding minor developments from planning policy – with developments of fewer than 10 homes not currently needing to consider SuDS – is another concern, because the cumulative impact of development is a major factor in surface water flooding. Some local authorities have been forward-thinking and developed their own planning policies; however, this is not the case everywhere.

The lack of arrangements being made for the adoption of schemes – clarifying and allocating the maintenance responsibilities for them – is also frequently a major barrier to wider implementation. 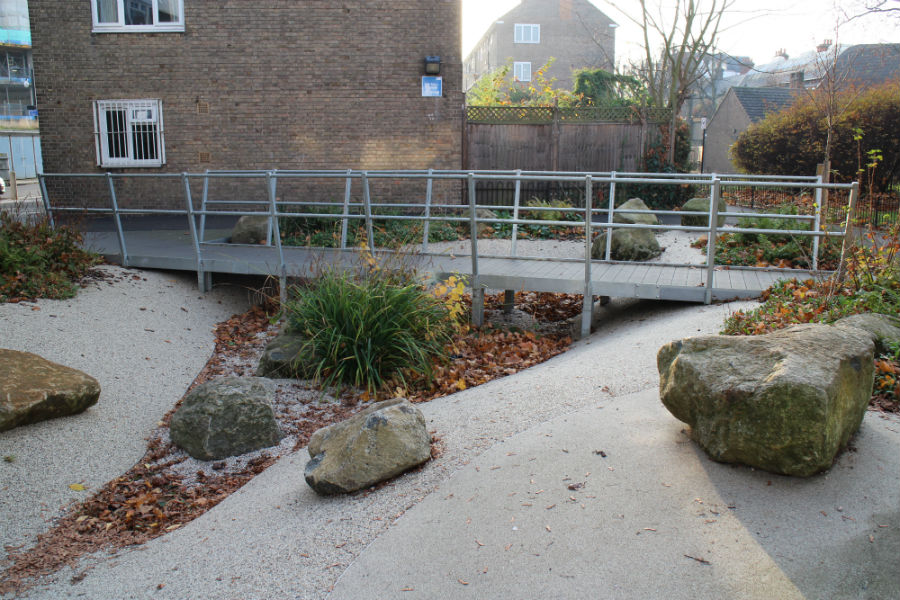 The community charity Groundwork and the London Borough of Hammersmith and Fulham have been working together to demonstrate how retrofitting open spaces on housing estates can be a cost-effective way to improve the capital’s resilience to the effects of climate change.

A large-scale green roof was also installed on one estate, which was incorporated in planned maintenance to the roof to increase efficiency.

The improvements made across the 3 sites were:

The sites are roughly maintenance-neutral, which means that where impermeable surfaces such as asphalt and concrete, for example, have been replaced by gardens that require maintenance, this has been offset by turning other grass areas to meadow. Simple, low-maintenance plant mixes that suit the conditions and provide colour for residents were also grown.

Using evaluation techniques from the Treasury, it was calculated that social benefits of £4.50 accrued for every £1 invested in the project. Contractors and council officers are being trained so they can replicate these measures elsewhere.

The government is currently reviewing its SuDS approach. We hope to see it strengthen policy, standards and guidance to ensure that new homes have well-designed and implemented SuDS, thereby reducing costs and also offering communities greater resilience, wellbeing and amenity.

The main recommendations from our research are that drainage of surface water into sewers should be made conditional on new developments including high-quality SuDS, which reduce flood risk by slowing and storing flood water using natural processes, and to ensure that a clear decision is taken on adoption and maintenance funding.

With both the government’s independent Committee on Climate Change and the National Infrastructure Commission recognising the benefits of SuDS, let’s hope the government itself takes note. It is vital that in building new homes we do not build more risk.