The London skyline continues to be dramatically transformed: there are already 627 buildings of more than 12 storeys, with 455 more in the pipeline and new ones being approved every week.

There are a lot of major underground works also planned or under consideration in the next 10 years, including Crossrail 2, High Speed 2 and the Thames Tideway Tunnel. The latter, a £4.2bn super sewer being developed by Thames Water, is the biggest infrastructure project ever undertaken by the UK water industry at 25km long, up to 65m deep and more than 7m in diameter.

This could increase rates of subsidence in some areas and ground uplift in others, together with higher rates of erosion which, when combined with seasonal variations such as clay shrinkage or swelling, will have unpredictable effects.

Engineers and infrastructure owners and managers are looking for new, data-based technologies to help them protect and maintain a wide range of assets, and there are many world-class technology companies presently looking at innovative structural health monitoring.

Satellite-based remote sensing offers a method of surveying the London region near-instantaneously and comprehensively. Both Google and optical imagery are revolutionising our use of maps and navigation in the city.

Less well-known but in some ways more impressive technology is synthetic aperture radar (SAR). This is currently the most sensitive remote sensing technique available to survey surface movement comprehensively over large regional scales.

Satellite interferometric SAR (InSAR) is a remote sensing technology that involves processing multi-temporal, or time-lapse, SAR images acquired by earth observation satellites to detect, map and monitor surface deformation. It is capable of remotely detecting deformation ranging from millimetres to metres in size, spanning days, months, years or decades, across specific sites or areas of thousands of square kilometres, all over the world.

Since 1991, satellites carrying SAR instruments have been consistently acquiring data across much of the world, establishing an archive of more than 1.5m images; unlike conventional ground-based surveying techniques, this makes it possible to produce retrospective measurements.

SAR images contain information about the position of ground and structures at the time of acquisition. As subsequent images are acquired over the same location, they can be compared and used to map relative terrain motion.

InSAR technology is used widely in the oil, gas and mining industries on a routine basis, to allow the monitoring of a few millimetres’ movement per year over large areas.

Urban areas were also monitored from time to time in an ad hoc manner over the past 20 years; figure 1 gives an example of processed information about ground movement based on historic images of London, with blue dots equating to uplift and red to subsidence. 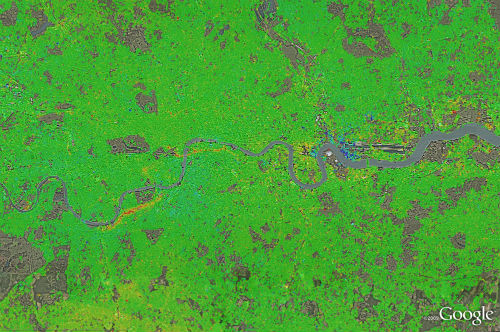 Geohazards that can be observed from this data include:

A new satellite mission called Sentinel is now being developed by the European Space Agency (ESA) to provide robust, continuous SAR data sets and ensure global surface coverage. Each Sentinel mission is based on a pair of satellites: Sentinel-1 is a polar orbiting, all-weather, day-and-night radar imaging mission for land and ocean services. Sentinel-1A was launched on 3 April 2014 and Sentinel-1B on 25 April 2016 (see figure 2). Their regular data acquisitions will underpin the new services described below. 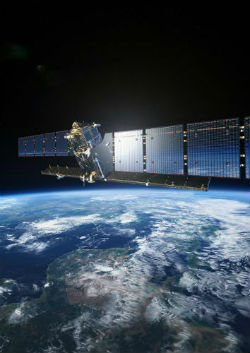 In 2015, a consortium led by UK remote monitoring business Moniteye developed a new data service concept as part of an ESA project. Moniteye has created a city-scale ground monitoring archive by combining all existing ad hoc data from 1992 onwards and filled the gaps with commercially available data. At present, the archive covers the area of Greater London almost bounded by the M25 orbital motorway, including the roads, adjacent land, earthworks and structures.

The service will continuously monitor ground and structural surface movement over the long-term, and the database will be updated regularly with Sentinel- 1A and 1B making repeat acquisitions every 6 days. Bespoke satellite InSAR will be used where it is applicable and commercially justifiable.

Each coloured point on its map of London has an associated history, showing the evolution of the respective locations and applying a set of proprietary algorithms to identify the areas showing changes.

This service is in the process of combining and integrating other data sources and algorithms designed to:

This new archive will provide a data record to help diagnose various geotechnical problems such as subsidence and heave. The work is still in progress and subscription to the service will be available in 2018, but Moniteye can already help. 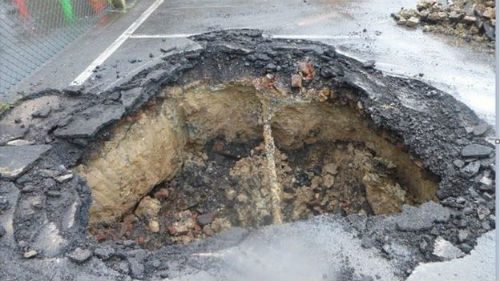 Figure 3: Geological surveys have shown the ground beneath a Harrow primary school to be unstable

A school in Harrow is currently suffering geological instability, caused by ground collapse on the site. The movement is associated with underlying unstable historical chalk mine workings, likely to date from about 1800 (see figure 3). InSAR data can be used to monitor subtle changes in ground level during the ongoing investigation, and prior to or during any remedial works, as a risk assessment tool.

Advisers to the local authority from Peter Brett Associates LLP think that this monitoring capability provides increased confidence for checking altered rates of movement in response to changes in the stress field in the ground over the mine, and that the service can assist with the overall health and safety management of the site.

The author would like to acknowledge H McCormack for helpful discussions in the preparation of the article.

Graeme Phipps is a director at Moniteye