While UK building stock is keeping pace with its carbon reduction commitments it faces a number of challenges to maintain its progress, Keeran Jugdoyal writes

How much carbon dioxide is emitted by the buildings in which you live and work? How about the buildings you develop, refurbish or operate?

Emissions from the UK’s 25m dwellings and 2m commercial and public buildings account for 17% of the country’s direct greenhouse gas (GHG) emissions, according to figures from the Department for Business, Energy and Industrial Strategy (DBEIS). These emissions are primarily a result of fossil fuel use in space heating; but indirectly, buildings also account for two-thirds of the emissions from the power sector, mainly due to electricity demand from lighting and appliances.

Buildings have a crucial role to play in meeting the UK’s carbon targets and fulfilling its commitments under the Paris agreement of 2015, the legally binding carbon reduction plan that aims to limit global warming to 2°C, measured in relation to pre-industrial levels.

Considering carbon dioxide levels globally, the UK as a member of the EU is currently among the 3 regions with the highest impact. Based on 2015 data, China was the single highest emitter, being responsible for around 30% of total global emissions, with the USA and EU following suit at 15% and 10% respectively.

Taking a closer look at carbon dioxide emissions per inhabitant, the UK ranked 16th of the 28 EU member countries in Eurostat data for 2012, with 7.6 tonnes per capita – around 3% higher than the EU average and 2.6 times greater than the number for developing countries (see figure 1). 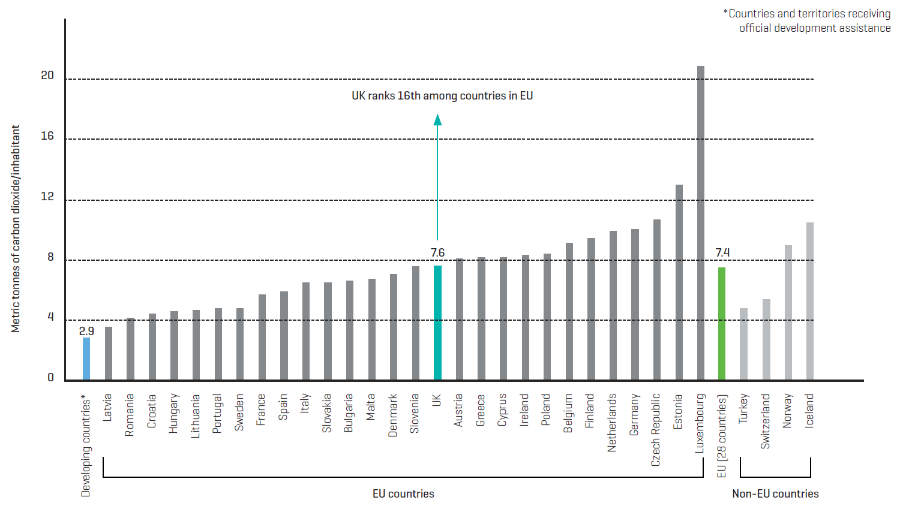 The Climate Change Act 2008 commits the UK to reducing carbon dioxide emissions by at least 80% in relation to 1990 levels by 2050. The implementation plan includes 5-yearly carbon targets from 2008 until 2032, which restrict the amount of GHGs that the UK is legally allowed to emit in those timeframes.

In the latest data, for 2015, UK carbon emissions were 1,569 megatonnes of carbon dioxide equivalent, this being the metric that enables comparison of the respective potencies of different GHGs. A 15% decrease was recorded in the buildings sector in 2014 as a result of reduced heating demand in warmer winters – another impact of climate change – according to DBEIS.

The UK’s independent Committee on Climate Change (CCC) said this figure, together with the current emissions reduction rate, provides confidence that the UK is on track to meet and even outperform its carbon budgets for the second and third periods, 2013–17 and 2018–22. However, to meet its long-term aspirational targets, the UK will need to increase the annual rate at which emissions are being reduced by at least 3%, starting now. For the property sector, this would entail an acceleration in the rate of completion of net zero-carbon new buildings and refurbishments.

Several policies have attempted to reduce carbon emissions associated with UK building stock. These include regimes such as the EU Emissions Trading System, with charges directly linked to emissions. There are also measures such as the Renewable Heat Incentive (RHI)and Feed-in Tariffs, available for using low- or zero-carbon energy sources. A significant driver of policies has been the European Energy Performance of Buildings Directive, which has resulted in the implementation of minimum energy efficiency performance standards in both buildings and the systems they use.

The CCC’s latest projections of the UK’s direct building emissions trajectory to 2032 (see figure 2) show an improvement on the previous trajectory for the residential sector, which could indicate the success of policies and other initiatives encouraging better building fabric performance, as well as wider deployment of energy-efficient appliances and lighting.

In its latest progress report, the CCC also assesses the impact of all policies in relation to projected carbon savings. Some, such as the RHI and the Carbon Emissions Reduction Target for energy companies, have performed well, but others less so, with Part L of the Building Regulations, for example, undermined by the performance gap between design and post-construction carbon emissions.

While great progress has been made in reducing the carbon footprint of new buildings, this is somewhat offset by the low retrofit and replacement rates of the existing building stock. Refurbishment rates stand at around 0.5% for domestic and 1% for non-domestic buildings per year.

As 75–85% of the current UK building stock will still be in use by 2050, there is significant need for effective policy to overcome the technological, behavioural and managerial barriers associated with low-carbon and net zero-energy or carbon retrofits, such as the following:

The property sector acknowledges the need for bridging the performance gap between actual metered energy consumption and the figures predicted during the design stage. Recent research from the Carbon Trust demonstrates that in-use energy consumption can be 5 times higher than energy by end use and carbon footprint predicted at design stage under Part L.

This discrepancy results from standardised assumptions for occupancy hours and controls and exclusion of unregulated loads, and is exacerbated by a lack of building monitoring after occupation. In other words, current predictions tend to be unrealistically low, while actual energy demand is often unnecessarily high, but this is rarely flagged up given the lack of monitoring.

There is therefore work to be done in offering a more realistic representation of a building’s carbon footprint at design stage, aligned with a regulatory framework that will increase visibility and monitoring of operational performance.

Depending on the shape of the final relationship agreed with the EU, the potential economic shock of Brexit over the medium and long-term, as predicted by the Institute for Fiscal Studies and the Bank of England, could mean energy use and emissions both decrease, with a consequently lower carbon budget.

The structure of the economy, population projections and interest and exchange rates could all be affected by the UK’s departure from the EU, which will in turn affect energy demand, manufacturing and agricultural production and the cost of both high-carbon and low-carbon options, the CCC’s October 2016 briefing note suggests.

What can the sector do?

The property professions have an essential role to play in helping the UK government meet its emissions targets. The good news is that the sector offers plenty of opportunities for both adaptation and mitigation, and considerable value can be added by pursuing reduction targets that go above and beyond those of the Building Regulations. This would increase asset value, offer resilience in the face of climate change and enhance health and wellbeing for building occupants.

Creating, assessing and accelerating opportunities for net zero-energy or carbon retrofits of existing buildings is at least as important as maintaining high performance standards for new buildings. To increase efficiency and trigger greater behavioural change for both new and existing buildings, the sector should move from design standards to performance verification standards, and increase public reporting on buildings’ GHG emissions and energy and water use.