In the first article in a new series, Mike Parrett looks at damp problems in basements

Because basements and cellars are the lowest part of a structure, they present a unique set of problems. Basements, which are usually partly above and partly below ground, were often used as servants’ work areas and accessed by an internal or external staircase. Cellars are usually wholly below ground level; they were used for storing solid fuel and would have had a small access hatch outside the building, with an internal stepped entrance.

Other types of cellar were not constructed directly under the main dwelling. These were mainly barrel vaults made of brick, typically located to the front of the property, separated by a small open courtyard or annexed to the lower entrance lobby; other examples of barrel and groin vaults can be found directly under larger important civic, mansion and ecclesiastical buildings, which they also support. Barrel vault cellars were also used for storing solid fuel and extended beyond the curtilage below the pavement or even farther under the road.

Basements and cellars are largely found in pre-1910 buildings and were constructed without any major waterproofing. Lime render may have been used for basements, but cellars would probably have been walled with clay bricks and lime mortar. Most solid masonry walls will experience groundwater penetration, particularly if they are earth-retaining.

Note that, because of their similarities, both basements and cellars will be referred to as “basements” from this point in the article.

In the 19th century, two factors led to extremely damp basements. First, the water table in cities was rising because of the increased number of properties being built, which were also positioned too close together. Second, the lack of properly connected drainage and sewerage was largely responsible for overhydration of the ground and the spread of disease.

Legislation was introduced to address these problems in the late 19th century, such as the Public Health Act 1875 and the London and Bristol Building Acts. The latter tried to separate buildings by a minimum of 1m to improve air circulation and lower the water table, or at least limit its rise. It was not until the very late 19th century that there was connected underground drainage and sewerage and the toilet system was installed in domestic dwellings. Until then, this lack of basic infrastructure caused many of the problems in basements, although it had less of an impact in cellars only used for storing solid fuel.

Today, many basements in older properties experience damp. As water tables rise, the lowest parts of these basements will suffer, so proper waterproofing is essential. However, even the best natural hydraulic lime renders will not resist hydrostatic pressure or prevent water percolating through the top of brick barrel vaults under open pavements. 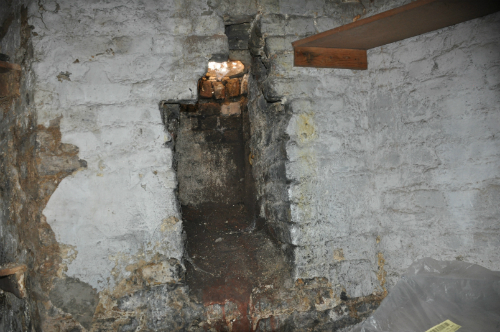 Figure 1: Old narrow Victorian solid-fuel cellar below the entrance hall's suspended floor. The coal chute access is located just outside the front doorstep. Old coal chute access plates can be vulnerable to rainwater ingress unless they are completely sealed.

BS 8102: 2009, the code of practice for protection of below-ground structures against water from the ground, contains an important dictum: that we should expect the water table at some stage to reach three-quarters of the height of the structure in the ground.

As basement rooms are now deemed valuable real estate and increasingly being created or converted, it is not surprising that there are more and more occurrences of damp. BS 8102: 2009 also discusses the need to consider the potential impact of other factors when designing a new basement or waterproofing an existing one. For example, a leaking water main could overhydrate the ground around the basement. Remember, that a high water table may be found at the top of a hill, as a ‘perched’ water table that may hold a reservoir of water on high ground. 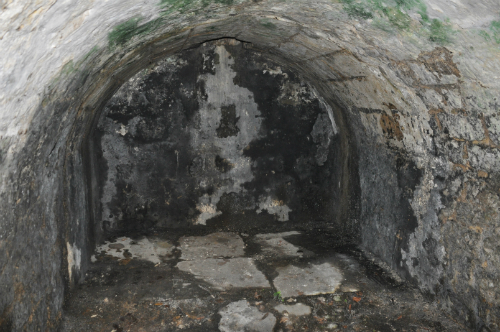 Figure 2: This is a grade II listed Georgian barrel vault, typical of the kind used for storing solid fuel, predominantly coal. It was built under and supports the pedestrian pavement just beyond the curtilage of the property, and is separated from the habitable basement spaces by an open courtyard, accessed from the basement and open external steps.

There are other causes for the occurrence of damp in basements:

These may often have design and construction issues that begin with the party who bears ultimate design responsibility. It is rare for architects, engineers or building surveyors to accept appointments for the design and construction of a new below-ground or earth-retaining structure without advising that a commercial waterproofing or construction company takes on the design and build liabilities and offers long-term guarantees. Over-reliance on commercially conceived and executed waterproofing has led to many cases of water intrusion into the basements and the ground floors of new-builds.

Often, designers or builders do not install a lower geotextile drainage pipe to help drain and manage the water table. Such pipes should be located at the toe of the slab below ground as part of an external attenuation scheme – refer to BRE Digest 245: 2007 (see Figure 3). 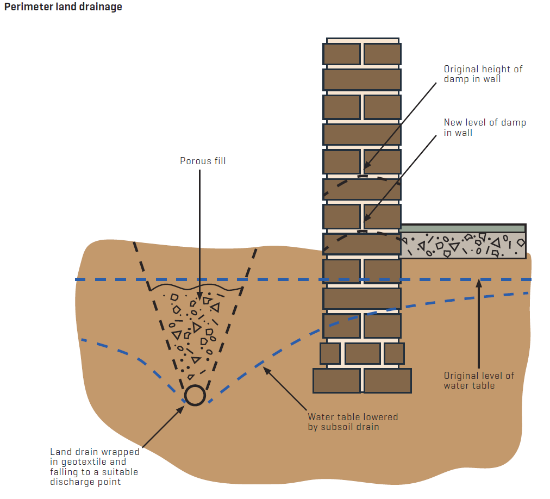 Other common problems include: 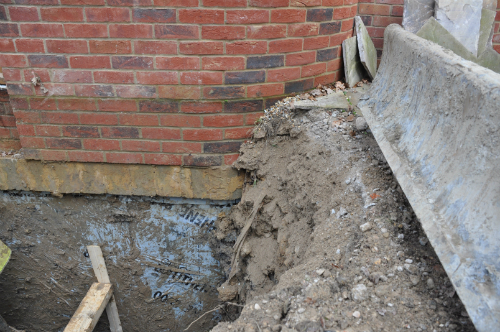 Figure 4: Groundwater penetration into a new-build basement. Examination of external waterproofing showed a poured-concrete structure without protection from the ground. Further examination of the damp-proof course and cavity tray to the upper masonry wall revealed that the basement waterproofing and upper house construction lacked any integrated detailing of the waterproofing above or below ground

However, many local planning authorities have decided that basement alterations should fall under class A works, meaning a permitted development for “the enlargement, improvement or other alteration of a dwelling house”. Kensington & Chelsea Royal Borough Council v Secretary of State for Communities and Local Government [2015] EWHC 2458 provided clarity in its ruling, stating that class A rights should apply equally to extensions above and below ground.

There has been a history of failure and collapse of some basements excavated below existing homes – and that is quite apart from the disruption to the neighbourhood from dust, noise and traffic problems caused by large construction vehicles. A private member’s bill – the Planning (Subterranean Development) Bill [HL] 2015–16 – was tabled to try to tackle such developments, but did not progress through Parliament to receive Royal Assent.

Tip of the iceberg

Despite the arguments for and against creating larger and larger multistorey basements below existing buildings, some local authorities are restricting the depth of these underground basement extensions – so-called icebergs – to one or two storeys.

Westminster City Council is one such local authority: it will be interesting to chart the progress of the Claridge’s Hotel planning application for a 1,800 sq. m, five-storey basement iceberg application lodged last year.

Iceberg basements could have an adverse effect on the local water table and put pressure on any nearby basements that are inadequately waterproofed, possibly causing damp problems. That is why there is a need for a party wall survey under the Party Wall etc. Act 1996 – and perhaps why the Pyramus and Thisbe Club of party wall surveyors played an active role in helping to draft the Planning (Subterranean Development) Bill.

The next article in the series will look at two case studies and identify how damp issues could have been avoided.

Mike Parrett is a building pathologist, chartered building surveyor and founder of Michael Parrett Associates. He is an Eminent Fellow of RICS and the author of the Damp section of isurv