Planning for a rainy day

The planning of UK water infrastructure seems to move in cycles that closely follow major events, from the so-called Great Stink of 1858 – when hot weather in central London exacerbated the smell of untreated human waste and industrial effluent on the banks of the River Thames – to the flooding of the Somerset Levels in 2014.

After the floods of 2007, the government’s Pitt Review determined that the UK was woefully underprepared for the consequences of flooding, and a range of measures were introduced, including the Flood and Water Management Act 2010.

One of the consequences of this piece of legislation was that the ponds of Hampstead Heath in north London suddenly found themselves classified as statutory reservoirs and a piece of critical infrastructure.

The City of London Corporation found itself in the unenviable position of having to implement remedial measures for dams on the heath, so that the area could withstand a theoretical 1-in-10,000-year storm event. A campaign by local residents called Dam Nonsense questioned the logic behind planning for so rare an occurrence, claiming that it would result in irreversible damage to one of the capital’s most valuable and much-loved open spaces.

Landscape architects are often caught between the interests of public amenity and drainage infrastructure, between placemaking and civil engineering. For much of my career, these have vied for precedence in transformation of the urban realm.

It is only in the past few years that we have begun to see a convergence of purpose between the two. Now, green infrastructure means much more than parks and open spaces: it includes provision of space for people, nature and drainage infrastructure.

While to most of us this would seem logical, the pressure for high-density development in most cities often means such space is seen as a luxury that is quickly removed or eroded during the planning process.

The first Wilder Associates projects in China were developed through our relationship with the UK’s Building Research Establishment (BRE). Having designed the organisation’s British innovation parks, we were commissioned to apply the lessons learned on these to a Green Building Park in Beijing, to be constructed by Chinese developer Vanke.

The task was by no means easy, however, as it involved the integration of research and development with the latest thinking on sustainable urban masterplanning.

Our design for the flat, 70ha site concentrated on creating a topography that would improve the microclimate, provide acoustic buffering, and create a landform that enabled the reintroduction of wetlands into part of the city that had seen dramatic loss of such habitats.

The client was not convinced that the proposed lake would ever fill with water due to Beijing’s increasingly arid climate, and it was removed from the masterplan. Yet in June 2012, 6 months after the design was completed, Beijing experienced its worst flooding in 50 years.

The proposed pond would not only have filled but provided a vital – and in hindsight, necessary – flood alleviation corridor, not just for the park but for the surrounding communities too.

Shortly afterwards, President Xi Jinping announced that China could no longer build cities that were likely to increase the severity of flooding in urban catchments. He proclaimed that they must instead act like sponges, absorbing the run-off from hard surfaces and integrating water management into the built environment.

Since then, the sponge city concept has become a focus for the planning of urban wetlands and floodable city parks. One of the best examples is the Qunli Stormwater Park in Harbin City, designed by Turenscape; although many of the other schemes provide space for flood expansion, they still fail to take an holistic approach to the re-use of rainwater or ground infiltration.

In 2013, we at Wilder were approached to develop the Living Lattice building for Meixi Lake Eco City, which would act as an exemplar of sustainability (see figure 1). 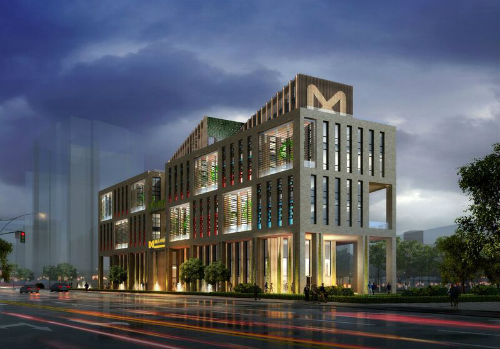 Comfort cooling is the highest consumer of energy in the humid subtropical climate of Changsha, the metropolitan area in which Meixi Lake is situated, and this renders traditional renewables such as photovoltaics and wind power unviable. We therefore had to look at other methods of cooling the building naturally, and the capture and re-use of rain, a ubiquitous resource in the area, became fundamental to climate control.

Water captured at roof level is fed through a series of biofiltration systems and used to irrigate green facades. These systems provide some evaporative cooling as well as a means of reducing solar gain on the glazed facades.

Some facades can be opened and closed depending on the weather conditions, turning winter gardens into outdoor courtyards that further cool the building.

Liquid desiccants in the air-handling system also dry and cool incoming air, reducing the energy required to create a comfortable internal environment, and the captured water is re-used to flush toilets.

In 2015, as part of a collaboration between Tsingua University and BRE, we were given the opportunity to develop a prototype sponge city in Gui’an New District, one of China’s first such projects.

The Gui’an Innovation Park sits at the centre of a new city that will cover an area of 1,700 sq. km (see figure 2) on a limestone karst landscape, in a region typified by pristine waterfalls and rivers at the head of the Pearl River.

One of the primary objectives for the Gui’an Innovation Park was to create a model for a city-wide infiltration system without compromising groundwater quality. Spectacular mountains rise sharply out of the rich, fertile valleys of the Gui’an New District, and contain the remnants of orchards and tea plantations grown on terraces; although the latter have now gone, the terraces have been repurposed to provide surface water treatment.

Biofiltration systems use a wide variety of plants, including fruit trees, to capture silt and pollutants before they have a chance to migrate into infiltration lagoons. This not only provides a green lung for the city, but also a sense of place that integrates the cultural identity of the region into the city masterplan.

All water in the park is seen as a resource, and black, grey and yellow water – sewage, surface run-off and used water, and liquid human waste, respectively – are treated as separate streams, while the captured nitrates and phosphates from the water treatment centre are re-used in the fertilisation of crops.

The visitor centre at the heart of the innovation park will act as an information portal, analysing the performance of the systems and informing other sponge city projects.

The park forms part of BRE’s international innovation park network, which also includes sites in the UK, North America and Brazil. The Gui’an Innovation Park serves not only as a model for future cities in China but is influencing our approach in the UK as well.

Diffuse pollution is now one of the biggest threats to surface water quality in urban watercourses, and often results from poor treatment of run-off. A new approach to urban public spaces will require designers to consider the treatment of rainfall from impermeable surfaces and ageing buildings.

Existing and proposed roads alike will need to adapt and incorporate green infrastructure that traps surface pollutants and absorbs carbon dioxide. We are currently working on a range of projects that will highlight opportunities for existing cities and legacy infrastructure to incorporate rainfall treatment from the moment that rain hits our streets and rooftops.

The grounds transformation project under way at the Natural History Museum in London offered an opportunity to reassess our approach to urban spaces, as Wilder developed the scheme masterplan and is providing the technical design.

The eastern half of the grounds will relate to extinct species and tell the story of the evolution of our planet, while the western half will be dedicated to the story of humanity’s existence in an ever-more urban environment. The scheme considers opportunities to deal with air, soil and water quality, and how public spaces in cities should invite people to reconnect with nature.

The notion of a sponge city raises many issues about how we deal with urban surface water run-off, and it has begun to blur the lines between grey and green infrastructure in the provision of more flood-resilient cities.

Some of these issues, such as urban diffuse pollution and protection of abstraction aquifers, will increasingly be resolved by integration of landscape systems into buildings, streets and drainage infrastructure.

This approach is becoming prevalent in the design and retrofit of buildings and streets in the UK, thanks to advances in technology that can be showcased in innovation parks such as the one in Gui’an.